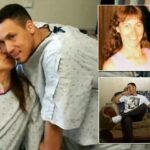 His mother, Ingeborg McIntosh, of Phoenix, Arizona, has raised Jordan from birth and adopted him when he was four years old.

When she became sick with polycystic kidney disease, the family found out she would need a transplant. Unbeknownst to her, Jordan got himself tested and found out that he was a match.

Just in time for Mother’s Day, he offered his mother the ultimate gift: A new chance at life.

“I feel like this was my calling in life, I guess,” Jordan McIntosh told KPHO. “Hopefully I can do more for her as I get older, but for the moment, it’s the least I could do.”

Over the last few decades, Ingeborg McIntosh has fostered more than 120 children. When Jordan came to her as a baby, she says, it was “love at first sight.” She spent four years trying to decide what sort of home would be best for Jordan. In the end, she decided it was her own.

“It might be immediately, or 27 years down the line but something good is going to come your way,” he said.