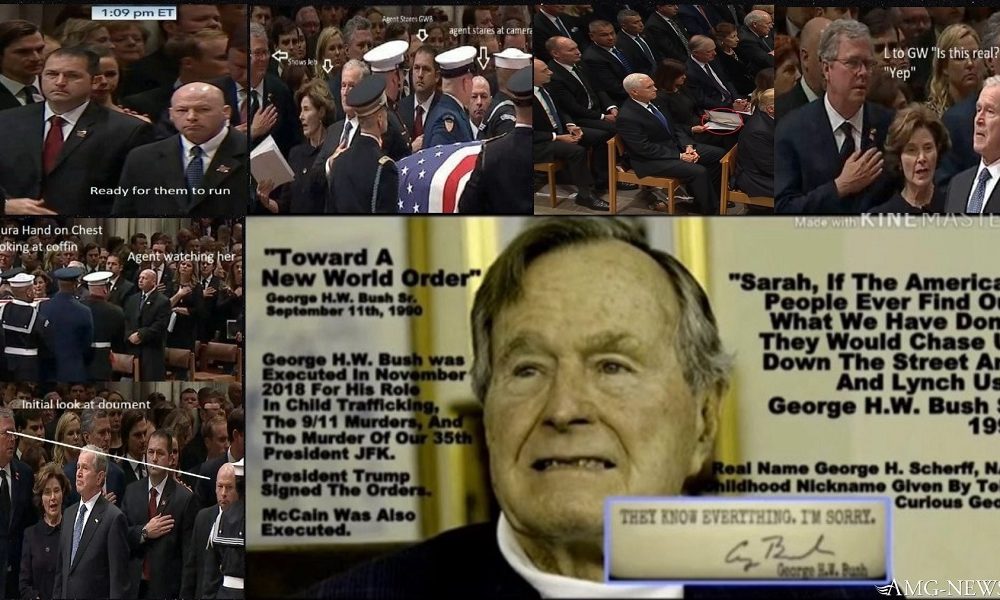 How about Jeb’s face went pale when he opened his?

Do you remember when all the members of the cabal were handed envelopes?

And do you remember how Jeb’s face went pale when he opened his?

If not, here’s a refresher:

► Related: Crimes Against Humanity, List of Indictments, Arrests and Executions

Is this why Mike Pence got one of those envelopes at George H.W. Bush’s funeral?

What was in those envelopes has remained a mystery to us all ever since the funeral. So many theories abound.

And a new one just surfaced , namely, about why Mike Pence got one.

There are a lot of people that think Mike Pence is a Black Hat (not a good guy) and the fact that he got an envelop certainly lends credibility to that theory.

Here’s the theory from Greys Economy:

In the latest drop we get a possible reason why Vice President Mike Pence and his wife Karen received an envelope at George Bush’s funeral last year and why Lt. Gen Michael Flynn was set up by the FBI.

The link to a Sara Carter story shows additional texts between disgraced ex-FBI Special Agent Peter Strzok and his lover ex-FBI Attorney Lisa Page attempting to develope and inside the White House spy during the Trump transition team after the 2016 election.

In quite an extensive article Cater lays out what Strzok and Page had in mind.

Pence’s chief of staff in the early days of the Trump Administration was Josh Pitcock. Pitcock was married to Katherine Seaman. Seaman worked for the FBI and prior to the election worked with Strzok and Page on the Hillary Clinton email probe.

This is why the call it the swamp. The connections are so rife with married couples seldom taking the same name in order to obfuscate the connections.

As you can see above Karen Pence like all the other wives at the Bush funeral received a note inside their programs. Also note behind Pence and to his left a Secret Service agent is monitoring his reaction while the Veep sits directly behind the President.

What the notes contained has never been divulged the reactions by the recipients was not joyous, in fact horror and/or dread was seen on many of the faces after reading the notes.

My high-octane speculation is that Trump’s intelligence team discovered that Pence knew about Pitcock’s activities of spying on the newly elected president and Pence may have also agreed to help Deputy Attorney General Rod Rosenstein with his case of Trump being unfit to serve making Pence president under the 25th Amendment.

I believe Lt. Gen Flynn, Trump’s original NSA Director, has all the details on Pence, Pitcock and Seaman but had his legs cut out from under him by the FBI when Strzok and another agent interviewed him without a lawyer about speaking to foreign officials during the transition.

The FBI had tapes of Flynn on a phone call with the then-Russian Foreign Minister and when Flynn could not recall the exact details of the call the FBI charged him with lying.

This was to disgrace Flynn and keep the Pence spying information a secret. But it did not work.