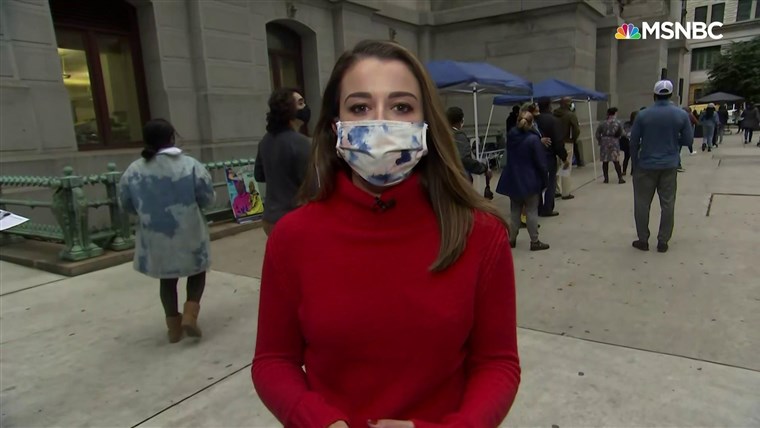 Younger Americans are voting early in droves this cycle, far outpacing their pre-Election Day turnout in several key swing states at this time in 2016.

So far, voters ages 18 to 29 have cast more than 6 million early votes, according to data from NBC News Decision Desk/Target Smart, a Democratic political data firm. Four years ago at the same time, the number was about 2 million.

The increase is visible in states such as Ohio, Texas, Georgia, Florida and North Carolina — swing states that saw substantial early voting last time around.

In each state, more than twice the number of young Americans have already voted in the election when compared with 2016.

The numbers are even more dramatic in Texas. Four years ago, roughly 288,000 Texans between 18 and 29 voted by this point. One week ahead of Election Day this cycle, more than 800,000 have.

The swing is additionally felt in the critical battlegrounds of Pennsylvania, Wisconsin and Michigan, where early voting was greatly expanded this cycle. In Pennsylvania, the early vote among young Americans is more than eight times as large. In Michigan, it’s upward of seven times as big. And Wisconsin has seen their total grow by three and a half times.

The trend is echoed across voting demographics as 66 million Americans have already cast early votes as of Tuesday — surpassing the total number in 2016 by more than 16 million votes. By next week’s election, that number could hit 100 million, the Decision Desk projects.

Among all age demographics, voters in the youngest group skew most heavily toward Joe Biden. In a New York Times/Siena poll of likely voters earlier this month, 58 percent of these voters backed Biden while 30 percent backed President Donald Trump. That poll has a margin of error of 3.4 percentage points.

Meanwhile, a Harvard Youth poll released Monday found that 63 percent of respondents indicated they will “definitely be voting” in the election. In 2016, turnout among young voters was 46.1 percent — by far the lowest rate of any age demographic.

Recent polling shows that while the early vote has broken overwhelmingly for Biden, Trump maintains a substantial advantage among those who have yet to vote.

Looking specifically at younger voters, the percentage of the total early vote they comprise in the major swing states, save for Michigan and Pennsylvania, is on par with 2016. More broadly, Republicans have started to eat into Democratic early voting leads in some swing states.

Navigators Research, which provides messaging guidance to Democratic officials as part of the progressive nonprofit Hub Project, said in a newsletter Tuesday that Biden backers need to “cool our turnout fever.”

Download the NBC News app for breaking news and politics

“There’s no doubt that the uptick in early voting is good for our democracy, but keen observers have a message for Democrats and the left: don’t get too excited just yet,” the group wrote. “Early voting is soaring for a lot of reasons, including ones that might not be good for Biden. We don’t know which ones will be decisive, so we just need to stay vigilant and get out the vote.”

Sean McElwee, co-founder of the progressive firm Data for Progress, told NBC News he thinks the biggest impact of the increased younger vote “will be long term.”

“Voting is a habitual behavior,” he said. “If a cohort of disproportionally Democratic young people vote at an increased rate for next several years, that will spell consequences for the GOP beyond this election.”

Allan Smith is a political reporter for NBC News.