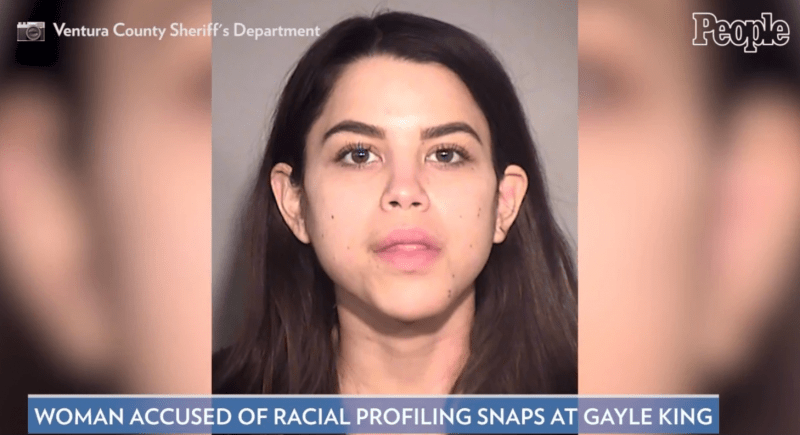 Miya Ponsetto, the California woman facing criminal charges in New York City for allegedly attacking a Black teen after falsely accusing him of theft, said racial profiling couldn’t have stoked her alleged actions, as she, herself, is a “woman of color.”

In newly-aired footage from an interview the 22-year-old did last week with CBS This Morning host Gayle King hours before her arrest, Ponsetto said she is Puerto Rican, and therefore incapable of racism.

Ponsetto was detained Thursday outside her residence in Piru, California.

On December 26, Ponsetto was seen on camera approaching a Black teen and his father, jazz musician Keyon Harrold, in the lobby of New York’s Arlo Hotel.

Ponsetto accused the 14-year-old boy, Keyon Harrold, Jr., of stealing her phone, ultimately tackling him in an attempt to get the phone from him. (Her missing phone was later found at the hotel.)

Detectives from the NYPD flew west and worked in concert with deputies from the Ventura County Sheriff’s Office to execute the fugitive warrant for Ponsetto’s arrest, a police source tells PEOPLE.

The source confirms that Ponsetto didn’t cooperate with authorities, and had to be forcibly removed from her car after nearly slamming the driver’s side door on one of the deputies.

After agreeing to extradition on Friday, Ponsetto was transported back to Manhattan, and appeared in a Manhattan court Saturday for her arraignment.

Ponsetto is charged with two counts of attempted assault, attempted robbery, grand larceny, and endangering the welfare of a child.

She is currently on supervised release, and is due back in court March 29.

Ponsetto did not enter pleas to the charges Saturday. Neither she nor her attorney could be reached for comment Monday.

The Dec. 26, 2020, incident was captured in a now-viral video shot by Harrold. It appears to show Ponsetto confronting the musician and his son in the hotel’s lobby, and falsely accusing the teen of stealing her phone.

Ponsetto apologized during her interview with King, saying she did not mean to make Harrold’s teen son feel “maybe some sort of inferior way.” She also acknowledged she could have “approached the situation differently.”

On Thursday, Ponsetto’s attorney, Sharon Ghatan, told NBC News her client was not staying at the hotel, and instead left her personal effects unattended in the lobby as she was retrieving something from a nearby Starbucks’ bathroom.

When she returned, Ponsetto realized her phone was missing and asked several people in the lobby, including an “Asian gentleman,” if they’d taken her phone, Ghatan said in the NBC News interview. The next people she asked were the Harrolds.

Ghatan insisted the matter had nothing to do with race, telling NBC News Ponsetto “suffers from a lot of anxiety attacks.’

Ghatan said her client “was alone … 22 years old in a city she doesn’t know, absolutely nobody there and her phone had everything about it,” and added her client was “emotionally and mentally unwell.”

“I never, ever meant for it to hurt him or his father, either,” Ponsetto told King last week, describing herself as “super sweet” and questioning how her actions were in any way criminal.

Ponsetto added: “I don’t feel like this one mistake defines me.”