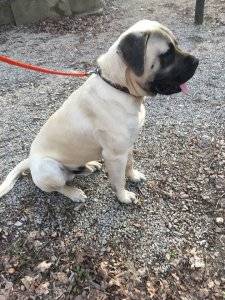 After a day out and about, a woman from Seymour, Indiana was looking forward to coming home. Because her 100-pound English Mastiff named Jackson was at home, Hayden Howard could not wait to see him again. Although he looked tough and threatening, he was a really just a sweetheart. However, when she came home, she noticed that something was wrong with Jackson and that’s when Hayden’s entire world began to unravel before her eyes.

Although Jackson was still in good spirits, Hayden noticed that someone had done something to the dog’s skin. She saw there were a bunch of marks all over him, and it was very strange because there shouldn’t have been anything like that.

“He had some marks on him, and we thought they were bug bites and stuff,” Hayden told Fox 59. Well then Saturday night, I started noticing holes on him.”

That’s when she realized that someone had unloaded dozens of BB bullets into her beloved dog. The cruel animal tormentor had wanted to watch Jackson suffer as they pulled the trigger of a BB gun over and over again, forcing tiny BBs into the dog’s skin.

On Monday, Hayden rushed Jackson to the vet. That’s where the animal health professional confirmed her worst fears. Jackson was loaded with dozens of BBs and pellets. Someone in the neighbor had been unloaded dozens of these tiny metal balls into her dog’s flesh.

“They were just kind of looking at all the little holes and stuff and the more they shaved him, they just kept finding more and more,” Hayden said. She had no idea how much someone was tormenting her dog while she was away from her home. Now she could see that her dog had become target practice for some punk. 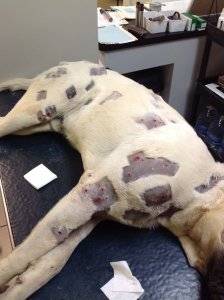 “I was in shock,” Hayden said, tears welling up in her eyes. “I didn’t even know what to think.”

Abuse can be happening right under someone’s nose, and they might not have the slightest idea as to the extent of it.

The vet found Jackson’s flesh housing 20 BBs and 7 pellets. The poor dog had become a pincushion stuffed with metal.

“There was one under his eyelid. There was one in his ear. One in his knee. They were all over underneath of him. They came out there, and (the vet) handed me this little cup and showed me all these little BBs, and I just didn’t know what to say or what to do,” Hayden said.

Who was doing this to the poor dog? Who was taking aim at Jackson and stuffing him full of BBs and pellets? Hayden wanted to know! 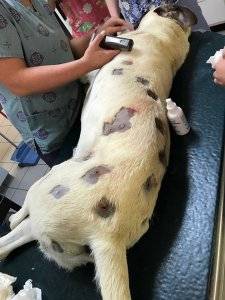 Someone had shot Jackson full of pellets and BBs 27 times. That’s when the Seymour police officer told Hayden something even worse. Although the dog had more than two dozen projectiles lodged inside his skin, the perpetrator probably shot Jackson with at least twice that number since not all of them would have been able to break through the dog’s skin and get lodged inside of him.

While police still investigate, Jackson is in good condition. He’s home taking medicine. And now Hayden has her eyes peeled for the criminal taking aim at her dog.