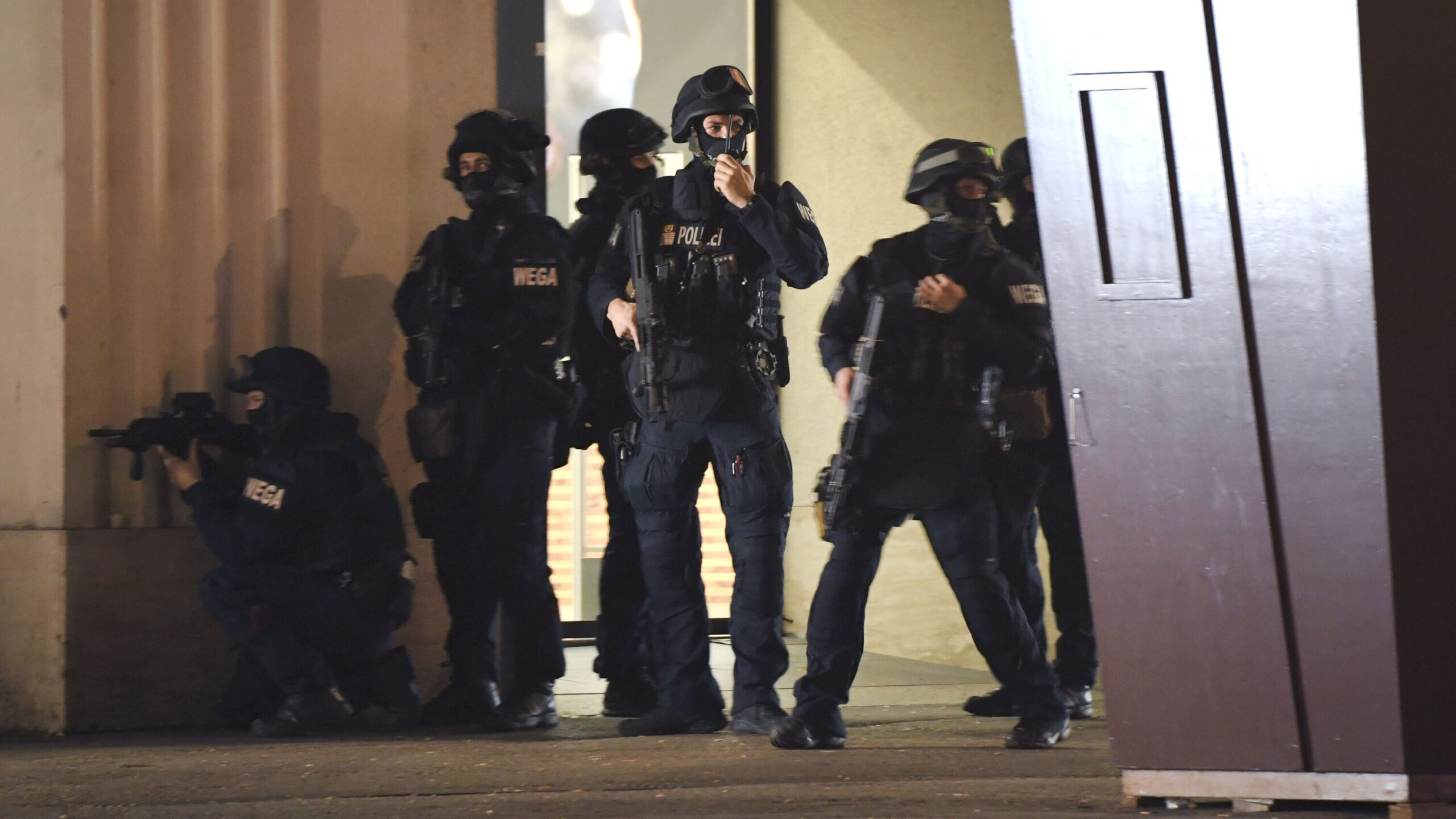 Here’s what you need to know:

‘It is definitely a terror attack.’

Multiple gunmen opened fire in central Vienna on Monday night, killing at least three people and wounding many others, including a police officer, government officials said.

One of the attackers was also killed, they said.

Early Tuesday morning, the interior minister, Karl Nehammer, said that at least one of the attackers was still being sought. He described the perpetrators as “heavily armed and dangerous.”

The Vienna police said the attack, which began around 8 p.m., involved “several suspects armed with rifles.” The gunmen opened fire in six different locations as they made their way through central Vienna, officials said.

The shooting took place in the heart of the Austrian capital, hours before the midnight start of a nationwide lockdown, one of several being imposed in Europe to stop the spread of the coronavirus.

“We have become the victim of a disgusting terror attack that is still going on,” Chancellor Kurz said in a televised address to the nation just before midnight.

As the night wore on, more gunfire was reported elsewhere across Vienna’s First District. Police officials described a chaotic situation, with several “exchanges of shots.” Emergency vehicles blocked off streets, and a streetcar line through the area was shut down.

The chancellor said he had called in troops to ensure the security of Austria’s official buildings, freeing up the police to “concentrate fully on the fight against terror.”

As the immediate danger passed, the city stayed on edge.

Tensions eased a bit as police officers began escorting people who had been trapped in bars and restaurants through security corridors. The opera house and a theater were also evacuated.

But the police maintained a heavy presence in the center of the city as they searched for suspects. More than 150 special police officers and 100 regular duty officers were on duty, and a crisis team in the Interior Ministry was overseeing the response.

“There is a lot to monitor,” Mayor Michael Ludwig said. “Many people are still in the inner city and we have to see that we get as many of them out of there.”

The authorities urged people to stay home and avoid the middle of the city. They also said children would be allowed to stay home from school on Tuesday.

With the target unclear, the authorities discouraged speculation.

The area where shots were first reported is a tight web of streets packed with bars and pubs, known locally as the “Bermuda Triangle.” It is also home to Vienna’s main temple, the Seitenstettengasse synagogue — but it was not clear what the intended target, or targets, of the attackers had been.

The president of the Jewish Religious Community in Austria, Oskar Deutsch, said on Twitter that the initial shooting had occurred “in the immediate vicinity” of the temple, but that it was closed at the time.

“It is not clear right now whether the main temple was the target,” he said.

“Please don’t share any rumors, accusations, speculations or unconfirmed numbers of victims,” they said. “That does not help at all! Stay inside, take shelter, Keep away from public places.”

A mild evening out, and then gunfire.

The attackers struck as Austrians congregated outdoors to enjoy a final night out before the country imposes strict new measures to control the pandemic.

“You could feel a lot of people wanted to get out one more time before lockdown starts,” said Ameli Pietsch, 23, who was in the area an hour before the attack. “It was a mild evening and lots of people were outside.”

All that changed in a moment.

“I am currently in one of the restaurants right next to where the attacks happened,” said Julia Schrammel, a 24-year-old student. “I am here with my cousins because we wanted to spend a nice night together before the lockdown.”

At first, Ms. Schrammel said, the magnitude of what was happening was not clear.

“We just saw quite a few people running, had no clue what was going on, then heard the shooting and a few people screaming,” she said.

The restaurant was eventually locked down. Elsewhere, there were reports of patrons in other restaurants running into the kitchen to hide.

The city halted all trams and subways in central Vienna and repeated the police’s plea for people to shelter in place. That included many who were in restaurants and cafes.

“The situation here is very tense,” Ms. Schrammel said. “It’s safest to stay here. We are surrounded by tons of police and ambulances.”

The sound of sirens and helicopters filled the night air as Austrians struggled to absorb what was happening.

“We are in shock,” said Farnaz Alavi, a 34-year-old human resources consultant in Vienna. “It feels like they orchestrated this attack on the last night” before the lockdown, “when lots of people were out for maximum impact.”

Several people posted dramatic videos of what appeared to be the shooting and its aftermath.

One video showed people helping a wounded person who was lying in a pool of blood, just outside a restaurant on Ruprechtsplatz and less than a mile from the Austrian Parliament building. Several chairs in the restaurant’s outdoor area had been overturned, as if abandoned in a hurry.

Another video showed a man in civilian clothing emerging from a bar or restaurant, then firing a rifle twice down a street.

Yet another video appeared to show the same gunman on the same street, shooting a man with a long gun at close range, then returning seconds later to shoot him twice more with a handgun.

Other videos showed people running for cover or ducking behind obstacles as shots echoed through the streets, and heavily armed police officers taking up positions.

On Twitter, the Vienna police pleaded with witnesses not to post videos and pictures to social media, but instead to send them to the authorities.

World leaders, government officials and politicians condemned the Vienna attacks, offering condolences to the victims and their families.

The French president, Emmanuel Macron, posted a message of support on Twitter in German, in which he referred to the recent terror attacks in his country.

“We French share the shock and grief of the Austrian people after an attack in Vienna,” Mr. Macron wrote. “After France it has been another friendly country that has been attacked. This is our Europe. Our enemies have to know who they are dealing with. We won’t give in.”

“Frightening, disturbing news reaches us from Vienna this evening,” read a statement from the German government, retweeted by Steffen Seibert, a spokesman for Chancellor Angela Merkel. “Even if the scale of the terror is not yet clear: our thoughts are with the injured and victims in these difficult hours. We mustn’t give way to hatred that is meant to split our societies.”

On the eve of the United States election, as many in the country feared potential unrest, President Trump also tweeted his condolences:

“Our prayers are with the people of Vienna after yet another vile act of terrorism in Europe. These evil attacks against innocent people must stop. The U.S. stands with Austria, France, and all of Europe in the fight against terrorists, including radical Islamic terrorists,” he wrote.

Mr. Trump’s national security adviser, Robert C. O’Brien, said in a statement that the country was praying for the people of Vienna. “We stand with Austria, France and all of Europe in the fight against terrorism,” Mr. O’Brien said.

Joseph R. Biden Jr., Mr. Trump’s Democratic opponent, said that he and his wife, Jill, were “keeping the victims and their families in our prayers.” He added, “We must all stand united against hate and violence.”

In Canada, Prime Minister Justin Trudeau called the attack “horrific and heartbreaking” and condemned it “in the strongest terms possible.”

A city that sometimes finds itself in the cross hairs.

Austria — and Vienna in particular — has been a target over the years for terrorist attacks, often with deadly outcomes.

Religious and political tensions, sometimes with no clear connection to Austria, have led to sporadic violence that has killed and wounded both civilians and political figures there.

In 1975, a meeting of the Organization of Petroleum Exporting Countries in the city was stormed by six men with submachine guns. They killed three people and took at least 60 hostages.

A group that claimed responsibility cast the attack as “an act of political contestation and information” aimed at “the alliance between American imperialism and the capitulating reactionary forces in the Arab homeland.”

In 1981, Heinz Nittel, a leader of the Austrian Socialist party and head of the Austria-Israel Friendship Society, was assassinated outside his home by an assailant associated with a militant Palestinian group.

Synagogues in Vienna have also been subject to attack. Two people were killed in 1981 when terrorists attacked a temple with grenades and firearms. The attack came weeks after two small bombs detonated outside the Israeli Embassy.

Just after Christmas in 1985, panic engulfed the Vienna airport when three gunmen stormed the check-in lounge and opened fire with submachine guns, killing three and wounding dozens. Witnesses at the time said the attack began as an El Al Israel Airlines flight was boarding. The attack appeared to be coordinated with another El Al check-in 10 minutes earlier in Rome.

From 1993 to 1997, a series of mail bombs and other explosive devices, including one that wounded the mayor of Vienna, stoked fears of rising neo-Nazi terrorism in the country. The man who was convicted in the attacks said that his goal had been to create a reunification of German-speaking areas.