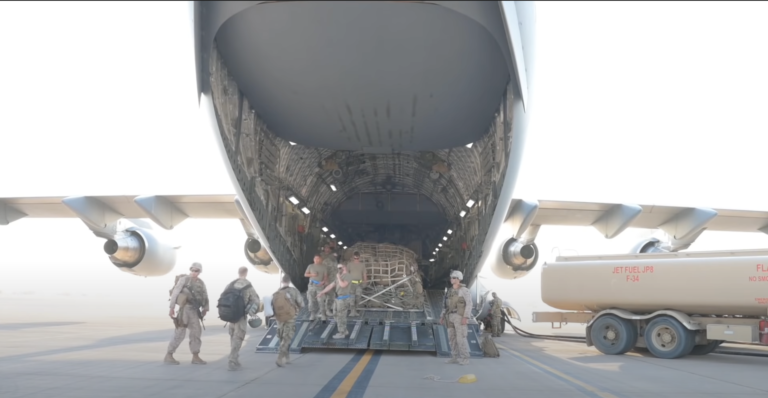 Last week we brought you the story of six American planes trapped in Afghanistan packed with Americans. Grounded at the airport for 36 hours. Why? Because they’re not allowed to leave…   Trending: WHERE’S KAMALA: Vice President Missing In Action?   By whom? The Taliban? No, these Americans are not allowed to leave because of […]

Last week we brought you the story of six American planes trapped in Afghanistan packed with Americans.

Grounded at the airport for 36 hours.

Because they’re not allowed to leave…

By whom? The Taliban?

No, these Americans are not allowed to leave because of the U.S. State Department.

Six aircraft filled with Americans are trapped in Afghanistan because our State Department will not permit them to leave.

This news is from Emily J. Miller, a former senior political correspondent at One America News Network.

She is a DC insider with many contacts in Afghanistan.

There are 6 aircraft in Afghanistan with American citizens onboard that have been sitting on the ground for 36 hours because the @StateDept won’t authorize them to take off with the citizens.

The rest of the thread is text from retired SFO in UAE, part of #ProjectExodus

These are names and positions in the U.S. army.

CHRIS– FORMER EMPLOYER OF THE RET. SPECIAL OPS IN AFGHANISTAN

Aside from her tweets, Emily provided more information on her website.

I’ve talked to special operators in the region and the State Department. I have connected people with phone numbers for the six charter planes. I believe the process will start moving forward to clear those planes to take off with the Americans citizens to a safe place. Then the others Afghans will be taken to a place to process visas and documentation.

The only reason this is complicated is because the government stopped doing its job on Aug. 30, so private citizens (retired military) had to step in and do it. There are no clear lines of communication.

Important to get this fixed in DC. My source is former special operator who is in the UAE:

There are six aircraft in Afghanistan with American citizens onboard that have been sitting on the ground for 36 hours at Mazar-i-Sharif International Airport (OAMS).

We’re in contact with the airline and AMCITs [American Citizens] on the ground. There are currently 5 x A/C (KAM airlines out of UAE) that have been sitting at Mez for 36 hrs because they can’t get the State Department to authorize them to take off with AMCITs.

We have a congressman working it. Originally the DoS denied knowing about them. Once the congressman told them his in contact with the airline who will provide an affidavit that they have A/C on the ground, the DoS is now saying they first A/C should be going wheels up soon.

The planes being grounded and needing someone to take the SIV refugees. At least 2 planes have AMCITs on them. They need to talk to the airline and give them the authorization to exfil. They also need to secure a landing location and refugee location that is still taking Afghans.

And now I have an update for you.

But it’s not good news.

The planes STILL have not left and now they have been taken hostage by the Taliban.

Listen to the update here:

STUCK ON PLANES: @RepMcCaul says Americans and Afghan interpreters have been held hostage by the Taliban for days at the Mazar-i-Sharif International Airport in Afghanistan. #FoxNewsSunday pic.twitter.com/2gJfxNTIfJ

Here’s more from The Gateway Pundit:

As reported earlier, several retired Special Forces and US Veterans traveled to Afghanistan to rescue and bring the people Americans home that Joe Biden left stranded.

The American heroes reportedly have 6 chartered airplanes (four 737s and two others) on the Tarmac in northern Afghanistan with the people rescued and can’t get the administration’s help.

The planes cannot take off unless the Taliban clears them which can easily be handled with a telephone call. Our heroes and the people they rescued are sitting ducks, hostages of the Taliban, who operate the airport at Mazar-i-Sharif. It’s only a matter of time before they’re targeted. The Taliban want recognition from the US gov’t, in order to receive a lot of money.

But much has transpired over the past few hours that will now force the media to report on this huge story.

Congressman Michael McCaul joined Chris Wallace on FOX News Sunday this morning. Rep. McCaul says the planes will not be allowed to leave until the US recognizes the Taliban terrorists as the legitimate government of Afghanistan.

Rep. McCaul is a member of the House Foreign Affairs Committee.

Finally, the State Department is letting out that it’s all true and it’s a hostage-ransom situation. Several news outlets are finally reporting on Biden’s latest nightmare situation. There is great suspicion that the media knew and kept quiet for the Biden gang.

NATIONAL POLL: Would You Like To See “The Squad” Voted Out of Office?

And from The Conservative Treehouse:

During a scripted discussion between guardian of the swamp gates Chris ‘Baghdad’ Wallace and representative Mike McCaul, the House Foreign Affairs Committee (HFAC) member states that six plane-loads of Americans (AmCits) and Afghan ‘interpreters’ are currently being held hostage by the Taliban at Mazar I Sharif airport in Northern Afghanistan.

Notice how Baghdad Wallace has been instructed to steer the framework of the first question to the current status; ie, “Who has gotten out since Friday?” Wallace knows the script. He needs McCaul to deliver on the expectation of the “hostage narrative” that Wallace knows pre-exists in the background. McCaul plays pentagon friendly politics, and Wallace feeds the neo-con’s narrative. Only the first 2 and a half minutes is needed.

We have yet to see a single video of a rescued American Citizen reunited with their family in the United States. No crowds or families greeting the extracted American residents; no human interest stories and local broadcasted news coverage of relieved Americans, husbands, wives, daughters or sons arriving back in their hometown…. nothing.

Five, six or seven thousand Americans reported as saved from the clutches of the Taliban, and not a single human interest story of those Americans arriving home to the waiting arms of their loving family. Not one.