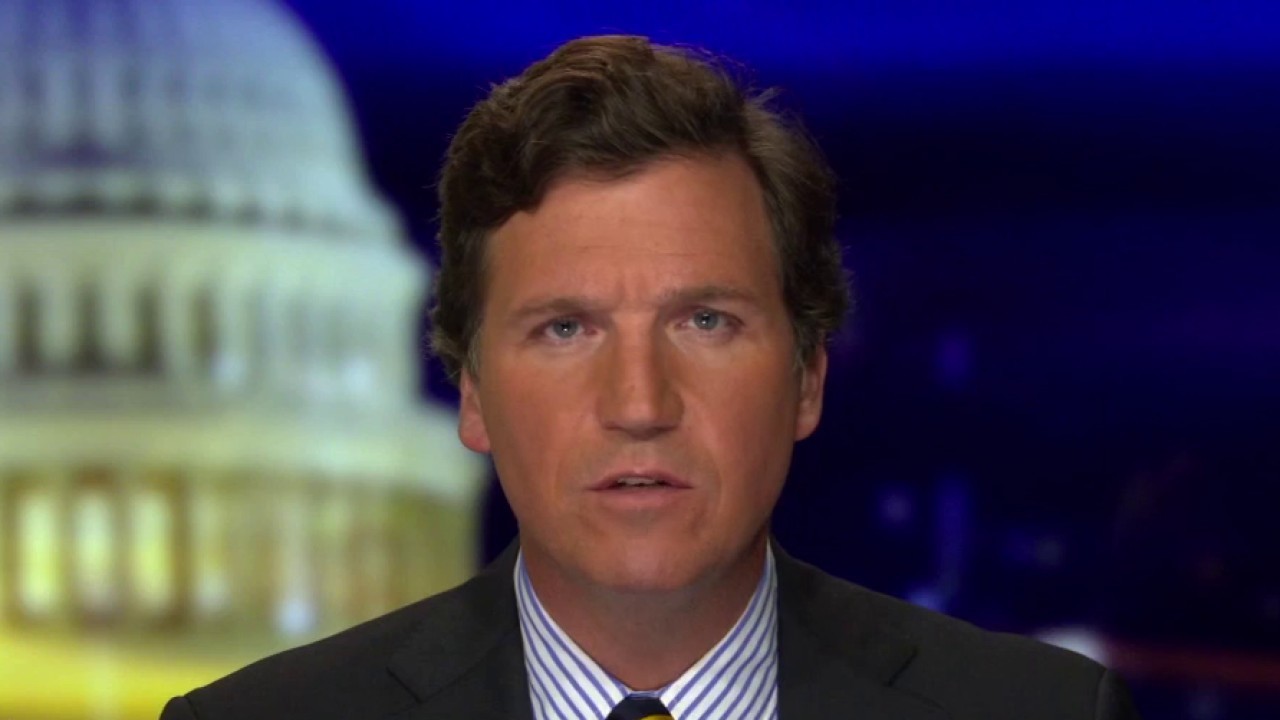 Editor’s Note: This article is adapted from Tucker Carlson’s opening commentary on the Oct. 28, 2020 edition of “Tucker Carlson Tonight.”

Tuesday night, we heard at length and on camera from one of the Biden family’s former business partners. His name is Tony Bobulinski. He’s a very successful businessman and a Navy veteran.

Bobulinski spoke to “Tucker Carlson Tonight” for a full hour. He told us he met two separate times with Joe Biden himself. Not just with Joe Biden’s son or his brother, but with Joe Biden — the former vice president and the man now running for president — to discuss business deals with the communist government of China.

That’s a very serious claim, and whatever your political views, it’s hard to dismiss it when Tony Bobulinski makes it because Bobulinsky is an unusually credible witness. He’s not a partisan, he’s not seeking money, he’s not seeking publicity. He did not want to come on our show.

But when Rep. Adam Schiff, D-Calif., and the Biden campaign accused Tony Bobulinski of participating in a Russian disinformation effort, he felt he had no choice. That was a slander against him and against his family. So Bobulinski came to us. He arrived with heaps of evidence to bolster the story he was telling. He brought contemporaneous audio recordings, text messages, e-mails, many financial documents.

By the end of the hour, it was very clear to us that Tony Bobulinski was telling the truth and that Joe Biden was lying. We believe that any honest person who watched the entire hour would come to the same conclusion.

Well, on Wednesday, a Senate committee confirmed it. The Senate Homeland Security Committee reported that all of Tony Bobulinski’s documents are, in fact, real. They are authentic. They are not forgeries. This is not Russian disinformation. It is real.

Bobulinski told a remarkable story. Joe Biden — who, once again, could be president of the United States next week, was planning business deals with America’s most formidable global opponent. And when he was caught doing it, Joe Biden lied. And then he went further. He slandered an innocent man as a traitor to his own country. It is clear that Joe Biden did that. That’s not a partisan talking point uttered in bad faith on behalf of another presidential campaign. It’s true.

So the question is, what is Joe Biden’s excuse for doing that? What is his version of this story? Everyone has a version and we’d like to hear it, but we don’t know what Joe Biden’s version of the story is, because no one in America’s vast media landscape has pressed Joe Biden to answer the question. Instead, reporters at all levels and their editors and their publishers have openly collaborated with Joe Biden’s political campaign. That is unprecedented. It has never happened in American history.

Wednesday morning, the big papers completely ignored what Tony Bobulinski had to say. So did the other television networks. Not a single word about Bobulinski appeared on CNN or anywhere else. Newsweek decided to cover it, but came to the conclusion that the real story was about QAnon somehow. This is Soviet-style suppression of information about a legitimate news story. Days before an election, the ramifications of it are impossible to imagine. But we do know the media cannot continue in the way that it has.

No one believes the media anymore and no one should. You should be offended by this, not because the media are liberal, but because this is an attack on our democracy. You’ve heard that phrase again and again, but this is what it looks like. In a self-governing country, voters have a right — an obligation — to know who they’re voting for. In this case, they have the right to know the Democratic nominee for president was a willing partner in his family’s lucrative influence-peddling operation, an operation that went on for decades and stretched from China and Ukraine all the way to Oman, Romania, Luxembourg and many other countries. This is not speculation once again, and it’s not a partisan attack. It’s true, and Tony bobulinski confirmed it.

Bobulinski met with Joe Biden at a hotel bar in Los Angeles in early May of 2017, and when he did, Joe Biden’s son introduced Bobulinski this way: “Dad. Here’s the individual I told you about that’s helping us with the business that we’re working on and the Chinese.”

The man I told you about.

Now, written documents confirmed this is real. At one point, Joe Biden’s son texted Tony Bobulinski to say that Joe Biden, his father, was making key decisions about their business deals with China.

CARLSON: When Hunter Biden said his chairman, he was talking about his dad.

BOBULINSKI: Correct, and what Hunter is referencing there is, he spoke with his father and his father is giving an emphatic ‘no’ to the ask that I had, which was putting proper governance in place around Oneida Holdings.

CARLSON: So, Joe Biden is vetoing your plan for putting stricter governance in the company. I mean, and it’s it’s right here in the email.

All this is spelled out in the clearest possible language in documents that Bobulinski provided us, documents that subsequently federal authorities have authenticated as real.

On May 13, 2017, for example, Hunter Biden got an email explaining how his family would be paid for their deal with the Chinese energy company. His father, Joe Biden, was getting 10%.

BOBULINSKI: In that email, there’s a statement where they go through the equity, Jim Biden’s referenced as, you know, 10%. It doesn’t say Biden, it says Jim. And then it has 10% for the big guy held by H. I 1,000% sit here and know that the big guy is referencing Joe Biden. It’s, that’s crystal clear to me because I lived it. I met with the former vice president in person multiple times.

That was three years ago, and we still don’t know where all that money went, because the media haven’t forced Joe Biden to tell us. But Tony, Bobulinski did add a telling detail. Joe Biden’s brother, Jim, saw his stake in the deal double from 10% to 20%. Was Jim Biden getting his brother’s share again? It might be worth finding out.

We also know that according to an email from a top Chinese official, this one written on July 26, 2017, the Chinese proposed a $5 million dollar interest-free loan to the Biden family, “based on their trust on [sic] BD [Biden] family.” The e-mail continued, “Should this Chinese company, CEFC, keep lending more to the family?” And indeed, CEFC was supposed to send another $5 million dollars to the Bidens’ business ventures. Apparently, that money never made it to the business. Where did it go?  A recent Senate report suggests it went to Hunter Biden directly. And from there, who knows? Again, no one’s asked.

Tony Bobulinski also told us he learned Hunter Biden became the personal attorney to the chairman of CEFC, Ye Jianming, just as they were tendering 14% of a Russian state-owned energy company. That was a deal valued at $9 billion dollars. It’s pretty sleazy. It’s pretty amazing, actually, that this happened and no one noticed.

We’re not going to spend the next six months leading you through a maze of complex financial transactions. This isn’t that complicated: Millions of dollars linked directly to the Communist Party of China went to Joe Biden’s family, and not because they’re capable businessmen. Jim Biden’s one business success appears to have been running a nightclub in Delaware that ultimately went under.

No, the Bidens were cut in on the world’s most lucrative business deals, massive infrastructure deals in countries around the world for one reason: Because Joe Biden was a powerful government official willing to leverage his power on behalf of his family.

Now, if that’s not a crime, it’s very close to a crime and it’s certainly something every person voting should know about. The Bidens didn’t do this once. They did it for decades. So the question is, how did they get away with it for so long? Tony Bobulinski asked Jim Biden that question directly. To his credit Jim Biden answered that question honestly.

BOBULINSKI: And I remember looking at Jim Biden and saying, ‘How are you guys getting away with this?’ Like, ‘Aren’t you concerned?’ And he looked at me and he laughed a little bit and said, ‘Plausible deniability.’

CARLSON: He said that out loud.

BOBULINSKI: Yes, he said it directly to me. One on one, in a cabana at the Peninsula Hotel.

“Plausible deniability.” In other words, “we lie.” We get away with selling access to the U.S. government, which we do not own, because we lie about what we’re doing. And as we lie, we try to make those lies plausible. That’s why we call it “plausible deniability.” That is the answer that Joe Biden’s brother gave when asked directly.

So the question is, what is Joe Biden’s answer to that question? We wish we knew.