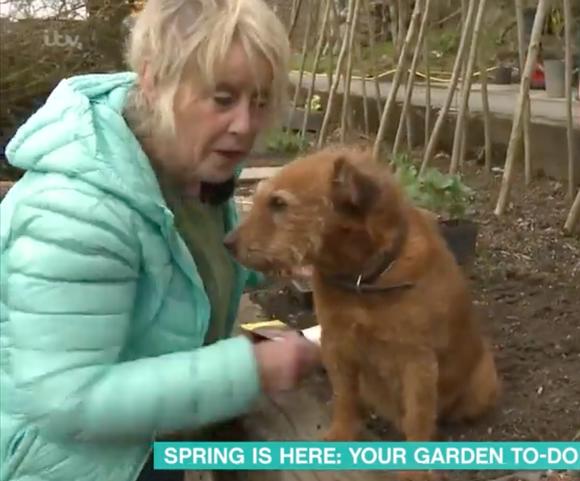 THIS Morning viewers were left fuming when garden expert Carol Klein “knocked her dog out of the way” as she spoke to hosts Alison Hammond and Dermot O’Leary.

Her pet pooch Beefy toppled backwards after the green fingered presenter used one arm to remove him from her vegetable patch.

Carol, 75, was explaining which seeds are best to plant now in time to grow veg in time for summer, as she spoke from her garden in North Devon.

But the adorable dog wanted to be near its owner and trotted up to her as she spoke to Alison and Dermot.

With a handful of beetroot seeds, Carol politely said: “Can you move out of the way slightly please. This way. Thank you!”

Using her arm she pushed Beefy, who stumbled onto his back.

Alison and Dermot cried out in unison: “Awww, Beefy!” as Dermot added: “Her little feet!”

And Carol replied: ” I know you just wanted to look at the dog really!”

But viewers were left unimpressed with her tactic, as one moaned: “Some people just shouldn’t be aloud to have a dog #ThisMorning”

Most read in News TV

One more wrote on Twitter: “That’s it love just knock the dog out of the way #ThisMorning”

Another wanted the dog back on screen, writing on Twitter: “ThisMorning can you tell Carol to bring the Dog back?”

And another said: “Aww poor dog. I’d have bit her hand off 🤣 #ThisMorning”