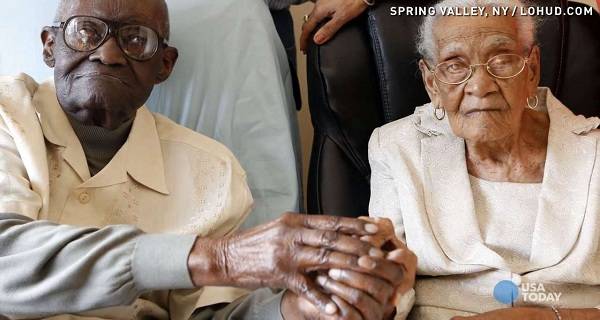 Duranord Veillard turned 109 years in February while his dearly wife, Jeanne turned 105 years in May. They have been together for almost a generation. They got married in November 1932, and the same month Franklin D. Roosevelt was elected as a president. They didn’t know that they are going to live this long and that they are still going to be together. They are an example for many loving couples who one day wish to say their vows and walk down the isle with the person they want to spend the rest of their life.

Duranord and Jeanne Veillard have raised five children, they have moved to the United States in 1968 after Duranord lost his job as a judge and he was awarded a visa to visit the U.S. He settles in Spring Valley.

There he have found a job as a lab technician at the Good Samaritan Hospital and he has worked for 10 years. Then he has retired.

Now, they are living with  their daughter Marie Eveillard.

What’s their secret for keeping the love and happiness in the marriage and being the calm happy family?

Duranord is a good and honorable man, and his son Vely Veillard who is 62 years old, says that at the ceremony he has gave an interview to an reporter and that he wanted to tell him all about their memories because he remembers everything and even he have offered the reporter a piece of birthday cake which was frosted and crowned with the number 108.

Jeanne Veillard wore a white linen dress with a pair of pink slippers, she was sitting next to her husband and never let go of his hand.

At the question how she met her husband, she answered that she has found him in the street, lol.

She made everyone in the room to smile, with her answer.

The Veillard family believes that Duranord and Jeanne are the oldest married couple in the area. They have 12 grandchildren and 1 great grandchild.

Every morning Veillard wakes up at 5 am and he does 5 to 7 push ups, takes a cup of tea, oatmeal and fresh fruit for breakfast and that is how he starts his day. For lunch and dinner they  eat fish and fresh vegetables and they always sleep early and very often.

The couple are always indoors except to see the doctor neither walks without assistance. But both are looking forward to celebrate another landmark in their life.