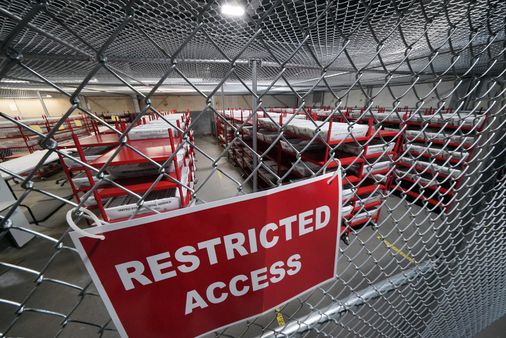 “We would need a super-close election that comes down to one or more of these battleground states making the difference in who wins the election,” said Josh Douglass, a professor of election and constitutional law at the University of Kentucky College of Law.

The ruling in the Pennsylvania case, which refused — for now — a fast-tracked plea from Republicans to block a three-day extension of the deadline for receiving absentee ballots, left open the possibility of later action by the court. Pennsylvania officials issued guidance to county boards to “securely segregate” any ballots received after Election Day, allowing them to be identified in case of future legal action.

Ballots arriving after but postmarked before Election Day also are being put aside in Minnesota, where a federal appeals court suggested Thursday that those votes would likely be thrown out. The last-minute change could invalidate thousands of ballots cast in good faith, but delayed while in transit by an overburdened postal system. Minnesota Secretary of State Steve Simon told reporters Thursday that nearly 400,000 mail-in ballots requested still have not been returned. He is considering filing an appeal to the US Supreme Court.

Should these cases come before the court again post-election, opinions from conservative justices — namely Justice Samuel Alito and Trump-appointed Justice Brett Kavanaugh — suggest they would vote to throw the ballots out. Justice Amy Coney Barrett, who joined the Court on Tuesday, did not participate in this week’s decisions because she did not have time “to fully review the parties’ filings,” but she has not indicated she will recuse herself from future election cases that come before the court.

But election experts emphasize that for those segregated ballots to be relevant again they would need to be dispositive, meaning greater than the margin of victory and therefore decisive in determining the winner of the presidential election.

The main question at play in Pennsylvania, where polls currently show Democratic challenger Joe Biden in the lead, revolves around whether election officials should count ballots received within three days of Election Day, even if they did not have a legible postmark. Such conditions will likely only apply to a small pool of voters.

“This is a fight about an increasingly small percentage of people. Don’t get me wrong, to every single one of those people affected by these circumstances, this fight matters, but it is unlikely to be a deciding factor,” said Justin Levitt, an election law expert at Loyola Law School.

Of course, we need not look too far back in history to find a scenario wherein a handful of votes and a Supreme Court ruling dictated the fate of the election. Back in 2000, the contest between George W. Bush and Al Gore boiled down to 537 votes out of six million cast in the battleground state of Florida. In a 5-4 vote, the Supreme Court justices ruled to halt a recount of 61,000 ballots that the voting machine had missed, effectively granting Bush the presidency. Douglass, the election expert from the University of Kentucky, dubbed the series of events in Florida as “the perfect storm.”

“I get why people are super anxious about it this year. Every time you get a black swan event it immediately becomes more salient so you think it happens more often,” said Levitt, referencing the theory coined by risk engineer Nassim Nicholas Taleb, wherein an unpredictable situation occurs that is beyond what is normally expected and has potentially severe consequences.

“But that’s not how probability works,” Levitt continued. “If Vegas has a payout for a natural royal straight flush and one lands at your table, get up and walk away. It’s not going to happen again. It is easy to think that there is another one coming. And it is possible, but it is exceedingly unlikely.”

That does not mean that Tuesday will not be preceded by a wave of litigation, which typically occurs after every presidential election, and could be heightened this year amidst a pandemic that has upended many normal voting procedures. In 2016, lawsuits called for election recounts in Michigan, Wisconsin, and Pennsylvania, all of which Donald Trump won by less than 1 percent and could have tipped the electoral balance in Hillary Clinton’s favor. But the challenges were dropped shortly thereafter.

But Trump is particularly litigious and harbors an affinity for using lawsuits as cudgels and publicity stunts. Before entering office, he had been involved in 3,500 lawsuits, the majority of which he or his company had initiated. If his campaign decides to pursue litigation surrounding, say, an allegation of election fraud, which he has nodded to in passing several times during the election cycle, then they will need to go far beyond a talking point or a Tweet, according to election experts.

“It is one thing to talk in broad generalities about an election being ‘fraudulent’ or ‘rigged,’ and very different to be able to actually bring that case in a granular precinct-by-precinct, state-by-state way,” echoed Ben Ginsberg, the election lawyer who led the Bush campaign’s legal strategy in 2000, during an online event hosted by the German Marshall Fund of the United States.