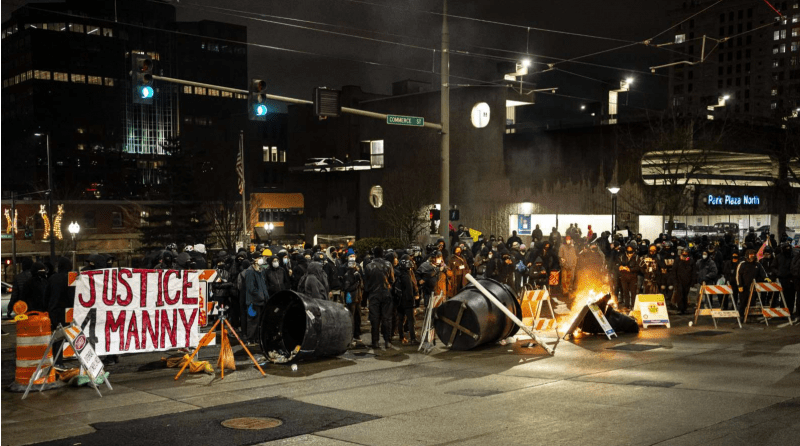 Protesters gathered in Tacoma, Washington, on Sunday night, a day after an officer plowed through a crowd with a police vehicle.

More than 100 people gathered at the same intersection where the incident had occurred, The Tacoma News Tribune reported.

On Saturday evening, the police officer drove into a crowd of people near S 9th Street and Pacific Avenue and ran over at least one person before driving off, according to a video posted on social media.

Tacoma police spokeswoman Wendy Haddow said about 100 people and multiple cars had been blocking the intersection when police arrived on Saturday.

During the response, Haddow added, a police vehicle was surrounded by people. She said the officer inside feared for his safety and tried to back up, but was unable to do so. Instead, the officer drove forward, hitting one person, Haddow said.

Two people were hospitalized with injuries that weren’t life-threatening and one has since been discharged, the newspaper reported.

The officer, a 58-year-old man who has been with the Tacoma police for almost 30 years, has been placed on paid administrative leave, the department said.

The Pierce County Force Investigation Team is independently investigating the incident as a deadly use of force.

But the protesters who gathered at Frost Park on Sunday called for the officer to be fired and criticized what they described as a lack of transparency from city officials.

The News Tribune reported that the demonstration began peacefully, with protesters calling for police reform and justice for Manuel Ellis, a Black man who died in police custody in Tacoma last March.

“They feel like they can do whatever they want and just run over people,” a protester identified only as Anthony told the newspaper. “It’s just not right.”

However, videos on social media showed buildings and cars were vandalized as the crowd moved through downtown Tacoma. Other clips showed that trash was set ablaze in the street.

Protesters also gathered outside Pierce County Jail, where they rattled fences and chanted “Free them all.” Windows of jail buildings were also smashed, according to a video posted on Twitter by Brendan Gutenschwager.

By about 11 p.m., police confirmed that the protesters had dispersed and no injuries were reported.

“The demonstration has broken up and the roadways are clear,” the Tacoma Police Department tweeted. “There are no known injuries in relation to the demonstration. Thank you for your patience.”

Haddow told Newsweek that damage from the demonstration was still being assessed.

“There were a few small fires that did not cause any damage and broken windows,” she said. Haddow added that the employees of South Sound 911 Records were evacuated after the windows of their building were broken.

She added that no arrests were made during the demonstration, but two people had been arrested in the period leading up to it.

Witnesses had reported seeing three people in a secure building in the 700 block of Commerce Street trying to access the roof on Sunday afternoon, police said.