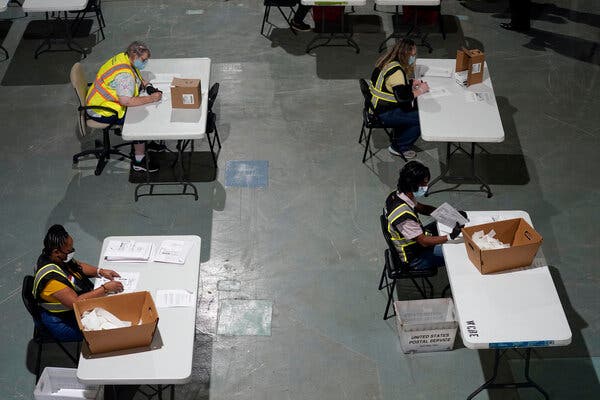 In the Pennsylvania case, the court refused a plea from Republicans in the state that it decide before Election Day whether election officials can continue receiving absentee ballots for three days after Nov. 3.

In the North Carolina case, the court let stand lower court rulings that allowed the state’s board of elections to extend the deadline to nine days after Election Day, up from the three days called for by the state legislature.

The court’s brief orders in the two cases were unsigned. The Pennsylvania order appeared to be unanimous, while the North Carolina one was issued over three noted dissents.

Justice Amy Coney Barrett, who joined the court on Tuesday, did not take part in either case. A court spokeswoman said Justice Barrett had not participated “because of the need for a prompt resolution” and “because she has not had time to fully review the parties’ filings.”

The Pennsylvania and North Carolina cases are the latest illustrations of the complications that Covid-19 has presented to officials preparing for next week’s election and facing a record-setting number of absentee and mail-in ballots cast by voters eager to avoid voting in person during a pandemic.

Democrats have consistently pushed for more lenient rules when it comes to mail-in ballots and how and when they are counted. Republicans have resisted such changes, with many of them arguing that the relaxed rules could open the process to abuse and fraud.

There were no noted dissents in the Pennsylvania case, though three justices said the court might return to it after Election Day. In the North Carolina case, the same three members of the court — Justices Clarence Thomas, Samuel A. Alito Jr. and Neil M. Gorsuch — said they would have granted requests from Republican lawmakers and the Trump campaign to block lower court rulings allowing the longer deadline.

The Pennsylvania case left open the possibility of later action by the court.

“I reluctantly conclude that there is simply not enough time at this late date to decide the question before the election,” Justice Alito wrote.

“Although the court denies the motion to expedite” the petition seeking review, he wrote, the petition “remains before us, and if it is granted, the case can then be decided under a shortened schedule.”

The court’s refusal to move more quickly came a little more than a week after it deadlocked, 4 to 4, on an emergency application in the case. The Pennsylvania Republican Party had asked the justices to temporarily block a ruling from the Pennsylvania Supreme Court that allowed election officials to count some mailed ballots received up to three days after Election Day.

The state court said the extra time was needed because of the coronavirus pandemic and delays in mail service.

State Republicans, apparently hoping that the arrival of Justice Barrett would alter the judicial calculus, returned to the Supreme Court on Friday asking it to hear an ordinary appeal from the state court’s ruling, which is not unusual, but to compress a process that usually takes months into a few days, which certainly is.

In his statement, Justice Alito criticized his court’s treatment of the case, which he said had “needlessly created conditions that could lead to serious postelection problems.”

“The Supreme Court of Pennsylvania has issued a decree that squarely alters an important statutory provision enacted by the Pennsylvania legislature pursuant to its authority under the Constitution of the United States to make rules governing the conduct of elections for federal office,” he wrote.

That echoed a concurring opinion issued on Monday by Justice Brett M. Kavanaugh in a voting case from Wisconsin. Justice Kavanaugh also said that state legislatures, rather than state courts, have the last word in setting state election procedures.

Writing on Wednesday, Justice Alito said he regretted that the election would be “conducted under a cloud.”

“The provisions of the federal Constitution conferring on state legislatures, not state courts, the authority to make rules governing federal elections would be meaningless,” he wrote, “if a state court could override the rules adopted by the legislature simply by claiming that a state constitutional provision gave the courts the authority to make whatever rules it thought appropriate for the conduct of a fair election.”

Earlier on Wednesday, Pennsylvania officials told the court that they had instructed county election officials to segregate ballots arriving after 8 p.m. on Election Day through 5 p.m. three days later. That could potentially allow a later ruling from the court to determine whether they were ultimately counted.

In its motion seeking expedited consideration of the case, lawyers for the Republican Party wrote that the court’s ordinary briefing schedules “would not allow the case to be considered and decided before the results of the general election must be finalized.”

The motion noted that four justices had already indicated where they stood when the court deadlocked on Oct. 19. Justices Thomas, Alito, Gorsuch and Kavanaugh said they would have granted a stay blocking the Pennsylvania Supreme Court’s decision. On the other side were Chief Justice John G. Roberts Jr. and the court’s three-member liberal wing: Justices Stephen G. Breyer, Sonia Sotomayor and Elena Kagan.

Neither side gave reasons, and the split suggested that Justice Barrett could play a decisive role if the court eventually heard the case.

Responding to the motion seeking expedited treatment of the Republicans’ appeal, the Pennsylvania Democratic Party called the request “rash and unseemly.”

“Even on the extraordinarily hurried schedule” proposed by the Republicans, the response said, “a ruling from this court could not realistically issue until the eve of the election.”

“By then,” it added, “it will be too late for many Pennsylvania voters who have relied on the existing rules to adjust to any change in the rules that this court might impose.”

The state court ordered a three-day extension for ballots clearly mailed on or before Election Day and for those with missing or illegible postmarks “unless a preponderance of the evidence demonstrates that it was mailed after Election Day.”

The U.S. Supreme Court has not hesitated to block orders from federal judges that sought to alter state rules for conducting elections. Rulings from state courts present more difficult questions because the Supreme Court generally defers to them in cases concerning interpretations of state law and the Constitution empowers state legislatures to set the times, places and manner of congressional elections.

In an earlier brief, Republicans argued that “the Constitution reserves a special role for state legislatures in federal elections,” one that cannot be overridden by state courts. The brief relied heavily on the Supreme Court’s decision in the cases culminating in Bush v. Gore, the 2000 ruling that handed the presidency to George W. Bush.

“By extending the deadline by judicial fiat and establishing a presumption of timeliness that will allow voters to cast or mail ballots after Election Day,” the brief said, “the Pennsylvania Supreme Court has impermissibly altered both the ‘time’ and ‘manner’ established by the General Assembly” for conducting elections.

In response, Josh Shapiro, Pennsylvania’s attorney general, a Democrat, said a provision of the State Constitution protecting “free and equal elections” allowed the Pennsylvania Supreme Court to extend the deadline.

The North Carolina case concerned a state law that allowed absentee ballots to be received up to three days after Election Day. But the state’s board of elections, drawing on its power to address natural disasters, had agreed to nine days as part of a settlement of a lawsuit in state court.

All five members of the board agreed to the settlement, including two Republicans who later resigned, saying they had been “gulled into providing their assent.”

Republican lawmakers, the Republican National Committee and the Trump campaign challenged the settlement in federal court, saying the board had exceeded its power. By a 12-to-3 vote, the United States Court of Appeals for the Fourth Circuit ruled against them. All three of President Trump’s appointees to the court voted with the majority.

“All ballots must still be mailed on or before Election Day,” Judge James A. Wynn Jr. wrote. “The change is simply an extension from three to nine days after Election Day for a timely ballot to be received and counted. That is all.”

“It takes no special genius to know what this insidious formula is producing,” they wrote. “Our country is now plagued by a proliferation of pre-election litigation that creates confusion and turmoil and that threatens to undermine public confidence in the federal courts, state agencies and the elections themselves.”

In the Supreme Court, the Trump campaign urged the justices to intercede.

“This case involves an extraordinary attempt by an unelected state board of elections to rewrite the unambiguous terms of a statute enacted in June by a bipartisan state legislature to set time, place, and manner requirements for absentee voting in response to the Covid-19 pandemic,” the brief said.

The board responded that it had the statutory authority to act. A state law gave it emergency powers to be used when elections are disrupted by natural disasters.

“In the past three years alone, the board has twice extended the absentee-ballot receipt deadline after hurricanes hit the state’s coast,” its brief said. “No one challenged those extensions.”

Justice Thomas said he would have granted the stay sought by the Republicans, but he gave no reasons.

Its actions, Justice Gorsuch wrote, “do damage to faith in the written Constitution as law, to the power of the people to oversee their own government, and to the authority of legislatures.”

“Such last-minute changes by largely unaccountable bodies, too,” he wrote, “invite confusion, risk altering election outcomes, and in the process threaten voter confidence in the results.”