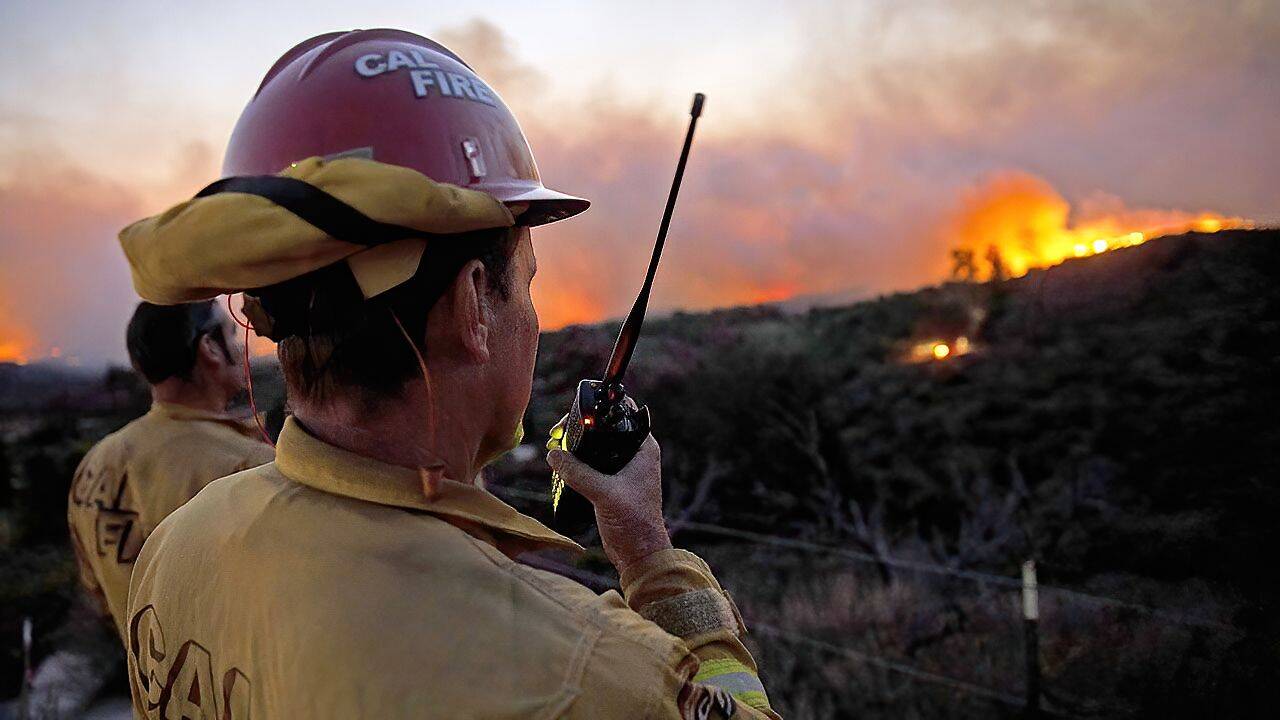 Power company Southern California Edison told state regulators that its equipment may have ignited one of a pair of fast-moving wildfires in Orange County, Calif., that have prompted evacuation orders for 80,000 people.

The Silverado Fire, which broke out early Monday, has consumed more than 11,000 acres of tinder-dry brush in the foothills above Irvine and other cities south of Los Angeles. The inferno had caused minimal property destruction as of midday Tuesday, but two firefighters were in critical condition after suffering burns.

A few miles to the north, the Blue Ridge Fire also broke out Monday and has blackened more than 10,000 acres and led to evacuation orders for the city of Yorba Linda. Both conflagrations were driven by Santa Ana winds gusting up to 80 miles an hour. In all, more than 16,000 homes valued at $14.1 billion were at risk from the twin fires, according to estimates by Realtor.com.

Irvine resident Alan Sung evacuated with this wife and 3-year-old daughter to stay with family 10 miles away in Laguna Hills. The 46 year-old grew up in the city but said this was the first time he had to evacuate because of a wildfire threat.

“Maybe going forward we need to have an emergency bag ready, because what if you don’t have the time,” Mr. Sung said. “It’s a valuable learning experience. I wouldn’t wish it on anybody, but I’m thankful that everyone is safe.”

Thick clouds of billowing smoke have obscured visibility in Orange County and sent air-quality readings into the unhealthy range. The noxious air and fires prompted closures for some area schools that recently resumed limited in-person instruction, including Chapman University.

The causes of the two fires were still under investigation. But Edison officials said in a filing Monday with the California Public Utilities Commission that the Silverado Fire may have been sparked by contact between a wire and a conductor line in overhead electrical facilities where the blaze originated.

Edison officials weren’t immediately available for comment. The utility, like its neighbor PG&E Corp. in Northern California, cut power in the past few days to lower the risk of electrified wires causing fires.

GET FOX BUSINESS ON THE GO BY CLICKING HERE

Edison in November 2019 agreed to pay $360 million to compensate about two dozen local governmental entities for damages and other costs related to a series of fires and resulting mudslides that hit the region in 2017 and 2018.

PG&E emerged from bankruptcy earlier this year after grappling with billions of dollars in wildfire-related liability costs. The company’s equipment sparked a series of destructive wildfires in 2017 and 2018 that collectively killed more than 100 people and burned more than 15,000 homes in Northern California.

More recently, PG&E told California regulators its equipment might have contributed to the 56,388-acre Zogg Fire that broke out Sept. 27 near Redding, Calif., killing four people and destroying 204 homes and other structures.

More than 4 million acres have been consumed by wildfires in California this year, including four of the five largest blazes in state history.