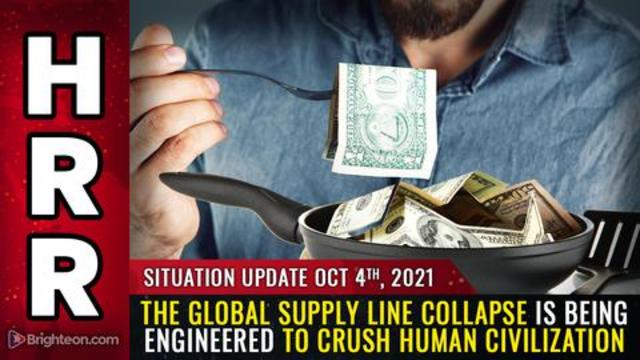 The data firm HIS Markit published the results of a new survey which found that production, delivery and distribution schedules continued to be disrupted throughout the month of August, all due to the government’s Wuhan coronavirus (Covid-19) restrictions.

Logistical troubles are plaguing many companies as they struggle to maintain inventory, not to mention a reliable workforce. It really has become a sellers’ market for the goods that many factories need to continue doing business, which is contributing to inflation.

In the euro zone, factory activity remains strong. However, final manufacturing in the Purchasing Managers’ Index (PMI) reportedly fell to 61.4 in August, a “fraction” below its earlier “flash” estimate of 61.5. In July, the Manufacturing PMI was 62.8.

“Despite the strong PMI figures, we think that lingering supply-side issues and related producer price pressures might take longer to resolve than previously expected, increasing the downside risk to our forecast,” announced Mateusz Urban from Oxford Economics.

According to the data, The Netherlands outperformed all other nations in terms of achieving the strongest improvements in manufacturing business conditions, despite its growth slowing to a five-month low.

Germany, Ireland, Austria and France also did fairly well, though not as good as The Netherlands.

Greece reportedly registered the highest reading in its Manufacturing PMI since April 2000, while Spain and Italy both reported similarly accelerated expansions that suggest modest improvements.

Great Britain also saw some output improvement in its manufacturing sector despite a previous six-month weakening.

In the United States, data is about to drop about conditions here. Chances are they will be modest at best, if not worse off. This is the situation in China, where factory activity contracted in August due to supply bottlenecks, Chinese Virus containment measures, and high prices for raw materials.

China’s Caixin / Markit Manufacturing PMI fell to 49.2 in August, down from 50.3 in July. It has officially breached the 50-mark, pointing to contraction rather than growth.

Japan, South Korea and Taiwan all saw manufacturing activity expand at a slower rate as well, suggesting that chip shortages and factory shutdowns could delay a sustained recovery from the pandemic-induced slump.

Canada saw its economy shrink last quarter, while Australia reported slower growth in its second quarter. Pretty much everyone around the world is still hobbling along because of all the Wuhan coronavirus (Covid-19) tyranny.

“The overriding issue was again a lack of components, however, with suppliers either unable to produce enough parts or are facing a lack of shipping capacity to meet logistics demand,” announced Chris Williamson, the chief business economist at HIS Markit, about economic activity in the euro zone.

“These supply issues were the primary cause of a shortfall of manufacturing production relative to orders of a magnitude not previously recorded by the survey, surpassing the 24-year record deficit seen in July.”

The food supply is also struggling, resulting in high food prices and supply shortages for some products.

To help boost output, companies are hiring as many people as they can to their workforce. However, there seems to be more demand for workers than there is supply, which is placing further strain on the system.

“This is how communism works,” wrote one commenter at The Epoch Times. “Things are most definitely going to get a lot worse and this is by design.”

To keep up with the latest news about the plandemic-induced global economic meltdown, be sure to check out Collapse.news.