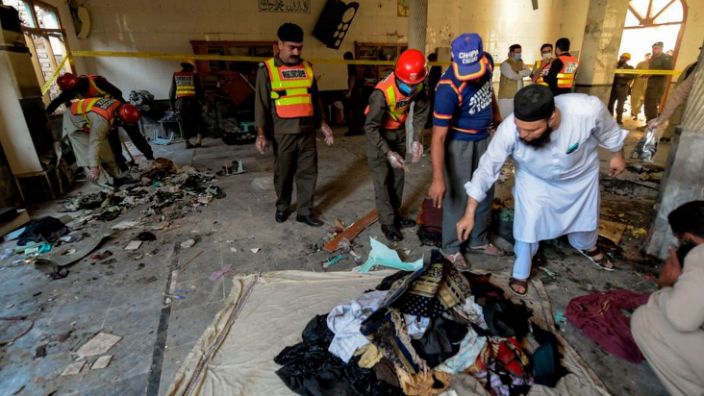 At least seven people have been killed and more than 50 injured by a bomb attack on a religious school in the Pakistani city of Peshawar, police say.

Hospital officials say those killed were young men, aged between 20 and 30. Dozens of others were injured, including four under the age of 13.

The motive for the attack on a Koran study class is unclear. Hundreds of students were present at the seminary.

No group has said it carried out the attack, which is being investigated.

Earlier reports suggested four of the dead were children, but this has since been retracted.

The northern city of Peshawar, close to the Afghan border, has seen some of the worst of the violence during the Taliban insurgency in recent years.

Six years ago, gunmen stormed a military school in the city leaving more than 150 dead, most of them children.

However, an army crackdown in the years which followed resulted in the number of attacks being greatly reduced inside Pakistan.

What happened at the school?

About 60 people are understood to have been in the class at the religious school, known as a madrassa.

An eyewitness told the police he saw a man enter the building with a bag of explosives shortly before the blast.

Images from inside the room show extensive damage.

Hospital officials told Reuters news agency that they had received dozens of injured, many with burns.

The AFP news agency quoted police saying that two teachers were among the injured.

Pakistan’s Prime Minister Imran Khan has expressed “regret over the loss of precious lives”, strongly condemning the blast and promising to bring those behind it to justice.

This attack, which follows a bombing in a neighbourhood in Quetta city on Sunday, is reminiscent of the era of widespread militant violence that hit Pakistan in the mid-2000s.

It is the first “soft” target hit by suspected militants in Peshawar since the 2014 attack on the Army Public School, which shocked the world.

That attack prompted the Pakistani army to launch an operation to clear militant sanctuaries along the Pakistan-Afghan border. In November 2016, the army claimed the areas had been cleared of militants.

The latest incidents come amid reports suggesting the Taliban have been regrouping in areas which had been cleared. Various attacks have been reported, mainly targeting members of the PTM, a Pashtun nationalist movement that has accused the military of protecting militants as well as widespread human rights abuses.

Some analysts fear that the current militant regrouping may be part of a plan not only to counter the PTM and a new opposition alliance aimed at unseating Imran Khan, but also to influence the political process in Afghanistan at a time when American forces are set to pull out from the region.

Islamist militants have long been seen by analysts as proxies of the Pakistani security establishment, working to further its strategic aims in the region.