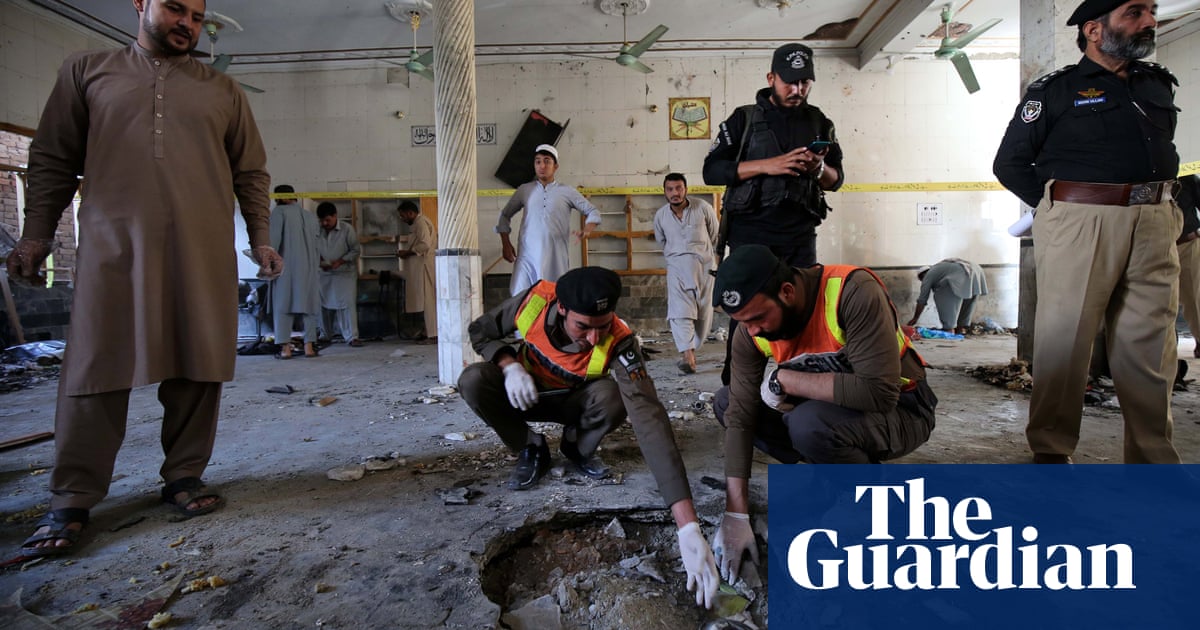 An explosion at a religious seminary in Pakistan’s northern city of Peshawar has killed at least eight people and injured 110 others.

The deadly blast took place at about 8.30am at the Jamia Zuberia religious school in Dir Colony, where about 500 students were gathered to hear a lecture by influential cleric Rahimullah Haqqani. Most of them were between 20 and 30 years old and from the Khyber Pakthunkwa and Balochistan regions of Pakistan, as well as some from Afghanistan.

A police superintendent, Waqar Azeem Kharal, said the explosion had been caused by high-quality explosives brought into the lecture hall in a bag. Kharal said that ball bearings were also used in the explosives. “It shows the attackers planned for mass casualties,” he said.

Police superintendent Rajab Ali of the counter terrorism department confirmed it was being treated as an act of terrorism. “It is too early to say who is behind the attack but from the way it was planned and carried out it is definitely a terrorist attack,” he said.

At least four children were believed to be among the dead and at least two teachers had been wounded, a police official said.

Mohammed Kashif Nadeem, a 26-year old-student, was in the lecture hall when the blast happened. He said the explosion had injured his teacher and many of the students sitting in the front row, including his friend Atif Saeed, 25, who had lost his hearing from the blast. Nadeem said he had been saved as he had arrived late and was sitting at the back of the room.

“We were having our Qu’ran classes when there was a huge blast by the minbar [pulpit] where our teacher was giving the lecture,” Nadeem said. “There was a boom so loud it broke our eardrums and students sitting on the front rows started screaming as they were burnt in the blast.

“It seemed like someone had placed explosives right next to where out teacher stood to teach.”

Nadeem said after the blast there was confusion and the students began running. “As soon as the horrible blast hit our teacher and friends, I found myself running to the gate. We all were screaming and did not know what was happening but everyone was trying to escape from the only gate of the seminary.

No group immediately claimed responsibility for the attack.

Prime Minister Imran Khan said he was “deeply saddened by the terrorist attack.”

“My condolences go to the victims’ families and prayers for early recovery of the injured. I want to assure my nation we will ensure the terrorists responsible for this cowardly barbaric attack are brought to justice ASAP,” wrote Khan on Twitter.

The dead and injured, many with severe burns, were taken to the nearby Lady Reading hospital, which was placed on red alert.

A spokesperson for the hospital, Mohammad Asim, said: “We have received seven dead bodies. Eighty-three are injured and, out of that, five have been shifted to Hayatabad burn centre as they were severely burned.

“In the beginning we had to deal with the aggression of people who lost their family members in the blast but now we are in a better situation.”

Dr Siraj Muhammad, a medical superintendent at Naseerullah Khan Babar Memorial hospital in Peshawar, said it was treating 27 people injured in the attack.

Peshawar is the provincial capital of Khyber Pakhtunkhwa, bordering Afghanistan. The province has been the scene of several militant attacks in recent years, but sectarian violence has also killed or wounded people at mosques or seminaries across Pakistan. Some of the attacks have been claimed by the Pakistani Taliban.

The latest incident comes two days after a bombing in the south-western city of Quetta killed three people.