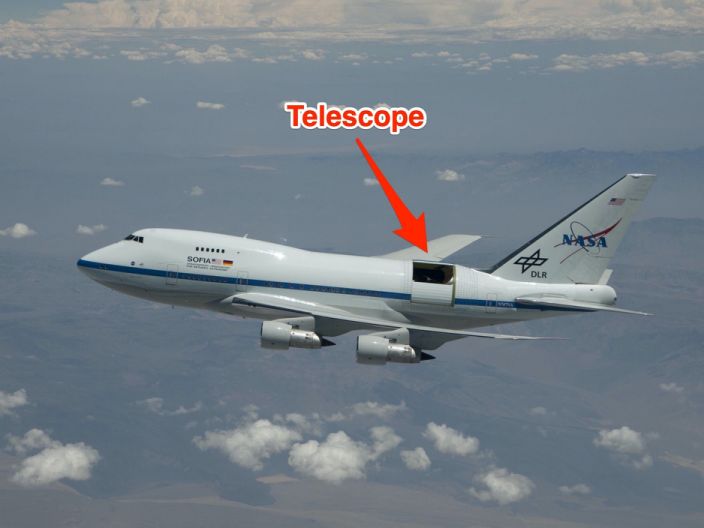 NASA just discovered molecular water on the moon, and humans didn’t even need to be there to find it.

Scientists on Monday announced the finding of frozen H20 on the moon with data acquired from NASA’s flying observatory, a heavily-modified Boeing 747SP. The Jumbo Jet comes equipped with a 2.7-meter far-infrared telescope capable of peering deep into space and seeing with infrared what cannot be seen with visible light.

The Stratospheric Observatory for Infrared Astronomy, or SOFIA for short, can be found flying around in the darkest hours of the night with its telescope pointed to the stars. Soaring as high as 45,000 feet on some missions, the telescope enjoys fewer obstructions than its counterparts on the ground.

The discovery is a major milestone for NASA’s Artemis mission that will see humans return to the moon by 2024 and eventually Mars. Previously untouched planets in the final frontier will soon be welcoming their first humans if the program is successful.

The Boeing 747 is also proving to be a veritable jack of all trades and master of many. While airlines are finding they no longer have a purpose for the jet, it has found a second life in the cargo realm, as the world’s largest private jet, and now, as a scientist.

Take a closer look at SOFIA, the Boeing 747 that just found water on the moon.

Meet SOFIA, short for Stratospheric Observatory for Infrared Astronomy, one of many aircraft that NASA employs for research missions.

While it may look like a normal airliner on the outside, this Boeing 747SP, or 747 Special Performance, hides a secret in the form of a 2.7-meter reflecting far-infrared telescope.

It’s the largest aerial observatory in the world allowing NASA to get unobstructed views of the final frontier from high above Earth’s surface.

While the scientific community has similar telescopes on the ground across the globe, SOFIA can soar above any potential obstructions in our atmosphere such as water vapor, which emits infrared radiation.

A typical altitude for the jet is 45,000 feet, high in the troposphere above even most commercial jet traffic.

The 10-hour science flights are also flown at night for that reason, as water vapor is lower than during the day. The longer the night, the better.

The mobile telescope can observe happenings over areas where placing a ground-based telescope wouldn’t be possible such as oceans or harsh terrain.

Once airborne, this door at the back of the fuselage opens for an unobstructed line of sight.

This isn’t a quarter-operated telescope with someone peering through at the other end. Rather, this telescope sees in infrared wavelengths to see what can’t be observed with visible light.

Infrared can even see through obscurations, such as dust clouds.

Another benefit of the telescope is its ability to be updated with the latest technology more often than space-based telescopes.

As SOFIA returns to the ground after every 10-hour flight, it can constantly be updated. space-based telescopes, however, cannot.

The hundreds of seats that once filled this plane have been replaced with millions of dollars worth of technology aiding in space exploration.

Though based in California between the Armstrong Flight Research Center and Ames Research Center, this Boeing 747SP’s subscribes to the “have plane, will travel” mantra.

Deployments often see the aircraft and its telescope venture to the Southern Hemisphere during the change of the seasons to take advantage of the longer nights.

While the aircraft itself is incredibly unique, the 747SP also has a fascinating history.

The Boeing 747SP was first requested by Pan American World Airways for longer-range flights, greater than current 747 models at the time.

This Boeing 747, which wears the registration number N747NA, was first acquired by Pan Am and then United Airlines before heading to NASA in 1997. Here’s what it looked like in United’s “Battleship Gray” livery before being painted in NASA colors.

This plane was built in 1977 and is now the largest flying telescope ever to be used by NASA.

Its acquisition was just the start of 13 years of installing the equipment and flight testing.

And of course, a new cockpit was fashioned for the jet.

Both an American and German flag flies on the aircraft as NASA and the German Aerospace Center jointly operate the plane.

The Boeing 747 isn’t the first aircraft to be used as an aerial telescope platform as the program dates back to 1965.

Aircraft ranging from Learjets to military transport aircraft were used before the current model was acquired.

In the decade that it’s been flying, over 100 research flights have been launched.

This is arguably the aircraft’s most consequential discovery to date.

NASA expects to keep the plane flying for at least 20 years from its launch.

If humans do eventually go back to the moon, a Boeing 747 will have helped get us there.