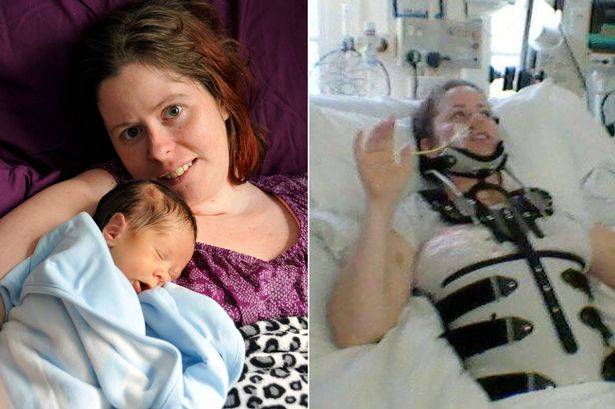 A woman who was in a terrifying car crash woke up from a coma to discover she was pregnant.

Gemma Holmes, 33, was involved in a collision on her way to work when she was just four weeks pregnant, and put in an induced coma.

Doctors told her worried parents she had a small chance of pulling through and then broke the news that she was also expecting a baby.

Gemma suffered horrific injuries including a broken back – and she lost all memory of the previous three years of her life- including the identity of the dad of her unborn child.

When the former carer came around she was stunned when medics revealed to her that she was 11 weeks pregnant.

Gemma defied the odds and gave birth to her healthy baby boy, Rueben, now seven, on May 2, 2013.

She was told she wouldn’t be able to walk again, but defied doctors and learned to take her first steps alongside her little boy.

She told the weekly podcast: “I woke up to be told: ‘You’re in hospital, you’ve had a really bad accident, you’ve got brain damage, a punctured lung, you’ve broken too many bones and you’ll never walk again.’

“To wake up to be told ‘you’ve just been through all of this, died and everything but you’re still pregnant’ it’s like: ‘Oh my god, how does that happen?’

“They said to me you’ve got a week to decide if you want to keep the baby because we can’t do anything after 12 weeks.

“It was just instant – he’s here for a good reason.

“I was excited. I couldn’t wait to meet him. He kicked me loads letting me know he was in there.”

Gemma was in an on-off relationship with the father of her son when she crashed her moped into the back of a parked car while driving to work in September 2013.

She didn’t know she was pregnant at the time and was rushed to Frenchay Hospital in Bristol, fighting for her life.

Doctors told her mum Julie Brown, 59, she was pregnant, and the family waited for her to wake up.

They broke the news to her and she had to wait until she had given birth to Rueben, until she could have major surgery on her back.

But after being in a wheelchair for months after the accident, Gemma gave birth to her baby boy and she learnt to walk at the same time as he took his first steps.

Speaking to the podcast, which helps people share their real stories, Gemma said: “The doctors said I hadn’t got much chance of making it, but I pulled through and I proved all those doctors wrong.

“My mum’s always brought up to think if you think negative, negative is going to happen. If you think positive, positive will happen.

“Some days I am in so much pain I really don’t want to get out of bed and I don’t, but other days I’ll go to the gym for a good workout.

“But for me where I am today is just amazing.”

Gemma is smitten with her son, Rueben. She added: “I just look at him and he’s just so lush, it’s like meant to be, wasn’t it?

“It was so amazing seeing him.

“To me everything happens for a reason. I really believe in that so I just take each day as it comes because everyday is so different for me.

“I just feel so lucky to have my little amazing boy.”