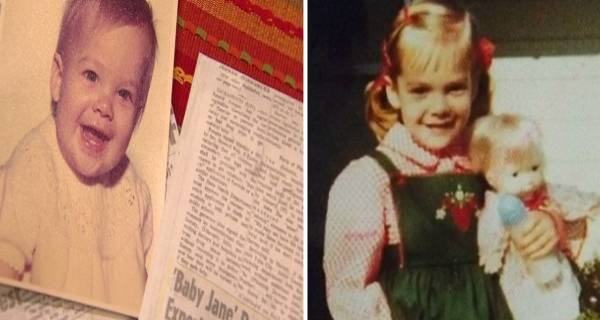 YUBA CITY (CBS13) — A woman who was abandoned as a newborn and grew up never knowing her biological parents has found her family after more than 30 years.

Jen Chervin knows that telling her story may reveal a secret that has been kept for decades, but she says she has an important story to tell and wants to be an example for others searching for family.

“I learned that I was found in the early morning hours of Dec. 18,” she said. “I was left on a sidewalk on the north entrance of Fremont Hospital in Yuba City.”

It was a story that made front-page news—a baby abandoned on the steps of a hospital.

“I was wrapped in two blankets and some nurses who were doing their rounds heard me crying. and that’s when they found me,” she said.

Investigators at the time searched for answers in her case, but there was nothing. Chervin, now 43, says she was adopted, has wonderful parents, and happy life.

She always knew she was adopted, but when she was 20 she learned the full story and went searching for answers. She found nothing. A year and a half ago, she turned to social media and connected with a woman who would give her a big clue to finding her biological family history.

A year and a half ago, she sent her samples to two DNA companies.

“I had hundreds of DNA cousins, hundreds, and I’m looking at this page and its people I’m related to and that was surreal to me,” she said.

One of those cousins said he wanted to help.

“He took all of these cousins and he started building family trees,” she said.

Soon, her tree began to take shape. She reached out to more relatives willing to go through DNA testing.

“Finally, one gentleman did a test and he came out like my uncle,” she said.

He agreed to be tested and so did his brothers. Finally, she found her match and made a difficult call.

“He was shocked and tongue-tied,” she said.

Then she learned the details.

“They’re still married to the same individuals they were married to at the time, so I’m a product of an affair,” she said.

After more DNA tracking, she found her biological mom and spoke to her for the first time.

“All the signs lead to you, and she said to me I don’t know what you’re talking about,” she said.

She denied it a second time, then the conversation changed.

“That’s when she broke down in tears and said she was so sorry and she asked for forgiveness,” she said.

She found out she was conceived when her mother’s husband was off fighting in Vietnam.

“She returned to North Carolina to stay with family and you know things happened,” she said.

Her mother returned to the Yuba-Sutter area where she gave birth scared. She abandoned her baby daughter at the local hospital. She says her mother is happy she found her but warns she must still stay a secret.

“I know she was shocked that I found her; one of the first things she said was, ‘You can’t be a part of my family,’ and she said it panicked and I said, ‘I know, it’s OK.’”

She speaks secretly to her biological mom and dad on a regular basis and says she has no regrets about her search and is grateful for the answers. Still, she yearns to meet her mom face-to-face and hopes that day will come.

“I just want to see her face, and I want to give her a hug,” she said.