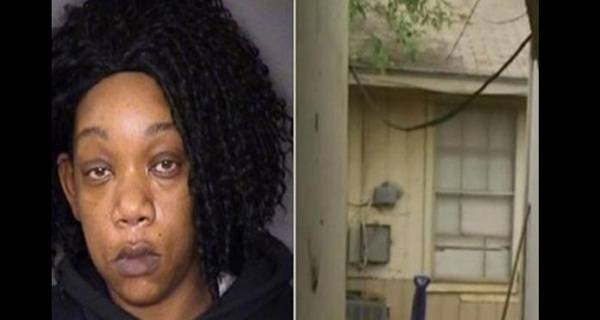 The woman you see pictured here is one of three parents who chained two young children outside a house in San Antonio, Texas.

Three parents were arrested when a neighbor called the authorities about a crying child and this is when the police found the two children under 5 years of age tied in the backyard.

The children had many scars, and there was evidence that they had been beaten with a switch.

One of the woman arrested was the mother to six of the children named Porucha Phillips – and she was pregnant for the seventh time!

As for the children tied outside the house, authorities were heartbroken to see one hypothermic little girl with a broken arm tied with a leash to the garage door.

Her brother was tied to the ground with a chain used to tie up dogs – he had been left outside during a rainstorm.

The two children had hundreds (not an exaggeration) of wounds of which some were old while others were more recent.

Apart from the two children tied outside, Phillips’ six children were found inside the house.

The children found inside the house ranged in age from 10 months to 10 years, but they did not show any signs of physical abuse.

Despite that the authorities are trying to assess if they suffered mental anguish from having to live in the house.

Cheryl Reed, the mother of the two children who were tied outside the house, faces two charges of injury to a child.

Seems like a light charge for the injuries those children suffered.

Together with Reed and Phillips, a man called Deandre Dorch was also arrested.

Dorch is the biological father to some of the kids.

I hope they all rot in jail for a long time.