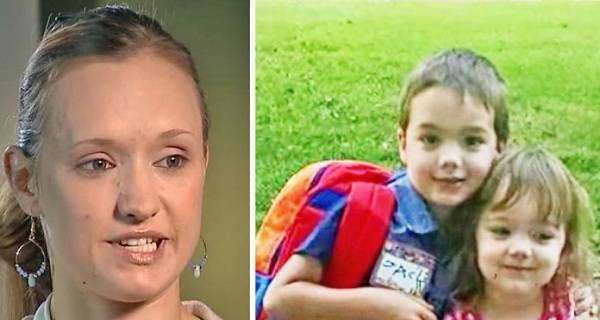 A mother from Connecticut was left shock and mortified over a simple choice she made.

When a delivery person rang her doorbell, Patty Levreault didn’t answer the door.

She figured the person would simply drop off the package at her porch so she could go back for it later.

Instead, the police were at her house to investigate if they have enough proof to send her to jail for allegedly abandoning her kids.

Levreault told ABC News that the reason why she didn’t open her front door for the delivery person was that she was dressed inappropriately.

The mom was still in her pajamas as she was tidying up the house and watching over her two young children.

Her kids were quietly watching television when the delivery person showed up.

Perhaps that person saw the children from the door or window and figured they didn’t have adult supervision because no one came up to see who rang the doorbell.

So, he called the cops.

Minutes later officers were at her door to check up on the children.

Levreault said that she was mortified of the idea that her kids would be taken away from her simply because she didn’t come to the door right away to pick up her deliveries.

It made her upset that someone would be quick to make conclusions and call the police on her.

She was feeling embarrassed to face the delivery man but now she’s terrified and traumatized.

Moms and dads are being judged and castigated for supposedly endangering their kids when people don’t actually know the whole story or the bigger picture.

Calls and reports of child abuse have been increasing in the last few years.

According to Child Protective Services (CPS), however, many of these calls don’t have merit simply because the parents allowed their children to play in an unfenced front yard or let their kids walk to school by themselves.

It’s more about making the judgemental person feel good about themselves by pointing out the flaws in others.

It’s not just Levreault who has been shamed and judged.

Celebrity and “Deadpool” star Ryan Reynolds was also shamed when he posted a photo of himself wearing a baby carrier with his daughter.

Instead of commending the actor for doing his fatherly duties, he was criticized for wearing the baby carrier the wrong way.

“Clueless” star Alicia Silverstone caused outrage when she shared a video of how she feeds her baby.

She apparently pre-chews the food so that her son could swallow it properly but the public thought this was unhealthy and unsanitary.

Sportsman David Beckham was also parent-shamed for kissing his 7-year-old daughter on the lips.

When Harper was 4, her dad was also criticized for allowing her to still use a pacifier at the age.