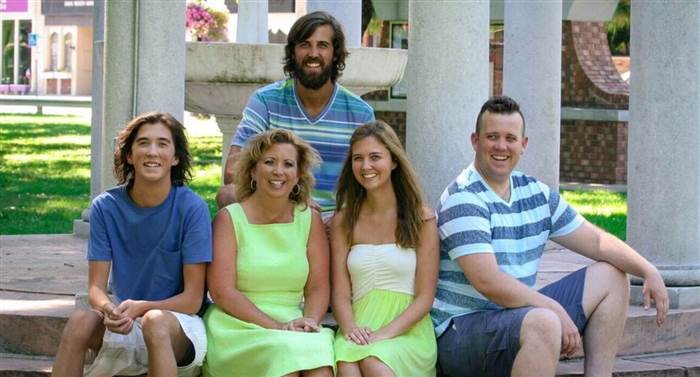 The season of Thanksgiving is a blessed one. It is a holiday where families come together and join in celebrations. Everywhere there is the sound of laughter and joy and bonding. Everyone comes to sit together for dinner and hold hands to say thanks for the blessing of being with one another.

Thanksgiving does come with responsibilities though. It is no easy task to get the house organized and cleaned from top to bottom before everyone comes over. This is probably why one mother refused to spend her energy cleaning the house repeatedly.

Michele Keylor is from Ohio and is a mother to four lovely children. The family decided to celebrate Thanksgiving in a big way and happened to invite close to thirty people to dinner at their home in Ohio. Funnily enough, Michele hung up a no entry board on the doors of one of her rooms. The living room, to be more precise. The reason being that she absolutely found no point in spending all of her energy in cleaning over and over again. Something that is mandatory when you have four children in the house.

Michele put some serious effort into cleaning up her living room right before Thanksgiving. She cleaned out the carpets, scrubbed out stains, polished the furniture, and organized the living room into a perfect space to hold Thanksgiving. Its no wonder then that she closed the door and taped a “closed until Thanksgiving” sign on the door. The hilarious mom did allow her family members permission to “sit” in the living room provided they were showered, wearing clean laundry, and were clean and odor free from top to bottom. They were told that they would not be allowed to take food and drinks into the living room. She signed off the amusing note by thanking her family members as “mom, payer of the bills, chauffeur, queen of the castle, and person ruining your life”. 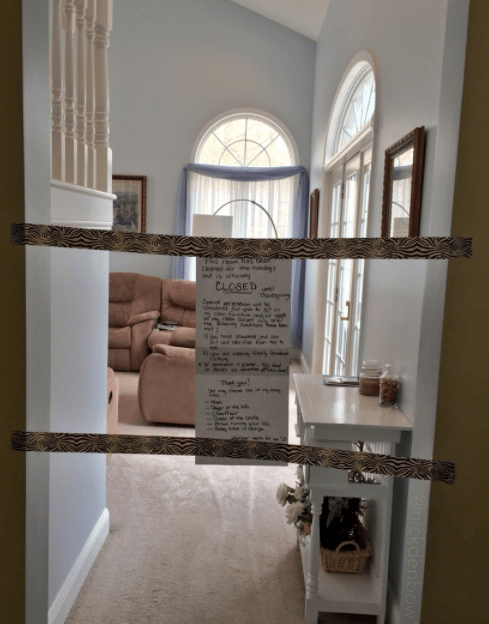 Michele has four kids ranging from age 17 to age 27. Two of her kids live away from them while two of them live with her. Nick Denbow, her 17 year old son took a picture of the note and tweeted it out, questioning the possibility of this actually happening. Much to the amusement of Michele and her family, the image was retweeted several times and received a large number of likes. Her daughter was not very amused and called it a very stupid thing to be famous for. She talked about the daily struggles most parents face in keeping the household spick and span. The cleaning never seems to be over. It just starts over and over again like an endless cycle.
Michel’s kids did not really think that their mother was actually being serious and found the whole incident quite funny. Michele, like any other mom tries to cook, clean, and finish off other tasks as much as she can so that they can all have a good time. She made the note just to avoid having to go to the trouble of cleaning a space which she already cleaned with so much effort over and over again. Understandable. Her son commented that his mom as truly justified in shutting down the living room as it had been quite messy.

Parenting is no easy task and a times it’s quite easy to come off as a villain for wanting things to be done a certain way. Incidents like this remind us that we can be serious and amusing at the same time. It shows the constant battle that parents go through everyday to keep everything organized and done in the best way possible. Michele found that she had no other option other than to close the living room if she wanted to save up her energy from more cleaning. It is something which many mothers can highly relate to. Michele’s children were teenagers and young adults. But the situation at home was apparently no different to having toddlers and infants at home. After all, kids are always kids when their parents are around. Amusingly enough so are parents. Despite having a 27 year old, Michelle was forced to hang up the sign. The good natured family simply laughed at the hilarity of it all. 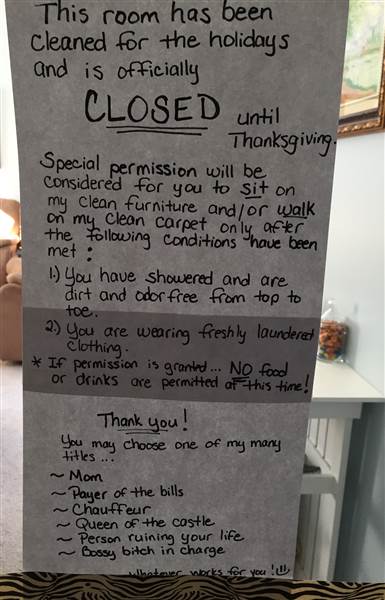 Who can relate to this?! Share this hilarious story to make your friends smile this Thanksgiving!