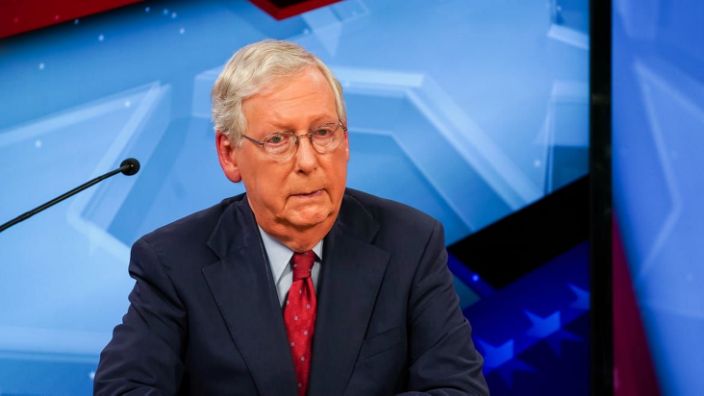 The group is clearly designed to peel off conservative votes from McConnell, who faces a challenge from Democrat Amy McGrath. Federal Election Commission records show that True Kentucky Patriots is affiliated with one of the Senate race’s largest independent spenders, a pro-McGrath group called the Ditch Fund.

True Kentucky Patriots also shares a treasurer with the Ditch Fund, and both groups have paid a Democratic firm called Beacon Media to produce and place their respective digital ads.

It’s not uncommon for political operatives to attempt to boost third party candidates that they hope will act as spoilers and split an opposing ideological coalition’s votes to the detriment of one major party candidate or the other. But it’s less common for groups doing so to disclose those efforts in publicly available campaign finance filings.

True Kentucky Patriots hasn’t been around long enough to reveal any of its donors, and it won’t have to do so until nearly three weeks after election day. But pro-McGrath forces have already attempted to promote Barron’s candidacy through other means. Another anti-McConnell super PAC, Fire Mitch Save America PAC, has sent mailers promoting Barron’s Senate bid.

FEC filings also show that Democrats have sought to boost Barron directly. At least five of Barron’s donors have also given to McGrath’s campaign. One of them, a New York-based Microsoft employee, even donated to both McGrath and Barron on the same day.

Polling in the Kentucky Senate contest has shown McConnell with a consistent lead, though his margin has varied from as little as five points to as much as twelve. The most recent poll of the race has McConnell with a nine-point lead over McGrath, and just four percent saying they support Barron’s candidacy, meaning the Libertarian likely will not draw enough votes to tilt the election. The race has nonetheless drawn massive investments from both parties. McConnell and McGrath have together spent nearly $115 million, with outside groups dropping another $26 million, according to the Center for Responsive Politics.

Kentucky isn’t the only state where Democrats have attempted to boost a third party spoiler in a tight Senate contest. In South Carolina, Democrat Jaime Harrison’s campaign has run ads ostensibly attacking an obscure Constitution Party candidate by calling him too conservative for the state. It appears to be an effort to encourage support for the more right-wing contender among the state’s more conservative voters—to the detriment of Republican Sen. Lindsey Graham.

But the most famous would-be spoiler candidate of the 2020 election cycle is Kanye West. A number of Republican operatives have lined up behind his dead-end presidential campaign in an effort to draw votes from Democratic nominee Joe Biden in some key battleground states.

Read more at The Daily Beast.

Get our top stories in your inbox every day. Sign up now!

Daily Beast Membership: Beast Inside goes deeper on the stories that matter to you. Learn more.