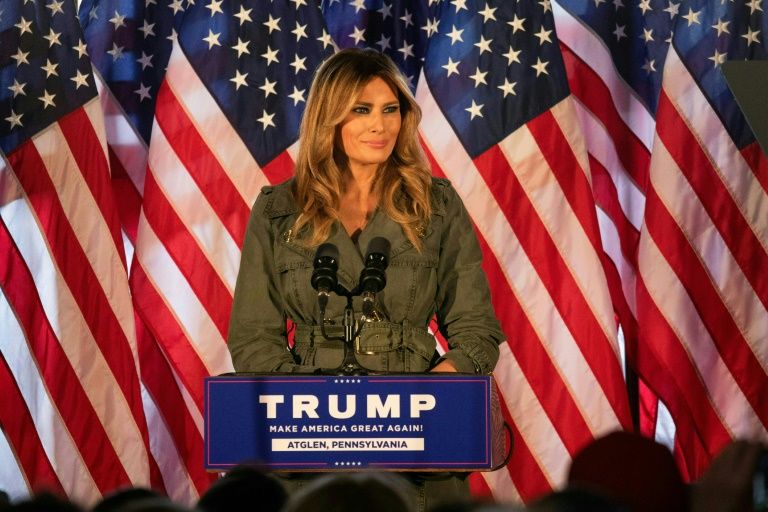 First Lady Melania Trump on Tuesday hit the campaign trail for her president husband for the first time on her own this year, praising him as a “fighter” and offering support to pandemic victims.

Trump, 50, has been only a rare presence at her husband’s campaign events, but won praise for her speech at the Republican Party’s nominating convention in August.

“Donald is a fighter. He loves this country and he fights for you every single day,” she told supporters of the president in Pennsylvania, a key battleground in his duel with Joe Biden.

Her plans to hit the trail with her husband last week were thwarted due to a “lingering cough” from her battle with the coronavirus, which struck the first couple and son Barron.

“Thank you for all the love and support you gave us when our family was diagnosed with Covid-19,” she said Tuesday. “We are feeling so much better now.”

She offered compassion to families of the more than 225,000 Americans who have succumbed to Covid so far this year.

“My family’s thoughts and prayers are with all of you through this difficult time,” Trump added. “We will triumph over this virus.”

In her speech, she offered a few comments about her husband’s rabid Twitter use.

Her “Be Best” campaign — which champions “uplifting, positive and respectful online interactions,” according to the White House website — has often faced criticism given the president’s own strident online persona.

“For the first time in history, the citizens of this country get to hear directly and instantly from their president every single day through social media,” she said.

“I do not always agree with the way he says things,” she added, to some laughter from the crowd.

“But it is important to him that he speaks directly to the people he serves.”