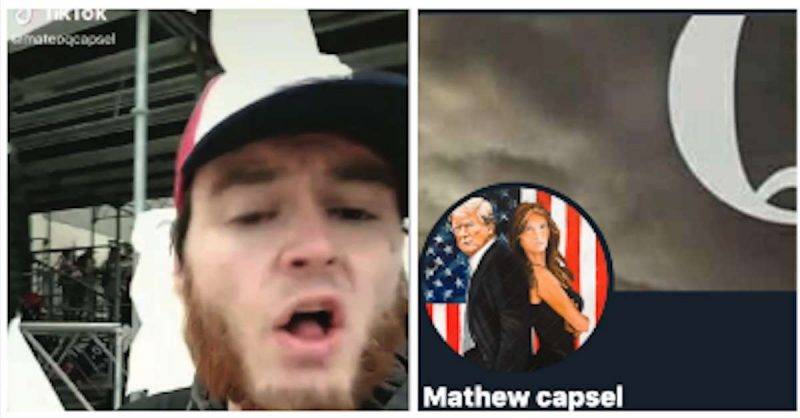 The FBI arrested a man in Illinois on Tuesday whom they say was recorded in a TikTok video attacking National Guardsmen as they were “attempting to hold the line with riot shields” on Jan. 6 at the U.S. Capitol. The FBI said that two witnesses, over the span of five days, came forward and identified Mathew Capsel (born in 1993) as a Capitol rioter, submitting screenshots of his “Mateo Q Capsel” Facebook profile.

“Witness 1 reported that they were a former neighbor of CAPSEL and that CAPSEL was ‘known to be violent,’” the FBI affidavit said. “On or about January 13, 2020, the FBI received a tip from Witness 2 who submitted screenshots of Facebook posts by ‘Mateo Q Capsel’ stating that they are friends on social media with CAPSEL and that CAPSEL ‘was at Capitol building when the protesters and rioters got on the building before entering’ and had video of this on his Facebook page.”

The FBI Special Agent on Capsel’s case said that, based on the foregoing, the defendant was the @mateoqcapsel on TikTok who attacked National Guardsmen. The feds cited Capsel’s “distinctive tattoos on his face and neck.”

A Twitter profile of an Illinois man with the name “Mathew Capsel” clearly indicates that “Mateo Q” is a reference to QAnon. Law&Crime obtained screenshots of the account.

On that Twitter timeline is a TikTok video with a slightly different handle—this one is @capselq—but it shows what appears to be the same man with a face tattoo. Notice the blatant references to QAnon:

The FBI affidavit included an image of Capsel’s driver’s license photo, which the FBI said appears to show the same face tattoo.

Capsel has been hit with numerous and serious federal charges:

Knowingly entering or remaining in any restricted building or grounds without lawful authority; and knowingly engages in any physical violence against any person or property in any restricted building or grounds; or attempts or conspires to do so; Forcibly assaulted, resisted, opposed, impeded, intimidated, or interfered with any officer or employee of the United States or of any agency in any branch of the United States Government (including any member of the uniformed services) while engaged in or on account of the performance of official duties; Committed or attempted to commit any act to obstruct, impede, or interfere with law enforcement officer lawfully engaged in the lawful performance of his official duties incident to and during the commission of a civil disorder which in any way or degree obstructs, delays, or adversely affects commerce or the movement of any article or commodity in commerce or the conduct or performance of any federally protected function.