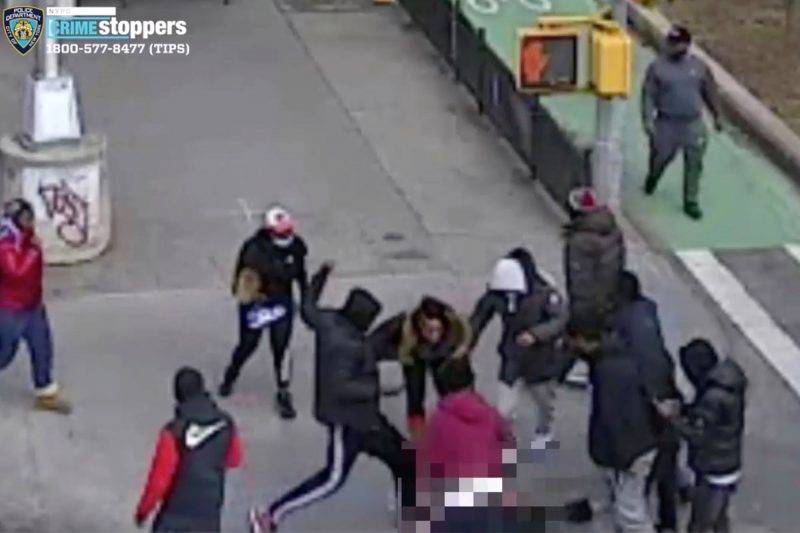 A Brooklyn man who was stripped naked and viciously beaten by about a dozen people after getting off a bus from Atlanta was a gangbanger who was targeted in the attack, police sources told The Post.

The 26-year-old beating victim was pounded after getting off the bus near Canal Street in Manhattan around 11:30 a.m. Friday in a brutal caught-on-video beatdown.

The victim, who has an extensive criminal history, was slashed in the torso, head, and hand in the attack but escaped serious injury.

It appeared the crowd had been awaiting the man’s arrival from Atlanta. His identity is being withheld by The Post because he is the victim of a crime.

But police sources said he is affiliated with the notorious Mac Baller Brims gang, once dubbed one of the Big Apple’s most dangerous gangs.

Records show he has 43 arrests on his record — 17 of them felony busts — and served a three-year sentence at the upstate Fishkill Correctional Facility on a robbery conviction before his release in 2017.

As recently as Jan. 5, he was shot in the leg outside his home in Brownsville, the sources said Monday.

On Friday, a mob that included both men and women waited for hours for the victim to get off the bus — then beat him and chased him from the scene, the sources said.

Police said his attackers also stripped him of his cellphone, pants, underwear and shoes before he was able to seek help and get away.

He was treated at a local hospital.

Police said the incident is still under investigation and none of the attackers have been arrested.