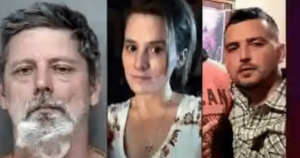 On Oct 14, the Battle Creek Police announced that a search had begun, identified as Joseph Soule, 34, and Jaclyn Lepird, 31, who were both last seen on October 7.

On Oct 15, the landlord then confessed to murdering the couple and hiding their bodies. The authorities said that they received a tip that the man had confessed to killing them. He is a 53 year old man called Chad Allan Reed.

They say that the man and the couple had an altercation on October 7. Then Reed told the officers that Joseph had pulled a knife on him and he shot him in self defence. The girl tried to run away but he shot her also, then beat her up and then finally strangled her to death in the backyard.

Battle Creek Police Detective Sergeant Joel Case said that “He did also tell us that he ended up wrapping them in plastic and put them in the back of his pickup truck. Sounds like they were actually left there at 203 Post Avenue for maybe a few days.

Then as family members and friends started coming over and checking on them or looking for them, he decided that he needed to move the bodies, and he ended up moving his truck, that still had the bodies in it, over to another house in the Post-Addition where he found an abandoned garage. He parked the truck with the bodies inside of it and closed it off.”

The police also said that the family and friends said that the couple and the landlord had issues going on related to money and noise. The man has been charged with two counts of open murder, possession of a firearm by a felon and three counts of use of a firearm in the commission of a felony. He will face life in prison without possibility of parole if he gets convicted.