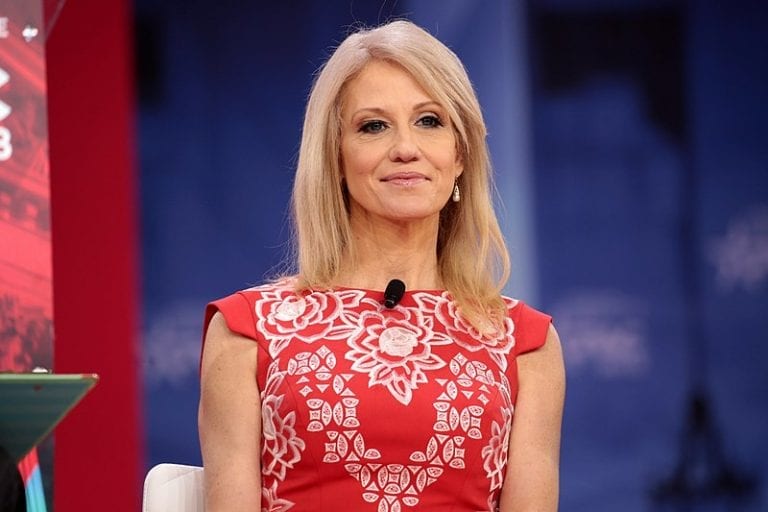 And boy, oh, boy, did it backfire.

She was appointed by President Trump and is still in that position.

You know who else is in that position?

And despite his disastrous decision in Afghanistan, Biden is asking these two Trump appointees to quit.

Well, Kellyanne Conways isn’t having it!

She wrote a letter to Joe Biden that’s now public.

Our favorite part is the last sentence:

I’m not resigning, but you should.

Read the entire letter below: 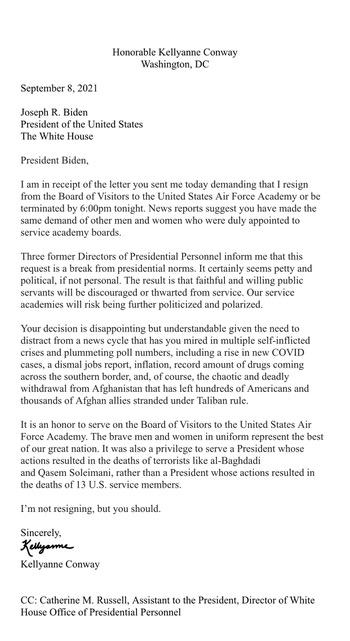 President Biden, I’m not resigning, but you should. pic.twitter.com/HuRYM4bLYP

New: White House demands resignations of Trump admin officials Kellyanne Conway, HR McMaster and Russ Vought from the Board of Visitors to the US Naval Academy — or be terminated effective 6p tonight.

Talk about a major burn.

Media outlets are just now picking up on this late breaking news.

According to The Week:

On Wednesday, the Biden administration requested the resignations of multiple individuals appointed to military advisory boards by former President Donald Trump, Politico reports. The officials were notified via letter, which alerted them that they would have until Wednesday night to step down; otherwise, they would be terminated.

But one booted board member — former counselor to the president Kellyanne Conway — was clearly not willing to take the news lying down, instead responding with her own letter calling on President Biden to abdicate his White House throne.

“Your decision is disappointing but understandable given the need to distract from a news cycle that has you mired in multiple self-inflicted crises and plummeting poll numbers,” wrote Conway, bashing Biden for rising COVID cases, inflation, and the convoluted Afghanistan withdrawal.

Conway said her post on the Board of Visitors to the U.S. Air Force Academy was an “honor,” and harkened back to the “privilege” of working for Trump “rather than a president whose actions resulted in the deaths of 13 U.S. service members.”

“I’m not resigning, Conway wrote to Biden, “but you should.”

It appears that Biden has threatened to FIRE them if they don’t resign by midnight tonight.

We’ll see if that actually happens.

The White House just told Kellyanne Conway and Sean Spicer to resign or be fired from a military academy board Donald Trump appointed them to.

The White House has told 11 officials on military academy boards, including Sean Spicer and Kellyanne Conway, to resign or be dismissed, a source says https://t.co/jDJRMD0gd0

After the disaster in Afghanistan, you’d think the Biden regime would want successful and helpful people in DC to help them.

But apparently Biden wants to “own” every crisis.

Hey, no one said he was the brightest bulb…

The Guardian has more details on the unfolding drama:

The White House confirmed on Wednesday that 11 Trump appointees to military service academy advisory boards, among them former press secretary Sean Spicer and adviser Kellyanne Conway, were asked to step down – or be fired.

Each board has a mix of members of Congress and presidential appointees. Members appointed by Barack Obama remained in place under the Trump administration.

Trump appointed Spicer, a commander in the US naval reserve, to the advisory board for the naval academy. Conway, campaign manager for Trump in 2016, was appointed to the board for the United States Air Force Academy in Colorado Springs.

Psaki said: “I will let others evaluate whether they think Kellyanne Conway and Sean Spicer and others were qualified, or not political, to serve on these boards, but the president’s qualification requirements are not your party registration, they are whether you’re qualified to serve and whether you’re aligned with the values of this administration.”

Spicer tweeted that Biden should be focusing instead “on the stranded Americans left in Afghanistan”, and said he would respond to Psaki on his show on the rightwing Newsmax channel.

Spicer and Russ Vought, director of the Office of Management and Budget under Trump and also appointed to the naval academy board, tweeted a White House letter that said if they did not resign they would be fired “effective 6pm tonight”.

Conway released a letter in which she criticised Biden’s performance in office and said: “I’m not resigning, but you should.”

Do you think Biden will actually fire Kellyanne Conway?

Let us know your predictions in the comments section below!