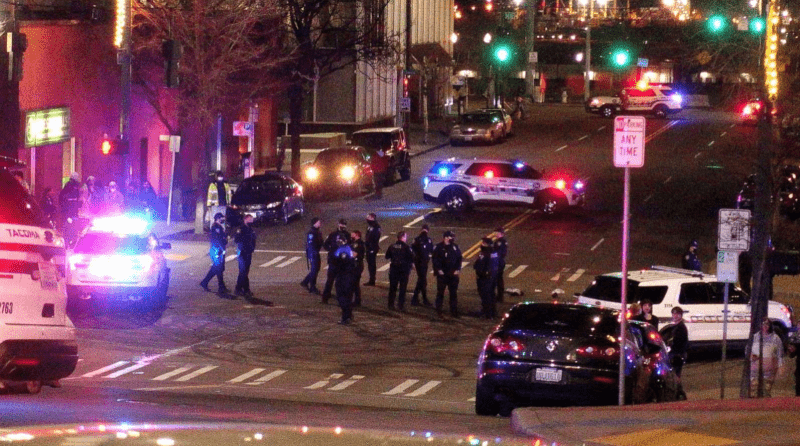 An independent investigation is underway after a Tacoma Police Department officer struck at least one pedestrian with his patrol car while trying to clear a crowded scene.

Officers responded to the intersection of South 9th Street and Pacific Avenue in Tacoma around 6 p.m. Saturday night after receiving “numerous reports” of an incident that was occurring there, according to a police press release.

When authorities arrived, there were several vehicles and about 100 people blocking the intersection, police said, but did not provide additional details on the incident. According to ABC Seattle affiliate KOMO, the crowd was watching a “street sideshow.”

Officers then began clearing the intersection, but during the operation, police said people surrounded a police vehicle as the officer was stopped in the street. The officer, “fearing for his safety,” then tried to back up but was unable to do so due to the crowd, police said. He then hit at least one pedestrian while trying to escape, police said.

“While trying to extricate himself from an unsafe position, the officer drove forward striking one individual and may have impacted others,” the press release states.

A witness wrote on Twitter that the officer was in pursuit of a driver doing burnouts nearby. Video shared by that same witness appeared to show the back tires of a police SUV moving forward running over the victim as the crowd screamed in horror.

Another video posted to the social media site appeared to show the SUV driving into a crowd of people, knocking several over before running over the victim.

The officer then “stopped at a point of safety and called for medical aid,” according to police. The victim was transported to an area hospital.

Puyallup Police Capt. Dan Pashon, who is part of the team investigating the incident, told KOMO that two people were transported to the hospital. One victim has been released, and the other remained in the hospital as of Saturday evening, KOMO reported.

Additional information about the victims and their conditions was not immediately available.

The incident has been turned over to the Pierce County Force Investigation Team, which will conduct an independent review, police said.

Tacoma Police interim Chief Mike Ake said in a statement that he is “concerned” that the department is “experiencing another use of deadly force incident.”

“I send my thoughts to anyone who was injured in tonight’s event, and am committed to our Department’s full cooperation in the independent investigation and to assess the actions of the department’s response during the incident.”