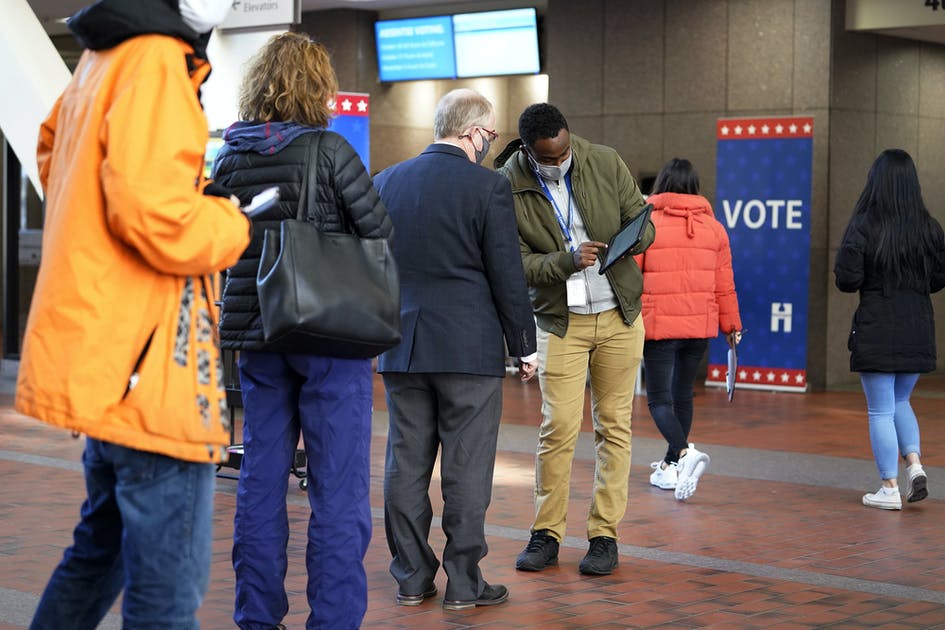 Drop-off voting sites around the Twin Cities reported heavy turnout and in some cases long lines with waits of up to four hours Saturday after the website Minnesotans use to track their absentee ballots experienced hardware problems.

A spokeswoman for Secretary of State Steve Simon said access to the public-facing tools were restored midmorning, after a “hardware issue impacting the online tools for voters.” The problem also affected the Statewide Voter Registration System. By late afternoon, all systems were restored.

Spokeswoman Risikat Adesaogun said voters were still able to cast absentee ballots during the outage thanks to a backup process for administering ballots when the voter registration system is down.

“We have no evidence of a hack or any outside actor involved in this incident,” she said. “Our IT team along with other experts … are still diagnosing the incident as it relates to our hardware and working to make sure that SVRS provides reliable service for the rest of this election season.

“From talking with experts in this field, we understand that it’s difficult to predict hardware incidents like what happened today — we can only react to them,” she said. “What I can say now is that it was a problem in the interaction between a storage device and a server, that made it difficult for local election officials to use SVRS. None of the issues had to do with load on the system.”

The ballot tracking site, mnvotes.org/track, has seen an increase in interest as a record number of Minnesotans vote early this year.

Officials expected to see more people dropping off ballots or voting early in person this weekend following a federal court ruling leaving open challenges to the validity of mail-in ballots that arrive after Election Day, even if they are postmarked by Tuesday.

Given the uncertainty, state officials are now urging voters who have not submitted their absentee ballots to drop them off or vote in person.

Saturday’s problem created longer-than-normal wait times for voters dropping off ballots in some parts of the metro area, while hardly affecting voting in others.

At the Carver County government centers, voters had to wait from 1½ to four hours depending on what time they showed up, said Kendra Olson, the elections manager.

“We always have a high turnout before the election,” she said. “What was unusual was the long line,” she said, that got longer due to social distancing.

Normally, she said, election workers check whether a voter is preregistered against a computerized state list. The computer then generates a label with a bar code that is affixed to the absentee ballot application.

But with the glitch, names had to be checked by election workers against a master list that the county generated, and the information then was filled out by hand.

Voters had to wait three to four hours in Brooklyn Park on Saturday, said Ginny Helms, the county’s elections manager. In Eden Prairie the waits were as long as 1¾ hours, she said.

Voters had to wait up to an hour at the Hennepin County Government Center, Gelms said. She said the county had a “virtual queue” for voters to wait, and they were sent a text when they were next in line so they did not have to stand in an actual physical line.

Once the state system came back up, labels were generated and put on envelopes to ensure that people don’t vote twice.

Andy Lokken, elections director for Dakota County, said waits at the county administration center in Hastings were no more than 20 minutes. Dakota County has 14 locations to vote, he said. That compares to two in Carver County.

Lokken said only three sites will be open in Dakota County on Sunday: Apple Valley, West St. Paul and Hastings. Election workers will spend part of the day catching up by generating labels from the state website to affix to outer envelopes containing ballots.