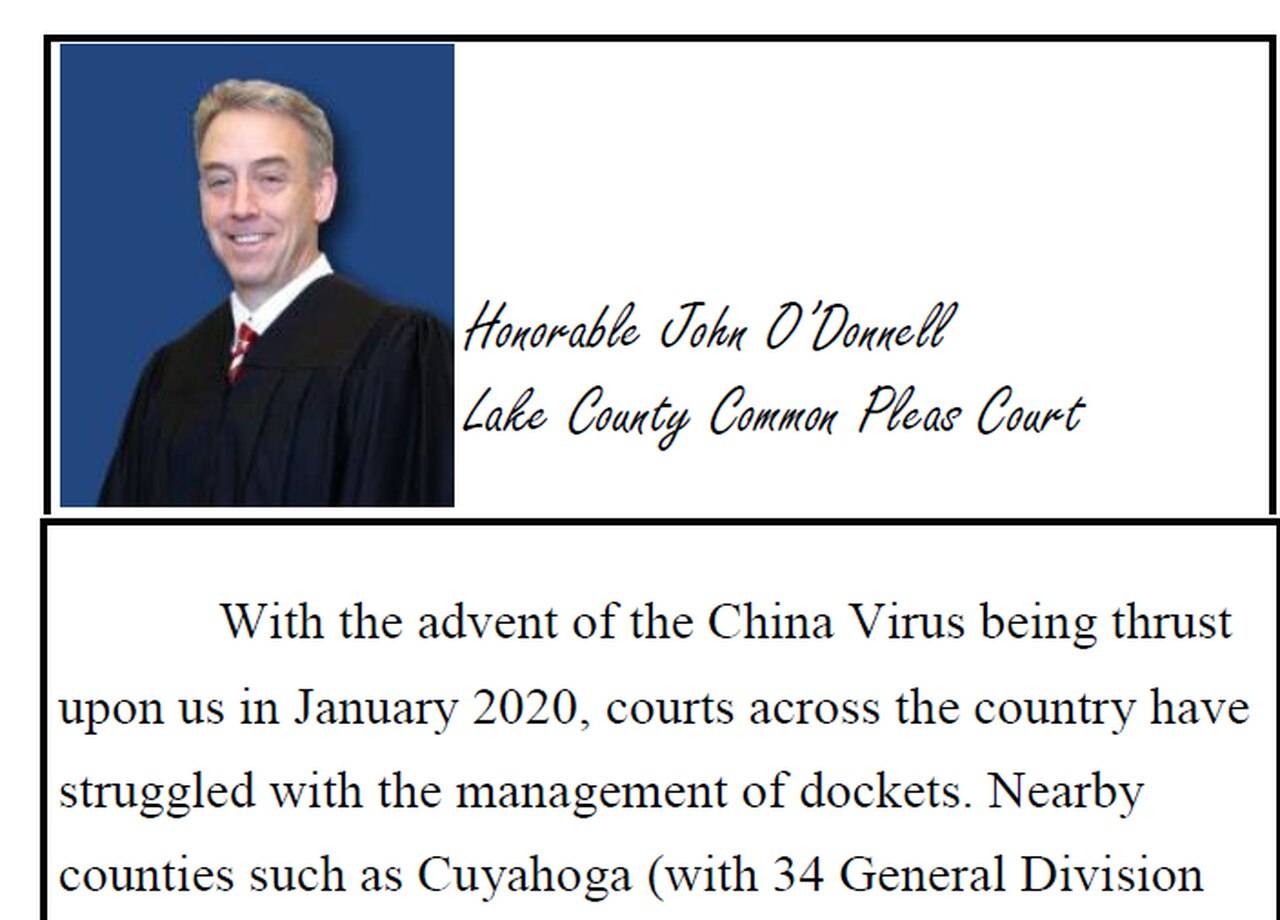 CLEVELAND, Ohio — Several Northeast Ohio and statewide organizations want a Lake County judge to apologize for using a “racist and xenophobic” term to refer to the coronavirus in a column published in the county bar association’s newsletter.

Lake County Common Pleas Court Judge John P. O’Donnell, a former assistant prosecutor and Willowick city councilman before he took the bench as a Republican in 2014, used the term “China Virus” three times in a column detailing how he handled his docket during the pandemic.

The Lake County Bar Association distributed the edition of the Lake Legal Views newsletter to its members on Wednesday, and it quickly ignited a firestorm in the legal community.

Leaders from the Asian American Bar Association of Ohio, the Anti-Defamation League of Ohio, Kentucky, West Virginia and Western Pennsylvania and the Norman S. Minor Bar Association, a legal organization for Black attorneys in Northeast Ohio, told cleveland.com that they condemned O’Donnell’s use of the term.

Many of the groups called on O’Donnell to apologize and meet with representatives from the Asian community and others to discuss the rise in anti-Asian discrimination and violence fueled by similarly caustic language used by political leaders and public figures.

O’Donnell did not respond to an email requesting comment or a voicemail left with his chambers Friday.

Lake County Bar Association president Joshua Strickland said in a statement provided to cleveland.com that O’Donnell’s column “used a phrase that is insensitive and offensive to many people,” but did not apologize for his organization publishing it.

O’Donnell’s comments come after studies have shown the number of hate crimes and incidents of discrimination and harassment targeting Asians skyrocketed across the country since the pandemic began. Research has also suggested that the incidents rose simultaneously as public figures, including President Donald Trump and highly partisan, right-wing media pundits, pushed the term’s use.

Margaret Wong, a Cleveland-based immigration attorney who is Chinese American, said O’Donnell’s comments are hurtful and unprofessional. She worried that they would further fan the flames of those who harbor anti-Asian bigotry.

“You are a judge,” Wong said. “You are held to a higher standard. You are educated. You went to law school. You don’t inflame people.”

The Asian American Bar Association of Ohio released a statement saying the organization in March 2020 joined more than 260 civil rights organizations in March 2020 to call for public leaders not to use language that would spur anti-Asian biases simply because health officials believe the first known cases of the virus originated in China.

“Unfortunately, a year later, we are again reiterating our call to condemn the continuing anti-Asian rhetoric related to the coronavirus disease,” the statement read. “Our organization, and community-at-large, is deeply troubled by the use of such discriminatory and racially-charged language by a member of the judiciary, particularly at a time when stereotypes associated with this language have led to a documented surge in anti-Asian bias and racist attacks related to the coronavirus.”

The group also noted that judges are supposed to remain impartial and refrain from using discriminatory language and expressions of bias of any kind that could call their fairness into question.

“This impartiality is a fundamental component of the American system of justice,” the statement said. “Such harmful and xenophobic language by any judge should be unequivocally denounced.”

Neil Bhagat, president of the state’s Asian American Bar Association, said he could not say that O’Donnell is incapable of treating someone of Asian descent in his courtroom fairly.

“The language is problematic because it raises that question,” Bhagat said. “That is why we want to be very clear about denouncing that kind of language. The justice system is about impartiality.”

Ciera Colon, president of the Norman S. Minor Bar Association, said she plans on filing grievances with the state’s disciplinary counsel to seek potential sanctions against O’Donnell for the comments that she called “racist, stigmatizing and discriminatory.” She also said she plains to file a complaint against the bar association for distributing the comments to the community.

“I could not believe a member of the Ohio bar, a sitting judge in Lake County, could blatantly refer to COVID-19 as the China Virus and think that’s OK,” Colon said.

Colon said her organization does not feel that O’Donnell could be impartial on the bench.

“I would definitely question whether or not I would get fair and impartial justice in his courtroom, 100 percent,” Colon said.

James Pasch, regional director of the Anti-Defamation League chapter covering Ohio, said that someone of O’Donnell’s stature in the community using this type of language feeds into the racism and xenophobia that Asians have dealt with since the pandemic began.

“There’s no place for racism in Ohio, and certainly no place for it in the courts,” Pasch said. “During difficult times, it’s up to leaders in our community to elevate those being targeted, not to contribute to further harm and feed into conspiracy theories.”

The Ohio Association of Criminal Defense Lawyers on Saturday released a statement strongly condemning O’Donnell’s use of the terms, saying it threatened to undermine the public’s confidence in the fairness of the judicial system.

“The courts are to be an example of honor and integrity wherein all who come before them should confidently expect they will be treated fairly. Such overt and reckless language sends the exact opposite message,” the statement said. “Considering Judge O’Donnell’s clear and public feelings, it is next to impossible to think that an Asian American, any person of color, or other minority could walk in his courtroom believing she or he would be afforded such fair treatment.”