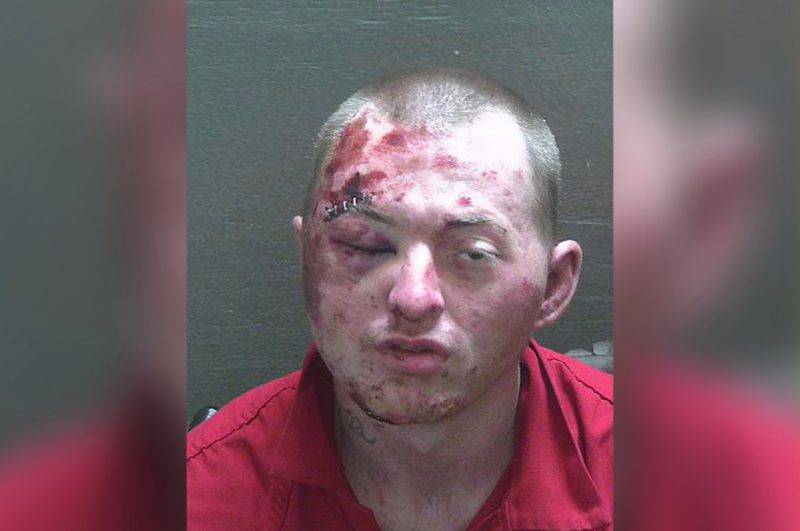 Some pictures are worth a thousand words — but this mugshot only needs six: don’t try to fight the police.

A Florida man was taken into custody after police said he kept attacking two sheriff’s deputies and their K-9 despite losing and regaining consciousness twice — and getting tased — during the scuffle, according to WEARTV.

The ill-advised incident, which left the suspect with multiple scrapes and bruises plus staples on his eyebrow, happened Thursday afternoon in Escambia County, on the state’s panhandle.

A driver called police to report a man was trying to grab his steering wheel and carjack his vehicle while walking in and out of traffic, according to the report.

When the victim drove away and returned home, he reportedly found the same suspect on his porch trying to break into his home, where his daughter was inside.

It is unclear how — or whether — the two men knew each other.

When deputies arrived, they allegedly saw 25-year-old Eric Tyler Mathis hiding behind a blue tarp on the victim’s property.

The suspect told sheriffs that it was his property, and yelled at them to leave, according to the station. Efforts to arrest him were met with “violent resistance,” police reportedly said.

When the taser failed to subdue the suspect, deputies deployed K-9 Zeek on Mathis. The suspect then tried to fight the police dog, reportedly grabbing him around the neck.

Eventually Mathis was taken into custody and charged with robbery, burglary, battery, resisting an officer and public order crime, officials said in a Facebook post.

“We are also glad neither the deputies or K-9 Zeek were seriously injured,” Sheriff Chip W. Simmons posted.