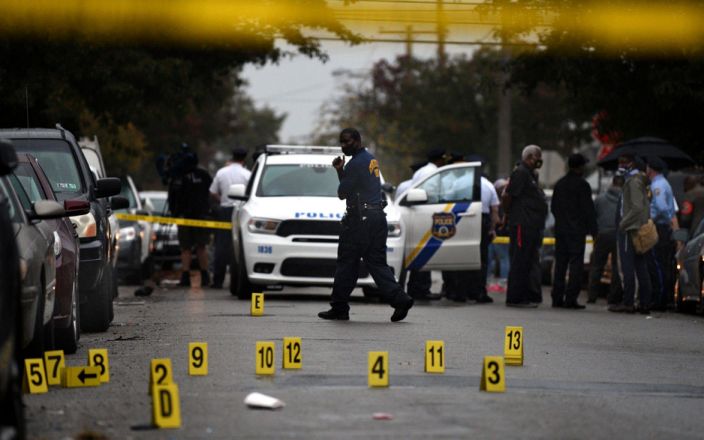 Police in Philadelphia fatally shot a 27-year-old black man after yelling at him to drop a knife, sparking protests that left an officer hospitalised when she was hit by a truck.

The shooting of Walter Wallace Jr. occurred on Monday afternoon, local time. Police were called to an incident in the Cobbs Creek neighbourhood as they responded to reports of an individual with a weapon.

Police spokesperson Tanya Little said the officers instructed Mr Wallace to put down his knife, but he instead “advanced towards” them. Both officers then fired “several times”.

Video of the confrontation has been widely circulated online. It shows officers pointing their guns at Mr Wallace while he walks behind a car. He then walks towards police as they yell instructions to him. Multiple shots are then heard and Mr Wallace collapses in the street.

Ben Crump, a civil rights lawyer who represents the family of George Floyd, tweeted: “Philadelphia cops fatally shot Walter Wallace Jr. today, firing 10+ times at him while he stood at least 10ft away.

“He allegedly had a knife but cops made NO attempts at de-escalating the situation in this video. They went straight to killing Wallace in front of his loved ones!”

According to Ms Little, the 27-year-old was hit in the chest and shoulder. Officers drove him to hospital in a police car, where he was pronounced dead.

Video of the incident does not clearly show if Mr Wallace was holding a knife, although witnesses have said he had one in his hand.

The shooting sparked a wave of protest in America’s sixth largest city. A crowd of several hundred gathered and police were deployed to respond to vandalism and looting, leading to clashes.

One officer, a 56-year-old female sergeant, was hospitalised with a broken leg after being hit by a speeding truck.

According to local police, a total of 30 other officers were injured after being hit by bricks and other projectiles. Protesters set a police car ablaze and more than 30 were arrested.

Mr Wallace’s father, Walter Wallace Sr, told the Philadelphia Inquirer that his son was also a father, was on medication and struggled with mental health issues. “Why didn’t they use a taser?” he asked.

The names and races of the officers were not immediately released.