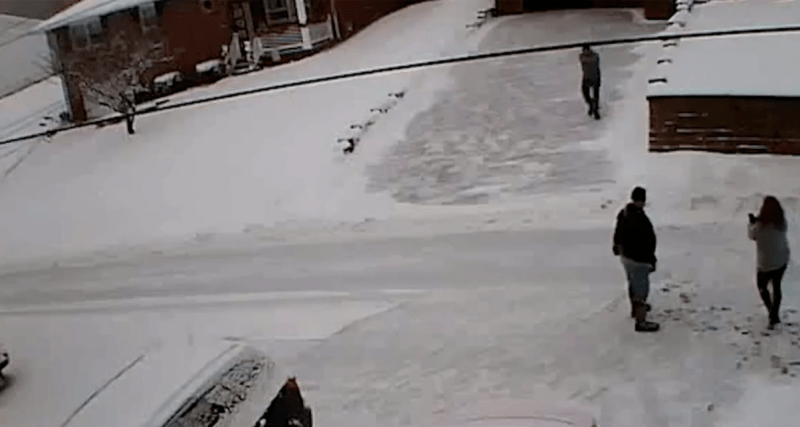 Disturbing new video captured the dramatic clash between a man and his neighbors shoveling snow in Pennsylvania that escalated to a murder-suicide.

Surveillance footage shows the married couple yelling obscenities at the man before he grabs a gun and shoots them both in the middle of the street Monday morning in Plains Township.

“If you step out of here, I’ll knock your a– out,” the male neighbor can be heard saying to the shooter.

Police said Jeffrey Spaide, 47, shot dead his neighbors, James Goy, 50, and his wife, Lisa, 48, after arguing about shoveling snow onto each other’s property.

“I’ll make your life a living hell living here, d–khead,” James can be heard shouting, to which Spaide responds, “What? … F–k you, you f–king scum.”

James’ wife, who is carrying a shovel, then chimes in, “You’re the f–king scumbag. You don’t know how to talk to somebody.”

“That’s right … You’re a p—y, p—y, p—y,” her husband continues while flipping off the man.

Jeffrey Spaide is seen approaching his neighbors, James Goy and his wife, Lisa, before shooting both dead.
Footage then shows Spaide walking down his driveway toward them, to which the female neighbor responds, “Go ahead. Go ahead.”

When it becomes clear that the man is holding a gun, James yells, “Put the gun down.”

The man fires several rounds, striking the male neighbor, before shooting his wife.

Footage shows James running back toward his house, while his wife falls to the ground in the middle of the street, where Spaide fires at her twice again.

“Call the cops,” James shouts before the gunman chases and shoots him again.

Three dead in ‘murder-suicide’ after snow shoveling dispute in Pennsylvania
His wife, lying on the ground, then cries out, “You f–ker, you!”

While others run over to help the couple, Spaide runs out with another, larger rifle.

“You should have kept your f–king mouth [shut],” Spaide can be heard saying before shooting the woman again.

Police said Spaide then went back inside his home and used a third rifle to kill himself.

Officials are investigating the gruesome episode as a murder-suicide.

The deadly confrontation came as Winter Storm Orlena tore through the East Coast, dumping as much as 30 inches of snow in some regions.