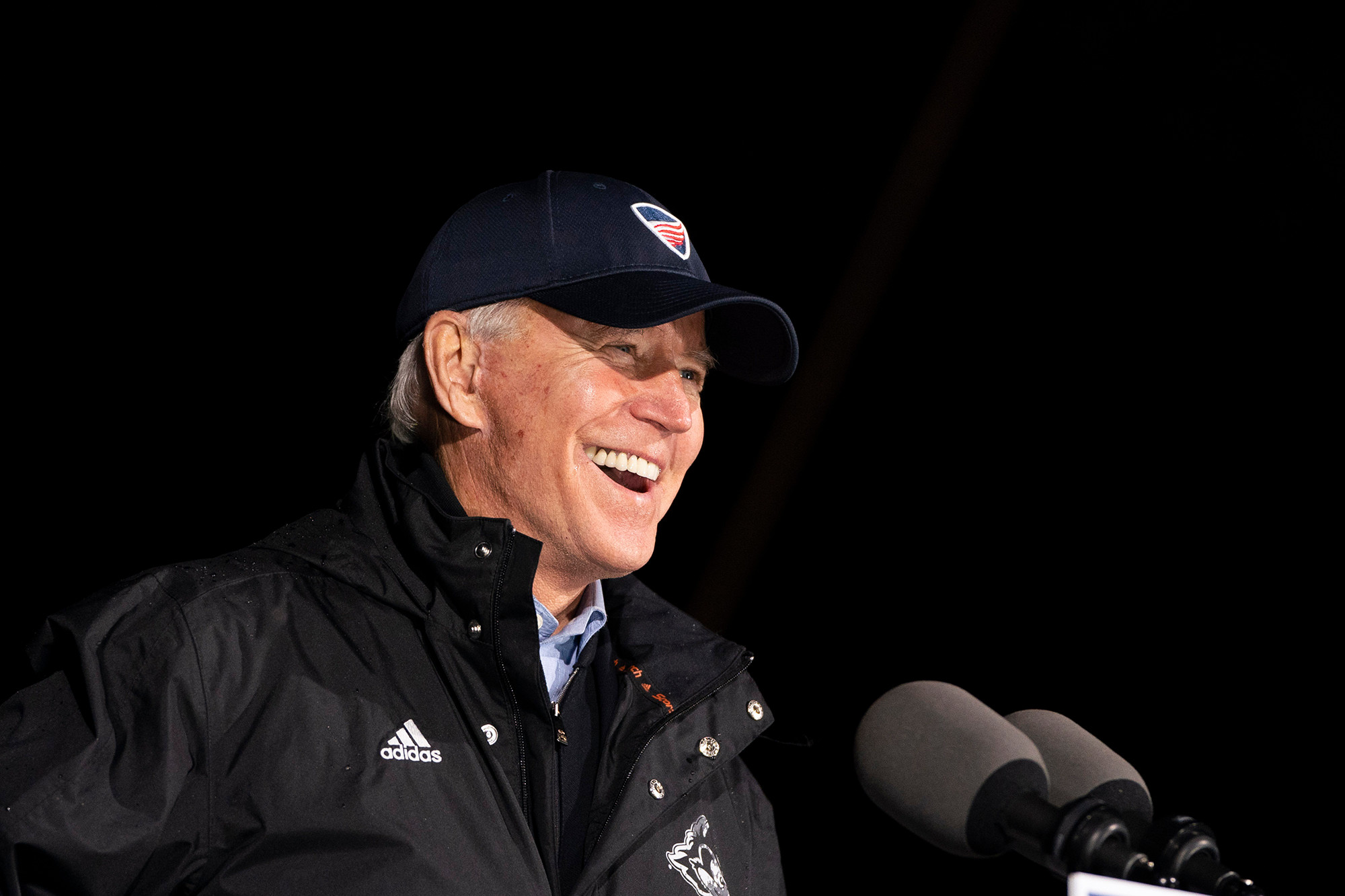 Has there been a worse candidate in history than Joe Biden?

When this election is over, the books revealing what went on backstage will be illuminating.

But the truth is there for anyone with eyes to see.

Obama, effortlessly cool, gave a warmup speech to the assembled cars before ramping up to a dramatic introduction: “My friend, the next president of the United States of America: Joe Biden!”

Moments ticked by, but there was no sign of the candidate.

Biden at last emerged from a nearby building and did a pantomime slow jog to the stage.

After Biden had shouted his way through a short teleprompter speech, Obama came back onstage, perhaps to escort him off, because Biden did not seem to know where he was.

Obama mimed an elbow pump with his former VP to signal they should leave the stage and then quietly whispered to him, after which it dawned on Biden he’d forgotten his mask, not for the first time. When your entire campaign is about mask-shaming Trump supporters, it’s not a forgivable lapse.

Poor Biden looked like a chastened schoolboy as he fumbled through his folder and all his pockets looking for that pesky piece of cloth.

He walked back to the lectern and searched, to no avail, before fumbling through his pockets again. Finally, he found the mask in his left trouser pocket, held it aloft sheepishly at Obama, and placed it on his face.

But then he paused and looked in seeming confusion at the microphone lying on the lectern where he’d left it. He picked it up and held it briefly to his masked face before laying it down again and rejoining Obama.

Whatever emotions were going through Obama’s mind at that point he kept under wraps, but he did slow down and look back solicitously as he shepherded Biden down the stairs and away from prying eyes.

In other words, he was treating the man who would be president like an invalid.

Really, it was sad.

But this is the story of the campaign, encapsulated in 70 seconds of video, and it is an indictment on the entire Democratic establishment which has conspired to trick America into voting for someone incapable of being president.

Biden’s cognitive decline has been obvious for months. It’s more than his trademark clumsy gaffes such as “You ain’t black” or “Poor kids are just as bright and just as talented as white kids.”

It’s the fact he often has no idea where he is.

“Hello, Dallas,” he said in Pennsylvania.

“Hello, Florida,” he said in Minnesota.

In Iowa, he thought he was in Ohio.

Or he doesn’t know what year it is. “I’m running as a proud Democrat for the United States Senate,” he has said more than once.

It’s his chronic inability with numbers, last month saying “200 million” Americans had died from COVID-19, which would be nearly two-thirds of the US population. During the primaries he declared guns have killed “150 million people” since 2007.

It’s his flashes of anger when challenged: “Hey, fat” he called one voter, “horse’s ass” he called another. He pokes people in the chest, wags his finger in their face and shouts. One young woman he bafflingly called a “dog-faced pony soldier.”

After previously saying he is tested “all the time,” he flew into a rage when asked by a black journalist if he’d had a cognitive test. “Why the hell would I take a test? C’mon, man . . . Are you a junkie?”

Trump now plays videos of Biden malfunctions at rallies. “He’s shot. Let’s face it,” the president said in Michigan on Sunday. “Those are the easy ones as we didn’t want to go any worse . . . They’re so bad that they’re not even funny.”

No, it’s not funny. It’s reprehensible.

Democratic powerbrokers schemed to choose Biden when there were other, more capable candidates on offer.

They knew his mind was going, and after 47 years in office, they must have known his character deficits.

In recent weeks, mounting evidence of his involvement in his family’s alleged influence-peddling schemes sent him back into the basement to avoid corruption questions.

The only reason the wheels haven’t fallen off his campaign is that almost the entire media establishment, coupled with the sinister power of Big Tech, is in collusion with the Democrats to cart Biden over the line and hide his frailties.

They were shamed into accepting blame for Hillary Clinton’s defeat in 2016 and now are trying to atone by giving Biden the easy run she convinced them she deserved.

But it hasn’t worked. In a sign of the panic now engulfing the Democratic Party, New York City Council Speaker Corey Johnson tweeted out an “urgent” plea late Saturday night for volunteers to go “knock doors in Pennsylvania,” the crucial swing state where Trump drew 57,000 people to a rally that day.

If Biden loses the election, as increasingly seems likely, Democrat voters ought to understand where their anger should be directed.

Not against Trump voters, but against a party machine that delivered a candidate so deficient that all the considerable mythmaking talents of East Coast journalists could not convince us he was up to being president.

What an irony that it may have backfired as polls point to increased black support for Donald Trump.

Rasmussen has polled the black vote at around 25 percent, though the margin of error is high because the sample size is small.

Trafalgar Group has Trump improving his black vote in Pennsylvania at 13.4 percent and in Wisconsin at a whopping 19.6 percent.

The rapper may have encouraged “shy” black Trump voters after he tweeted “Vote Trump” with a CNBC chart showing tax rates in New York under Biden would hit 62 percent: “I don’t care Trump doesn’t like black people 62 percent are you out of ya f–king mind.”

Even if Trump only improves his 2016 black vote of 8 percent nationally by a couple of points in the right places, it would spell catastrophe for the Democrats, says Florida-based political consultant Albert Marko.

“The statistics from early voting have shown a drop in the African-American turnout in key Democratic stronghold counties in Michigan and Pennsylvania with further evidence of black males supporting Trump more than in 2016,” he said.

“I cannot stress how this, along with a collapse of non-Mexican Latino vote, makes Biden’s chances of winning this election minimal at best.”

Maybe the reason Trump is winning over a disproportionate amount of the male vote is because he exudes unabashed “toxic” masculinity.

But refusing to bow to new woke gender roles may have won him the election.