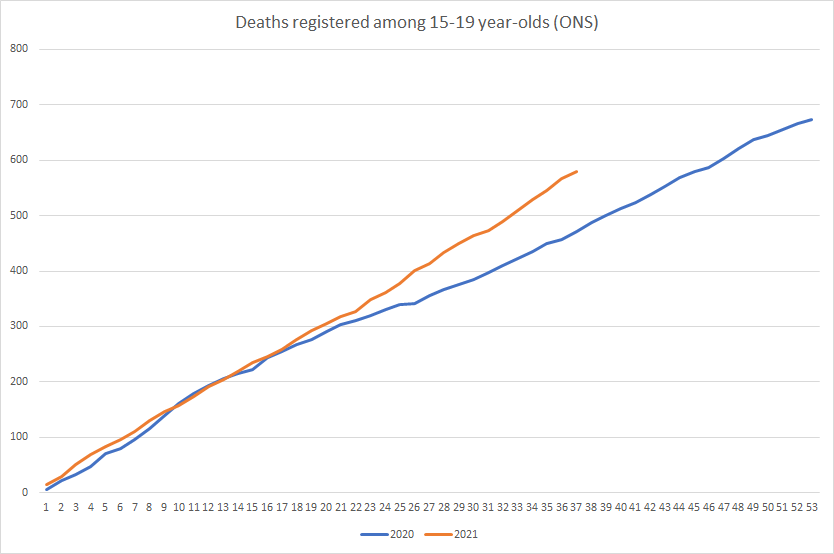 A post on the Daily Exposé on Thursday showed concerning statistics from the Office for National Statistics (ONS) indicating that deaths among teenagers over the summer have increased significantly on the previous year, coinciding with the vaccine roll-out. (Unfortunately the equivalent data isn’t available for previous years as prior to 2020 the breakdown was into 1-14 and 15-44 year-olds.)

The marked divergence around week 23 broadly corresponds to when the vaccination programme among the age group was being ramped up, as indicated below: Importantly, there is no similar rise among younger children aged 1-14, as the plot below shows.

Interestingly, 2020 was a low-mortality year for this age group, presumably due to fewer deaths due to road accidents and such like. 2021 has had lower mortality again, illustrating how little threat COVID-19 is to children: Covid cannot be blamed for the sudden rise in deaths among 15-19 year-olds in summer 2021, as the ONS data shows that over the period there were only nine deaths with Covid in that age group.

So what has suddenly increased the mortality rate since June in 15-19 year-olds, but not in younger children? It coincided with the rollout of vaccines, which are known to cause rare but serious side-effects in young people, especially myocarditis (heart inflammation).

Is this real-world evidence that over the summer the vaccines killed nine times as many 15-19 year-olds as Covid did – 81 versus nine? If not, what are the other possible explanations and how likely are they?

I suggest that the medical authorities make an urgent priority of investigating the reasons for the sudden uptick in deaths among teenagers since June, before rolling out any more vaccines to young people.