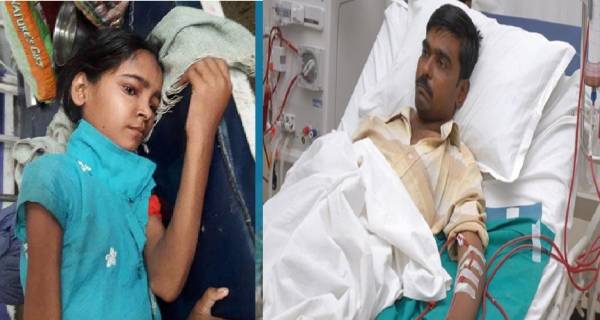 What dad would not give anything and everything to save his child’s life? Even if it means risking everything, it is a small price to pay.

One brave father stepped up to save his daughter’s life and now both are doing great. Their story will inspire us all.

Esme Chester was taken to the doctor because of a cough. After the routine blood test came back, her parents received horrible news. Their daughter was experiencing end stage kidney failure. Her parents were devastated.

The parents, thirty seven year old father Lee Chester and Mother Rachel Mulhearn, twenty seven, could not believe what they were hearing.

Three year old Esme kept her beaming spirits and positive attitude through nonstop dialysis treatments. But as her father recalls, “Things changed overnight. Her kidney failure was end stage – the worst it could get.”

As her condition worsened, Esme was placed on a regimen of twelve hour dialysis treatments every single day for fourteen months. Finally, in desperation, Lee and Rachel had themselves tested as potential organ donors.

Both parents were positive, with Lee stating “We were both tested and although Rachel was a match, I was a better match. I said yes immediately.”

The excitement was soon overshadowed by a series of setbacks, as young Esme suffered a debilitating stroke in December, that delayed the transplant and landed her in intensive care. There was a significant rehabilitation period that lasted through March, in which Esme had to relearn how to eat and walk.

The little champ even had to celebrate her birthday in the hospital.

Finally, both daughter and father were cleared for the transplant surgery earlier this month, and after a precarious and arduous procedure, both are happily on the mend.

Describing how little Esme has handled all the issues Her dad says,“She’s so strong-willed, that’s part of what’s she been through. She knows her own mind, she’s very funny, caring and she says she loves us all the time. But she also has a strength from all this.”

He continued, saying, “This is something that any parent would do, you just say yes, it’s in the terms.”

Feeling good enough to speak with the media Lee says, “We are both doing really well. I’m so glad it’s gone well for Esme. She’s eating mashed potato in bed. I’m quite sore so I’ll have to milk it at home for a bit. It really does show the importance of opting in for organ donation. It really does save lives.”

And with that statement, the heroic Mr Chester may be making the most important gesture of all.

As he points out, organ donation is a matter of life and death, and is a simple act that every one of us can perform, with a simple signing of a driver’s license or clause in an end of life directive. While we will not all give to someone we know and love, by becoming organ donors we will each save someone who is known and loved by a desperate father and mother.