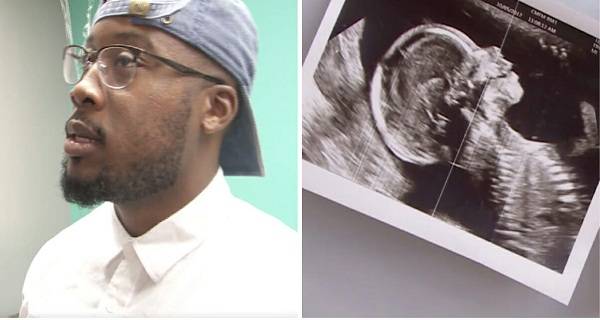 A beautiful couple from Waldorf, Maryland, fell in love 10 years ago. In August 2014, Robert and Nia Tolbert said ‘I do.’ They already had a son, Shai, 3, and Nia was pregnant with twin boys when she walked down the aisle. The couple joked about having a large family but were happy with just three kids. Then, two years after welcoming twins Riley and Alexander, Nia and her husband got some surprising news. Nia found out she was pregnant again. When she went to the doctor’s office for an ultrasound, the nurse asked if multiples were common in her family. That’s when Nia figured out she was having another set of twins, according to WUSA 9.

But when she left the exam room to use the bathroom, she was completely shocked by what the nurse told her when she returned:

Nia was flabbergasted. Even though both she and Rob have multiples on both sides of their families, she never expected to get pregnant with triplets.

Triplets are quite rare in natural pregnancies. And for a mother who already had a set of twins, it’s even more uncommon for triplets to come next. Nia found out she has a rare condition called hyperovulation in which more than one egg ovulates at the same time.

Nia then had to tell her husband that they were expecting triplets. She knew it would be challenging raising such a big family, but she was very grateful.

“Oh I passed out. I hit the bed. I blinked twice, when I woke up I saw that some time had elapsed on the clock.”

The couple started guessing what gender their babies would be. Since they already had three sons, they were eager to find out if there would be any daughters in the mix. During a gender reveal party, they once again got the surprise of a lifetime.

Nia and Robert discovered the triplets were all girls. Robert noted:

“The house is officially balanced now, because the three boys they flock to their mother. They want to defend her. They don’t give her a second to breathe or do anything on her own. Now I have my own little posse. They will follow me, and protect me, and take care of me.”

Watch the video below to see the amazing gender reveal celebration for yourself.