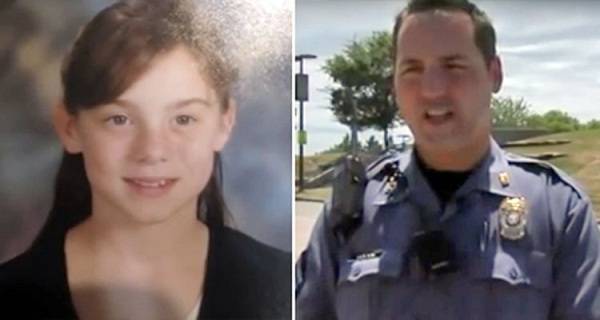 People are born in different situations, while some kids are lucky to live inside a happy house with loving parents, others are born orphans or even surrounded by drugs, neglect and violence!

Klynn Sclaes, 9-year-old, along with her two brothers were looking for food to steal, it didn’t matter where to steal as long as they can get it. Just down the road from their house, there was a shop, the 7-Eleven, so they had no choice but to give it a try.

Klynn used to wave at a particular police officer who passes every day by their house. The officer would wave back at her, smile and keep walking.

Klynn said:“He was the one adult I could trust as a kid”

She had no idea what’s the officer’s name, but he stopped once and told her that he would be there for them if they ever needed it and that he would protect them.

Klynn kept that in her mind, those kind words stuck with her and remembered them whenever she was going through a difficult day.

She said:“Those words would come to me during the worst times of my childhood life.”

The police officer didn’t say that for nothing, he was honest and he was ready to help her whenever she needs help.

And that’s what exactly happened, one day, the police officer passed the house as usual, but he didn’t see Klynn waiting there to wave to him. He got bad feeling about it and instantly thought something was wrong!

Someone else would just leave, but this officer still wanted to make sure if everything was OK. so he went straight to the house, walked in and found the little girl collapsed on the floor, not able to breathe properly.

The kind officer quickly picked her up and took her to the ER room. It turns out she was lacking nutrition. She was starving with nothing to eat or drink.

She later wrote on Facebook:“You saved my life, literally”

She can’t remember every detail of that day. But the thing that’s still clear for her is seeing a halo of light around the officer as he was standing over her that day when she was really sick.

She said:“Jeff Colvin is not just a hero to me, but my guardian angel also. He was there when I had no one”

The two became friends since that day, but lost contact when Klynn moved to Texas from Kansas City. Klynn couldn’t forget about her friend and how he saved her life. She shared her story 20 years later and a woman with the Kansas City Police Dept read her story and started looking for the Officer…

He was really taken back with shock, he said:“Most times we go through our career without realizing if we truly helped anybody out.”

Colvin remembered Klynn and her family and they got to reunite with each other.

Klynn said: “I just never thought this would ever happen, to find my hero …I am so happy that I was able to thank you in person.”

“I hope one day I can become someone’s hero, or make a positive impact like you did mine.”