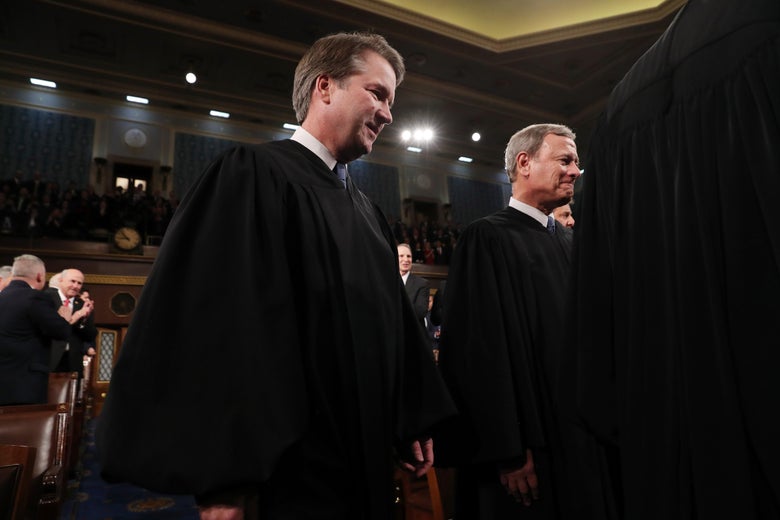 Slate’s Who Counts? series is made possible by the support of Slate Plus members and readers like you.

As the Senate was voting to elevate Amy Coney Barrett to a lifetime position on the Supreme Court on Monday night, the immediate stakes for the entire country were made suddenly clear by a critical election ruling from the court she now joins. On Monday night, Justice Brett Kavanaugh released a radical and brazenly partisan opinion that dashed any hopes he, as the Supreme Court’s new median justice, might slow-walk the court’s impending conservative revolution, while also threatening the integrity of next week’s election. In an 18-page lecture, the justice cast doubt on the legitimacy of many mail ballots and endorsed the most sinister component of Bush v. Gore. America’s new median justice is not a friend to democracy and we may pay the price for Barrett’s confirmation in just eight days.

Monday’s order from the Supreme Court blocked a federal judge’s order that had tweaked Wisconsin’s voting laws in light of the pandemic. The judge directed election officials to count ballots that were postmarked by Election Day but received by Nov. 9, finding that the unprecedented demand for mail ballots combined with Postal Service delays could disenfranchise up to 100,000 voters. An appeals court blocked his decision on Oct. 8, and on Monday, SCOTUS kept it on hold by a 5–3 vote. The court offered no majority opinion, but Chief Justice John Roberts, Justice Neil Gorsuch, and Kavanaugh all wrote concurrences. Justice Elena Kagan penned a trenchant dissent joined by Justices Stephen Breyer and Sonia Sotomayor.

Kavanaugh’s opinion is the most notable of the bunch because he is the new median justice and the opinion is frankly terrifying. In one passage, Kavanaugh attempted to defend the Wisconsin law disqualifying ballots received after Election Day. He pointed out that “most States” share this policy, explaining:

Those States want to avoid the chaos and suspicions of impropriety that can ensue if thousands of absentee ballots flow in after election day and potentially flip the results of an election. And those States also want to be able to definitively announce the results of the election on election night, or as soon as possible thereafter.

Kavanaugh then quoted New York University Law Professor Richard Pildes stating that the “longer after Election Day any significant changes in vote totals take place, the greater the risk that the losing side will cry that the election has been stolen.” (Kavanaugh was quoting an article in which Pildes encouraged states to extend their ballot deadlines, directly contradicting Kavanaugh’s argument.)

It is genuinely alarming that the justice cast these aspersions on late-arriving ballots. In at least 18 states and the District of Columbia, election officials do count ballots that arrive after Election Day. And, in these states, there is no result to “flip” because there is no result to overturn until all valid ballots are counted. Further, George W. Bush’s 2000 election legal team—which included Barrett, Kavanaugh, and Roberts—argued during that contested election that ballots arriving late and without postmarks, which were thought to benefit Bush, must be counted in Florida.

Finally, and most importantly, late-arriving ballots have handed the election to a candidate who was behind on election night on many occasions in the United States—most recently, in multiple California congressional races in 2018. Two years ago, California anticipated this possibility after extending the deadline for mail ballots, a move that signaled no chicanery. Yet Republicans seized upon it to delegitimize multiple Democratic victories. Even putative moderate Republican Young Kim raised the notion when she lost her lead after Election Day. Now the country’s highest court is ready to give any such challenges the ammunition they need heading into one of the most fraught election days this country has ever seen due to the COVID-19 pandemic and a would-be strongman in the White House.

President Donald Trump has taken the pastime of false voter fraud allegations to a dangerous new extreme, repeatedly rejecting the validity of mail ballots that arrive after Nov. 3. Indeed, roughly 15 minutes after Kavanaugh’s opinion came down, Trump tweeted: “Big problems and discrepancies with Mail In Ballots all over the USA. Must have final total on November 3rd.” Twitter concealed his tweet with a warning its content is “disputed and might be misleading about how to participate in an election.” But there is nothing Twitter, or anybody else, can do to warn Americans about Kavanaugh’s lies about “chaos and suspicions of impropriety” when states try to count every ballot next month.

And there was another, even more startling assertion in Kavanaugh’s dissent. While referencing an earlier case, Kavanaugh dropped a bombshell in a footnote: He endorsed an argument that was too extreme for even the Bush v. Gore majority that decided the 2000 election, one that would give the Supreme Court the wholly new right to overrule state courts on their own election laws. In Bush v. Gore, three justices—William Rehnquist, joined by Antonin Scalia and Clarence Thomas—tried to overturn the Florida Supreme Court’s interpretation of the state’s own election law. As a rule, state Supreme Courts get final say over the meaning of their own state laws. But Rehnquist, Scalia, and Thomas argued that SCOTUS must review their decisions to ensure they comply with the “intent of the legislature.” In other words, the Supreme Court gets to be a Supreme Board of Elections that substitutes state courts’ interpretation of state law with its own subjective view of a legislature’s “intent.” Anthony Kennedy and Sandra Day O’Connor balked at this theory, refusing to sign onto it.

Yet Kavanaugh cited Rehnquist’s concurrence as if it were precedent. As Rehnquist “persuasively explained in Bush v. Gore,” Kavanaugh wrote, “the text of the Constitution requires federal courts to ensure that state courts do not rewrite state election laws.” It is surreal to read these words. Rehnquist’s concurrence garnered just three votes, so it is not precedent at all. Neither, for that matter, is the majority decision in Bush v. Gore, which warned future courts never to rely on it as precedent. To set a good example, SCOTUS itself has never cited any part of Bush v. Gore as precedent. Its opinions are ghosts that haunt modern constitutional law. Yet Kavanaugh just declared in a footnote that he not only agrees with Rehnquist but actually views his opinion as bona fide precedent.

Roberts distanced himself from Kavanaugh’s position on Monday, but Barrett’s confirmation renders his views largely irrelevant. We can probably expect Kavanaugh, along with Thomas, Alito, Gorsuch, and now Barrett, to smack down state Supreme Courts that try to expand voting rights, or even just count every ballot.

Monday’s opinion was especially bizarre because the justice has previously gone out of his way to distance himself from the more strident conservatives. In cases involving LGBTQ rights and Dreamers, for instance, he has declined to sign onto Thomas’ and Alito’s partisan rants, presenting himself as a reasonable guy who tries really hard to do the right thing. The most generous explanation of Monday’s frightening opinion is that Kavanaugh started to defend his vote in these election cases and got carried away, digging a deeper hole for himself as he tried to respond to the unanswerable rejoinders in Kagan’s dissent.

The most pessimistic view is that Kavanaugh knows exactly what he’s doing: Laying the groundwork to reject enough ballots to hand Trump an unearned second term while daring Democrats to do something about it, or to potentially decide critical congressional races at least. Perhaps Kavanaugh is planting his flag now, proclaiming that he won’t strike compromises for the sake of the court’s legitimacy; to the contrary, he’ll toss fuel on the fire, confident Democrats are too cowardly to retaliate.

Whatever the reasons behind Kavanaugh’s performance on Monday, he has given the nation another legitimate reason to fear that this election may end with a Bush v. Gore–like disaster for American democracy, but even worse than the original.

Help us cover the central question: “Who counts?” Your Slate Plus membership will fund our work on voting, immigration, gerrymandering, and more through 2020.