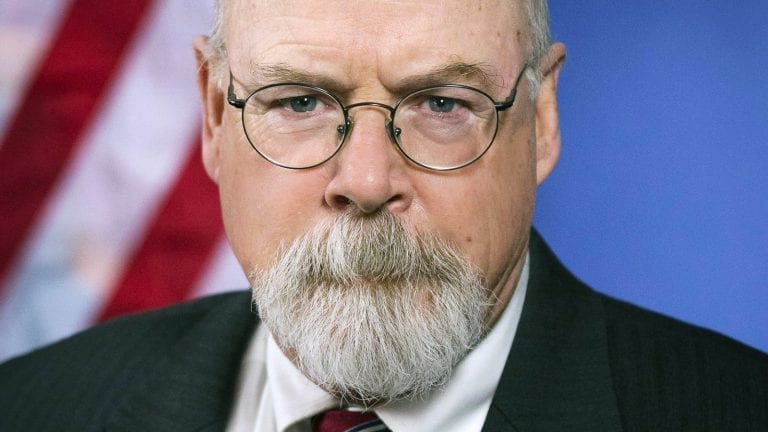 Sara Carter kept telling us the Durham Report was coming….

….and there would be indictments.

Heck, I was even skeptical about Durham existing!

Still am, actually, until we see a photo or video of him other than those 4 that exist.

Which is why I wrote this:

But now we have breaking news…..

NEW: Prosecutor John Durham has told a cyber lawyer — who works for the firm that repped Clinton campaign — that he wants to indict him on suspicion of lying about who he repped when he told F.B.I. in ’16 about potential ties b/w Trump and Russia. https://t.co/KiSUIeGuzh

On the latest John Durham developments –

The exposure of DNC/Clinton lawyer Michael Sussman – and his 8/2016 contacts with Fusion GPS as the false Trump/Alfa Bank story heated up.https://t.co/DiDM4gP0J8

Here is a great summary, from Technofog:

Special Counsel John Durham “will ask a grand jury to indict” former DNC/Clinton campaign lawyer (and Perkins Coie partner) Michael Sussman for giving false statements. The false statement charges would relate to a September 19, 2016 meeting FBI lawyer James Baker had with Sussman, where Sussman relayed to the FBI the discredited theory that the Trump Organization was communicating with Alfa Bank.

Mr. Baker, the former F.B.I. lawyer, is said to have told investigators that he recalled Mr. Sussmann saying that he was not meeting him on behalf of any client.

This was contradicted by (1) Sussman’s testimony to Congress; and (2) Sussman’s own billing records. Sussman’s lawyers acknowledged “they expected him to be indicted.”

As to Sussman’s testimony, here is a portion where he discusses the Alfa Bank information was given to him by a client.

And that’s the big point….

If you think this is the ONLY indictment we will see, or that it ends here, you’re dreaming.

No, they start with people like this to get them to flip on the big dogs.

What is the purpose of a Grand Jury?

If Durham is the Prosecutor and he is presenting evidence to said Grand Jury what comes next?

– The Media is barred from proceedings.

– The accused has no knowledge nor right to pic.twitter.com/YbUsVdRNm6

From the Washington Examiner:

The charge is said to be related to an alleged false statement to the FBI about a client’s identity when Sussmann pushed now-debunked claims about secret communications between Russia’s Alfa Bank and the Trump Organization in the lead-up to the 2016 presidential election.

Durham “has told the Justice Department that he will ask a grand jury to indict a prominent cybersecurity lawyer on a charge of making a false statement to the FBI,” the New York Times reported on Wednesday, citing “people familiar with the matter.”

The report said Durham’s case against Sussmann, who works at the powerhouse Perkins Coie law firm, “centers on the question of whom his client was when he conveyed certain suspicions” about former President Donald Trump and Russia to then-FBI General Counsel James Baker in September 2016.

Sussmann “relayed data and analysis from cybersecurity researchers who thought that odd internet data might be evidence of a covert communications channel” during the meeting with Baker, the report said.

Durham has until the weekend to charge Sussmann because of a five-year statute of limitations. Neither Durham nor the Justice Department has commented on the report as of press time. Sussmann has denied wrongdoing.

Baker testified in 2018 that Sussman, a former DOJ colleague of his, shared the Alfa Bank claims with him during a September 2016 meeting. Notes from DOJ official Bruce Ohr’s December 2016 meeting with Glenn Simpson show the Fusion GPS co-founder said the New York Times was wrong to doubt the story that Alfa Bank and the Trump Organization were communicating through secret servers.

DOJ Inspector General Michael Horowitz criticized the Justice Department and the FBI in December of 2019 for at least 17 “significant errors and omissions” related to the Foreign Intelligence Surveillance Act warrants against Trump campaign associate Carter Page in 2016 and 2017 and for the bureau’s reliance on Steele’s unverified dossier.

This followed the release of special counsel Robert Mueller’s report on the Russia investigation in April of that year.

Robby Mook, Hillary Clinton’s 2016 presidential campaign manager, said in 2017 he authorized Marc Elias — who, until recently, headed Perkins Coie’s political law group and started his own firm this summer — to hire an outside firm to dig up dirt on Trump’s connections with Russia in 2016. Mook said Elias received information from Fusion GPS about the research into Trump and Russia in 2016, and Elias periodically briefed the Clinton campaign.

Sussman is reportedly the source for news stories in 2016 about alleged secretive server claims.

The New York Times reported, “Sussmann’s lawyers have told the Justice Department that he sought the meeting because he and the cybersecurity researchers believed that the New York Times was on the verge of publishing an article about the Alfa Bank data and he wanted to give the FBI a heads-up.” However, the outlet said that “in fact” it “was not ready to run that article, but published one mentioning Alfa Bank six weeks later” — just days before the 2016 election.

Durham found an “inconsistency” in Sussmann’s story, according to the New York Times report, which added that Baker “is said to have told investigators that he recalled [Sussmann] saying that he was not meeting him on behalf of any client.”

NATIONAL POLL: Should Nancy Pelosi Be Removed From Office?

However, Sussmann testified to the House Intelligence Committee in December 2017 that he had sought out the FBI meeting on behalf of an unnamed alleged cybersecurity expert client.

During that deposition, Sussmann indicated his client was not the Clinton campaign or the co-founders of Fusion GPS.

Durham also obtained “internal billing records” from Perkins Coie that show when Sussmann “logged certain hours as working on the Alfa Bank matter” — though not the Baker meeting — “he billed the time” to Clinton’s 2016 campaign, the news report said.

“Mr. Sussmann has committed no crime,” Sussmann attorneys Sean Berkowitz and Michael Bosworth told the New York Times. “Any prosecution here would be baseless, unprecedented, and an unwarranted deviation from the apolitical and principled way in which the Department of Justice is supposed to do its work. We are confident that if Mr. Sussmann is charged, he will prevail at trial and vindicate his good name.”

Sussmann’s attorneys “are said to have insisted that their client was representing the cybersecurity expert he mentioned to Congress and was not there on behalf of or at the direction of the Clinton campaign.” They “are also said to have argued that the billing records are misleading” because Sussmann “was not charging his client for work on the Alfa Bank matter, but needed to show internally that he was working on something,” the outlet said.

They never thought she would lose.