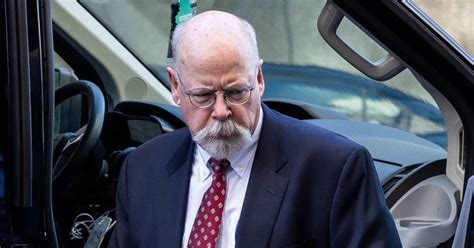 The jury ruled that Michael Sussman is NOT guilty! ONLY in a CORRUPT D.C. Courtroom!

Earlier I reported that the jury in the Michael Sussmann criminal case resumed deliberations today after the long Memorial Day weekend. While prosecutors presented overwhelming evidence over the last two weeks that Sussmann lied to then-FBI General Counsel James Baker in 2016, an acquittal by the D.C. jury still seemed likely.

Judging the success of Special Counsel John Durham’s probe into the investigation of President Trump and those associated with the Trump campaign and administration should not rest on the outcome of the Sussmann prosecution, however. In fact, even if the special counsel’s office scores a conviction in its false statement case against Sussmann, that would do little to right the scales of justice unbalanced by more than five years of the politically motivated abuse of power that began as Crossfire Hurricane and continued even after Special Counsel Robert Mueller issued his final report.

So, measuring Durham’s performance by the outcome in United States v. Sussmann would be a mistake. Also, especially in the case of an acquittal, it would ignore the valuable information exposed related to the broader Spygate scandal. Using that gauge as a measure, the special counsel’s office succeeded wildly.

Durham Proved the Collusion Hoax Was a Hillary Clinton Enterprise

On September 19, 2016, Sussmann provided Baker data and whitepapers purporting to show a secret communications network between the Russia-based Alfa Bank and Donald Trump. In indicting Sussmann for allegedly lying to Baker during this meeting, the special counsel’s office revealed in its 27-page speaking indictment “a scandal much deeper than merely Sussmann’s role in a second Russian hoax — a scandal that entangles the Clinton campaign, multiple internet companies, two federally-funded university researchers, and a complicit media.”

Since then, proof that the Clinton campaign held near-total responsibility for launching the Russia-collusion hoax mounted with nearly every legal filing. It eventually culminated during the Sussmann trial when former Clinton campaign manager Robby Mook testified that Hillary Clinton personally “agreed with the decision” to feed the unverified—and quickly debunked—theory that Trump was communicating secretly with Russia through a back-door Alfa Bank channel.

Other trial evidence confirmed the Clinton campaign paid the law firm Perkins and Coie a flat fee of as much as $130,000 per month during the campaign, and authorized lead counsel Marc Elias to hire Fusion GPS for opposition research. Billing records then showed Sussmann charged his time for working the Alfa Bank hoax—including the time he spent meeting with the FBI’s General Counsel Baker—to the Clinton campaign. In fact, late last week, the jury in the Sussmann case learned that Sussmann even charged the Clinton campaign for two thumb drives purchased at Staples used for the Alfa Bank project.

While the Sussmann case focused on the Alfa Bank hoax, the detailed evidence presented over the course of that prosecution also confirmed the Clinton campaign paid for Fusion GPS to compile the Christopher Steele dossier. Given Mook’s testimony that he sought Clinton’s approval to push the Alfa Bank claims to the media, it is only reasonable to infer she likewise personally green-lighted the peddling of the claims contained in the Steele dossier.

But even if Clinton did not personally approve of peddling the lies contained in the Steele dossier, the Sussmann case established that her campaign paid for the lies—including those emanating from the Russian-national Igor Danchenko. And Special Counsel Durham’s indictment against Danchenko reveals that individuals hired by the Clinton campaign fed that Russian disinformation to U.S. media, law enforcement, and intelligence agencies.

Beyond exposing the Clinton campaign’s responsibility for the Russia-collusion hoax, Durham’s prosecution of Sussmann sets the stage for potentially even more damaging revelations about Clinton’s personal involvement in the scandal.

To date, the Clinton campaign has hidden behind claims of attorney-client privilege to prevent Durham from obtaining documents, communications, and testimony through the grand jury. The Clinton campaign claimed material prepared by, or communications between, Perkins and Coie attorneys, Fusion GPS employees, investigators, and other third parties are protected by attorney-client privilege. Prosecutors in the Sussmann case, however, succeeded in obtaining a court ruling that several documents withheld by Fusion GPS, based on the Clinton campaign’s claims of privilege, are not protected and must be given to prosecutors.

While Fusion GPS continues to withhold thousands of documents, this precedent provides the special counsel’s office solid grounds to challenge the privilege in both the Danchenko case and in other grand jury probes that may be pending. Piercing the privilege will prove key to further exposing Clinton’s personal involvement in Spygate.

No matter the verdict the jury returns in the Sussmann case, the special counsel’s prosecution also revealed that the Alfa Bank stories were hoaxes—and the scandalous way they were crafted and seeded to America.

Voters first learned of the supposed connection between Trump and the Russian-based Alfa Bank about one week before the 2016 U.S. presidential election, when Slate reported that trusted cyber experts had discovered an “irregular pattern of server lookups” that suggested “a sustained relationship between a server registered to the Trump Organization and two servers registered to an entity called Alfa Bank.”

While the Slate article hedged somewhat by admitting “what the scientists amassed wasn’t a smoking gun,” and that the data “doesn’t absolutely preclude alternative explanations,” the headline, “Group of Computer Scientists Believes a Trump Server Was Communicating With a Russian Bank,” captured the essence of the article—and what its author Franklin Foer, Fusion GPS, and the Clinton campaign wanted Americans to believe.

The Alfa Bank hoax did not end there, however, or even after Trump’s election. Sussmann continued to push the theory to the CIA in February 2017, following Trump’s inauguration. Soon thereafter, Daniel Jones, a former staffer for the U.S. Senate Committee on Intelligence, Ranking Member Sen. Dianne Feinstein, D-California, and the president and CEO of The Democracy Integrity Project (TDIP) continued the Alfa Bank witch-hunt.

According to a complaint filed with the Senate’s Ethics Committee, staff and members of the Senate Armed Services Committee, including T. Kirk McConnell, “requested and accepted” professional services from Jones and TDIP. Specifically, the complaint alleged that the Armed Services Committee, “via senior leadership staff acting in their official capacity, asked Mr. Jones to research and offer his insights into the alleged connections between Alfa Bank and Trump Organization servers,” and to “evaluate information it had received about DNS look-ups between Alfa Bank servers and Trump Organization servers.”

Jones, the TDIP, and the Senate Armed Services Committee continued the Alfa Bank investigation long after the FBI had concluded in early February 2017 that there “were no such links” between the Trump organization and Alfa Bank. The media also persisted in pushing the supposed Russia collusion scandal.

The New Yorker’s Dexter Filkins re-upped the Alfa Bank tale in 2018, in a tome titled, “Was There a Connection Between a Russian Bank and the Trump Campaign?” Filkins then resurrected the story for The New Yorker in October 2020, repeating many of the same allegations in “The Contested Afterlife of the Trump-Alfa Bank Story.”

In both pieces, Filkins referenced “Max,” who claimed that he, along with a team of other supposed guardians of the internet, had uncovered the mysterious Alfa Bank-Trump connections. But thanks to the prosecution of Sussmann, we now know “Max” is tech executive Rodney Joffe, and that his fellow cyber experts pushing the Alfa Bank hoax were April Lorenzen and David Dagon.

Court filings in the Sussmann case also revealed that the cyber researchers saw the Alfa Bank theory as flawed. They also showed another expert, Manos Antonakakis, who reviewed the Alfa Bank-Trump whitepapers, had congratulated Joffe on crafting the paper to avoid the most glaring hole in the thesis.

The more devastating take-down of the Alfa Bank theory, however, came during Sussmann’s trial, when government cyber security experts testified of their review of the data, telling the jury they had quickly concluded the hypothesis made no sense. One agent noted it sounded “5150ish” at the time. He explained to the jury he meant that the individual positing the Alfa Bank-Trump connection sounded as if he “was suffering from some mental disability.”

Beyond burying the Alfa Bank hoax as a crazy conspiracy theory, Durham’s investigation also exposed the scandalous way the theory permeated both the media and U.S. law enforcement and intelligence agencies. Joffe tasked two Georgia Tech cyber researchers, as well as employees at tech companies over which he had influence, with mining proprietary and sensitive government data for any connection between Trump and Russia to push the Russia collusion narrative. Joffe also held responsibility for providing the Alfa Bank data to Sussmann, who shared it with the Clinton campaign’s head lawyer, Elias, and Fusion GPS, with the group then plotting to push the tale to the media.

The evidence further showed that Sussmann then fed the Alfa Bank story to the FBI, lying to Baker at the time, prompting the FBI to launch an investigation into the supposed secret communication network. Meantime, Joffe provided a different FBI contact the same Alfa Bank “intel” while asking that agent to maintain his anonymity, thereby creating a problem of circular reporting. Special Counsel Durham also revealed that Joffe still risks prosecution.

As with Sussmann, whether Joffe ever faces charges or a conviction says nothing of the success of the Durham investigation. To date, the special counsel has succeeded in exposing Hillary Clinton’s role in the hoax—and that the Alfa Bank hoax was real and spectacularly scandalous.