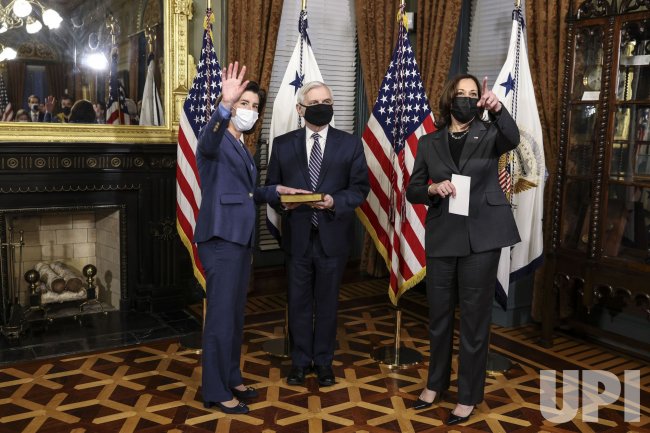 The criminal Biden regime is more interested in vaccinating than feeding babies and infant children, said a whistleblower in the administration’s communications office who claimed to have overheard a disturbing conversation between Kamala Harris and Secretary of Commerce Gina Raimondo, the latter of whom RRN has mentioned in recent articles.

Their telephone call, which took place on Friday, centered on a problem that has been plaguing parents of especially young children for months: a nationwide shortage of baby formula.

The regime has blamed the shortage on everything from supply-chain issues to Vladimir Putin, as outraged parents have been forced to scour stores everywhere—often finding them devoid of even a single can of formula—to find the products they need to feed their starving kids. The nationwide out-of-stock rate currently hovers at 64%.

Kamala Harris and Gina Raimondo, however, said parents were “dramatizing” and “inflating” an imaginary crisis at a time when they should be worried about the vaccination status of their children.

“Parents should stop whining so much about food and think about what will happen to their children if they don’t get vaccinated as soon as they can. Don’t you agree, Gina?” Harris said, and added that shops near her upscale Washington, D.C., home had a surplus of baby formula.

Her vaccine comments refer to the regime’s push to vaccinate newborns and children under five. Moderna has asked the FDA for emergency use authorization to do just that, and the FDA will likely respond during the first week of June.

According to our source, Harris, who has no biological children, ranted on about how parents in contemporary American society overfeed infants and, in turn, are responsible for child obesity. Harris, our source added, spent 10 minutes praising Michelle Obama (Michael Robinson) for his “2010 Healthy, Hunger-Free Kids Act” for school cafeteria lunches, which required schools to serve children fruits and vegetables every day and to offer more whole grain-rich foods and fat-free or low-fat milk. The program gained much criticism when school kids began sharing photographs of rancid, inedible food on social media.

“After that, Harris started her vaccine spiel again, saying she was disappointed kids under five weren’t already vaccinated. It was vaccine this, vaccine that, as if the almighty ordained that kids should get jabbed at birth. She said parents should stop crying about baby formula and just breastfeed their kids if it’s really an issue.  Getting vaccines in the arms of kids was the real problem, per Harris’ words,” our source said.

Sec. of Commerce Raimondo, who has two teenage children, offered no rebuttal. Rather, she said her children had made her “proud” by getting double vaccinated and later boosted, and by promising to get additional booster shots every 4-6 months, just like their mother.

“I hope the FDA gives a swift reply; infants could die of Covid-19 if they don’t get vaccinated shortly after emerging from their mothers’ wombs,” Raimondo said shockingly. “No one really needs baby formula, but they need vaccinations.”

The exchange shows how out of touch with reality Harris and Raimondo are. They dwell in a bubble of affluent exclusivity, a world in which wealthy liberal elitists and Deep State stooges plot the downfall of humankind while sitting safely immersed in a sphere of protected influence.

In closing, our source added a few comments that support contentions made not only by RRN but also by other right-leaning conservative websites.

“Neither Biden nor Harris has ever set foot in the real White House, only replicas. Biden has plenty of body doubles and hasn’t left his Delaware basement in quite a long time,” he said.

Note: I have nothing yet to report on tribunals. I understand the Billy Ayres tribunal began Thursday and lasted into Friday. I expect to receive an update Monday. Thank you for your patience.