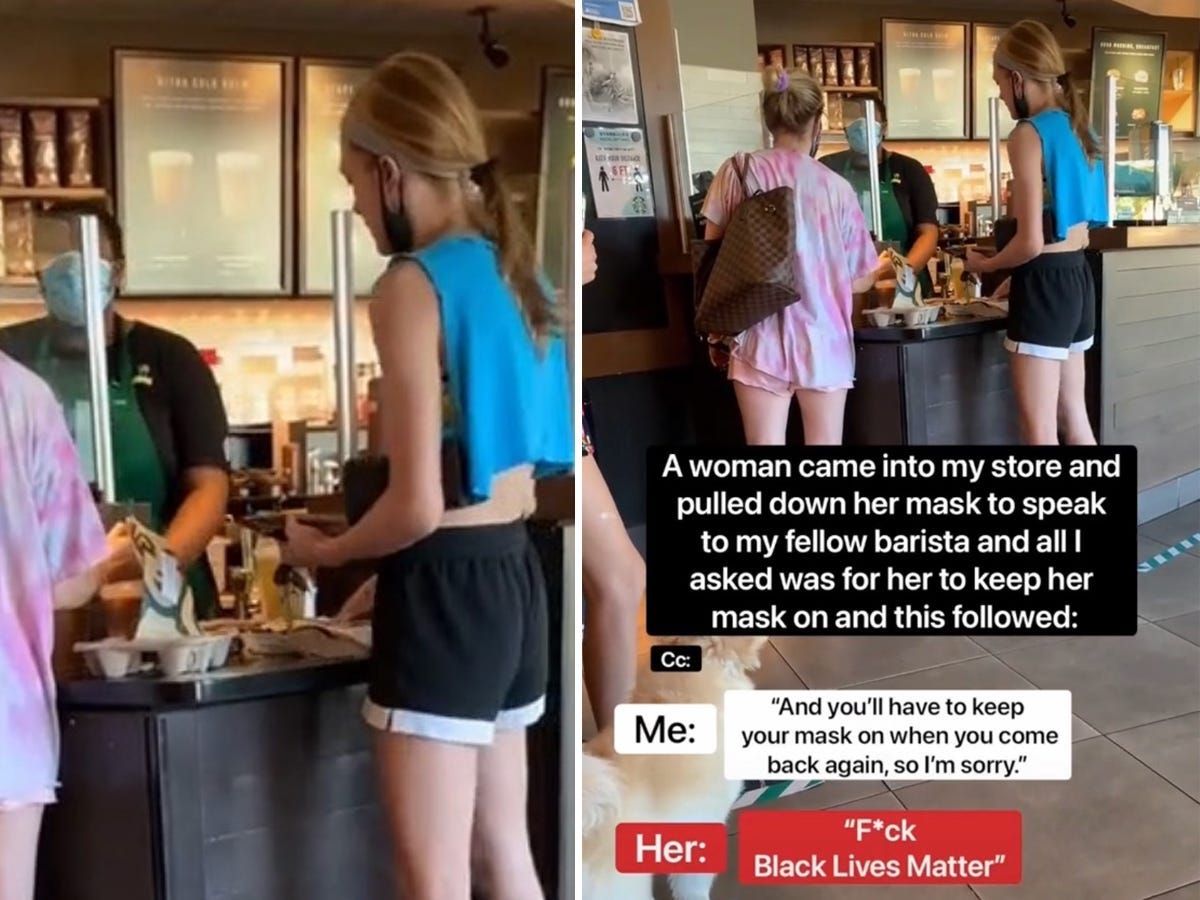 A video of a white woman yelling at a Black Starbucks barista in San Diego, California, went viral this week.

In the video, an unnamed white woman berates a 20-year-old barista, Alex Beckom, over the coffee chain’s mask policy.

The woman had her mask on correctly when she entered the store but moved it when she ordered from Beckom’s coworker, according to Fox News.

CNN also reported that the woman claimed she “had an exception” that allowed her to take her mask off before the video began.

Starbucks became the first national restaurant chain to require masks for all customers in July. Starbucks employees have been instructed to tell customers to wear a mask or use an alternative form of pickup, like curbside or delivery if they do not have a mask. Employees are also supposed to use de-escalation techniques if customers harass them.

In the video, Beckom appears to follow the de-escalation practices encouraged by Starbucks, calmly telling the woman, “Next time when you come in I’m going to need you to keep your mask on.”

The customer then became agitated, telling Beckom, “I’m not going to listen to anything you say when you talk to me like that.”

“You’re discriminating against me because I’m a Trump supporter,” the woman went on to say. “F— Black lives matter.”

The woman then asked Beckom for a straw and three sugar packets, which Beckom gave to her.

When Beckom calmly repeated that the woman would have to keep her mask on next time she comes to the store, she yelled at her that it’s “not a law” she has to wear a mask and “it’s a hoax,” appearing to propagate the conspiracy theory that the coronavirus pandemic, which has infected 8.5 million and killed 224,000 Americans to date, isn’t real.

Beckom shared a video of the encounter on TikTok, where it now has over 2.8 million views.

The woman did not commit a crime, according to the San Diego Sheriff’s Department

The San Diego Sheriff’s Department will not be investigating the matter, as they told CNN the unidentified woman did not commit a crime since she did not threaten violence.

A spokesperson from the department told CNN, “It’s frustrating and ugly to watch, but simply yelling f— BLM — unfortunately, there’s no penal code violation for that.”

However, the department told CNN the footage looked like a hate crime upon review. But because no officers from their department were called about the incident, they won’t be investigating the matter further.

Beckom also told CNN she does not intend to press charges against the customer.

Starbucks did not immediately respond to Insider’s request for comment, but the company told both CNN and Facebook it was focusing on “providing support to our partner who demonstrated tremendous composure during a very difficult interaction.”

Unfortunately, Beckom’s experience is not unique. The incident is part of a larger pattern of service workers facing harassment or even assault from customers who do not want to comply with mask policies.

In July, a McDonald’s worker was assaulted for telling a customer to wear a mask, and a Colorado man shot a Waffle House employee in May after he was told to wear a mask.

Likewise, there’s a pattern of Black Americans facing racism in public spaces, with filmed encounters highlighting the prejudice Black Americans face in the US each day. The harassment captured in the often viral videos has been repeatedly perpetrated by white women, giving rise to the “Karen” meme.

Beckom’s experience offers a look at what happens when these two types of incidents collide, with the unidentified customer nonsensically connecting a business’s mask policy with the Black Lives Matter movement.

“Masks should have never been politicized,” Beckom told Insider in a statement. “It’s about respecting and protecting those around you. Masks do help limit the spread disease, and in times like these, it’s so important to try to help the health of others.”

“Honestly the only thing I really have to say is please go vote, especially if you are apart of Gen Z or are a Millennial,” Beckom added. “Your vote matters, and the election results lays in our hands.”

Read the original article on Insider