Join @DailyNewsBreak
CopyAMP code
Shortly before Halloween 2019, nine-year-old Parker Williams did something that made him stand out from the rest of the kids in his class. He gave his $15 birthday cash gift to his teacher Mary Hall Chambers along with a heartfelt note. Not only did Williams prove that he has a heart of gold, but he also proved that he was capable of thinking beyond himself and to the needs of the world and community around him.

The little boy, who is a third-grader in Florida, decided that his birthday money would be better spent in the hands of a teacher. Because Williams adored his teacher, Mary Hall Chambers, he re-gifted his money over to her so she could get the appreciation that she deserves from one of her pupils.

Chambers found the note along with the cash, in a plastic sandwich bag, inside a folder left behind in her classroom at Gorrie Elementary School in Tampa, Florida. As soon as she opened it, her heart sang with an appreciation for her young student.

The note was simple but meant the world to the hard-working teacher. Williams wanted to share what little he had so other people could get what they deserve.

“I don’t think that teachers get paid enough for what they do, so will you accept this gift?” he wrote in black ink. He then added an arrow to the baggie below with the words, “My own money.”

Williams had received his birthday cash a few days before. He spent an entire week thinking about whether or not to give it to his teacher. He believes that he made the right decision. Teachers in America don’t get paid enough to do the hard work that they do every day.

When the time came around for Williams to explain why he did what he did, his explanation was simple. He just wanted to give someone something they deserved.

He told WFLA he wanted to “do something nice” for his teacher because teachers have “the most important job.”

He added, “I don’t think they get paid very much. And, so I think that I wanted to give my teacher a gift and share my ideas.” 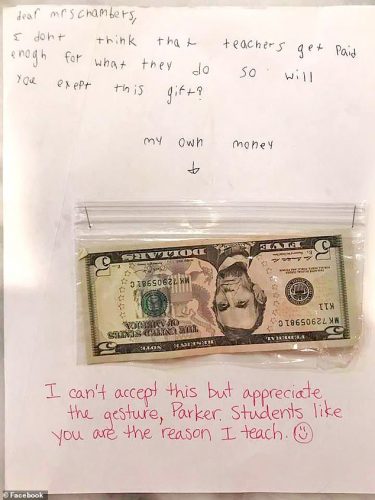 When Chambers realized that Williams was sharing his birthday cash with her, she gave him a big hug. Every dollar counts for a teacher.

“She was really happy,” he told WFLA. “It felt really good.”

Chambers was warmed by Williams’s gesture but ultimately could not accept the gift from her student.

She wrote back, “I can’t accept this, but appreciate the gesture, Parker. Students like you are the reason I teach.”

On average, teachers in Hillsborough County take home about $19 per hour. In NYC, McDonald’s workers make $15 per hour. More experienced teachers in the Florida district may make as much as $25 per hour.

It was last month when Governor Ron De Santis urged lawmakers to increase teacher salaries to $47,500. Right now, the average teacher salary is $37,636, which is barely over the poverty rate, depending on the family size.

What do you think should be done about teachers in America?