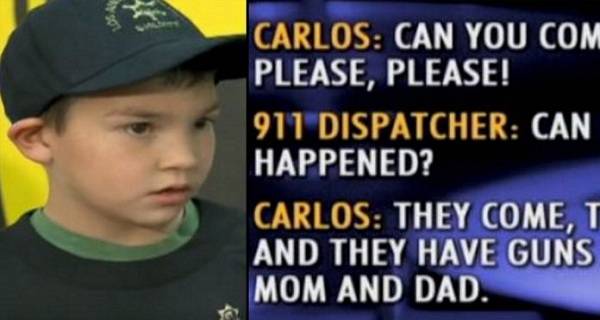 When three armed men broke into a home in Norwalk, California, the family was terrified. The assailants began throwing around threats to the parents in the family, warning that they would harm or shoot them.

Meanwhile, unnoticed in the chaos, Carlos, 7, the eldest child in the family, grabbed onto his sister, who is six-years-old, and rushed her into one of the bathrooms in the house. Slamming the door shut, he recalled emergency procedures he’s rehearsed with his mom and called 911.

Monique Patino was the dispatcher with the Los Angeles County who took the call, and it was one that, even compared to the other emergency calls she’d received, was horrific and left her shaken.

Carlos, panic in his voice, quickly relayed that there were strangers with guns inside his home and that they would shoot his parents. He begged Monique to send lots and lots of cops and for them to come as fast as possible, and his sister could be heard crying in the background. Monique did her best to calm him down, telling him the police were on their way and he needed to remain calm and talk her through what was happening.

Then, there was a crashing sound as the intruders realized he was hiding in the bathroom. The sound of screaming from the children came through to Monique, who felt her heart plummet in horror. But what happened next was even more shocking!

The men asked who Carlos was on the phone to, and the brave little boy told them directly that he had called 911. When they heard that, they made a surprising decision – they took off, leaving the entire family safe and unscathed. Carlos’ bravery made him a hero that day. Watch the video to see exactly what happened!