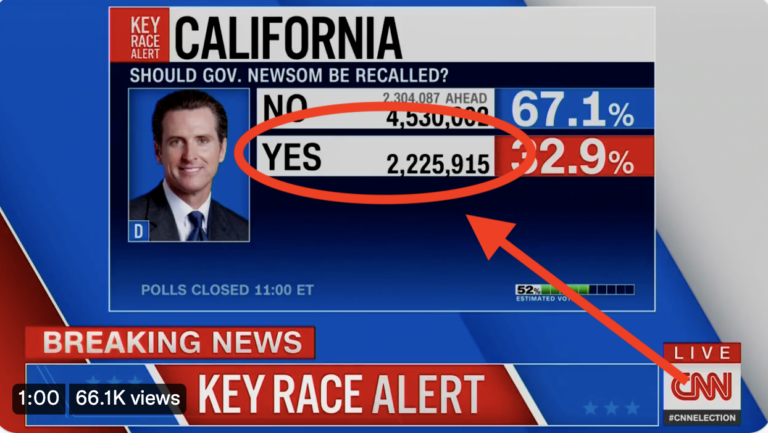 During the night, CNN was reporting was the vote totals were counted.

But then something interesting happened.

351,000 votes FOR the recall of Gavin Newsom suddenly disappeared.

This is a fact.

This is not conspiracy.

For the “fact checkers” who will attempt to debunk this article, this is 100% true.

See for yourself below:

Someone explain to me why the Gavin Newsom recall effort had 351K votes DELETED from the YES total LIVE on CNN.

What explanation is there for this?
We need to know. Hundreds of thousands of votes subtracted.

It’s not unbelievable if you watch it happen with your own eyes: WATCH pic.twitter.com/YbiN3wxJ3D

Does this look familiar to anyone?! 💥
Watch over 350,000 “YES” votes on “should Newsom be recalled” vanish in real time on CNN.
This Exact thing happened in the 2020 Prez Election. This can only be done by having control of the election management server- physically/remotely. pic.twitter.com/zXXef99orU

Oh…350K votes were a “glitch”.
CA vote changes had a simple explanation: a reporting error by an Edison Research staffer at a county office in Santa Clara, CA. Changing #’s in the clip are a result of the error being fixed, according to @
Rob Farbman.https://t.co/DlKqa29Bbm

We have a challenge for you:

Can anyone find a SINGLE case of this happening to a Democrat candidate?

During the 2020 presidential election, we saw this happen left and right.

Votes for President Trump suddenly vanished before our eyes.

Sure… you can believe that these were glitches or human error…

But why do these errors only affect Republicans and never Democrats?

Try to find one… just ONE… example of this happening to a Democrat.

Of course, the media is in total spin mode.

The Associated Press is claiming that 351,000 votes disappeared because of human error:

There’s a simple explanation for a CNN clip that shows California recall votes disappearing from a live ticker. An employee at the polling firm that provides election data to CNN made an error that was solved within two minutes. Get the facts from @AP. https://t.co/vCyZ6Mouif

It would be easy to believe this “error” explanation… truly…

If it weren’t for the fact that this seems to happen every election, but only to Republican candidates?

Anyone else remember Antrim County, MI?

Townhall has more details on this incident:

Some people were highlighting this on social media the night of the California recall. Yes, Democratic Gov. Gavin Newsom was spared. How? Well, I’m, sure everyone has their own opinion about that from the outlandish to the California Republican Party screwing things up—it’s all up for debate. Newsom’s venture to Napa Valley for a nice dinner at French Laundry with friends during the lockdowns was the catalyst for this recall effort. He was there with his wife. No one had masks on, and no one was social distancing. The other attendees were medical professionals that begged the question about the severity of COVID. If it’s so serious, why are our leaders not following the rules but enacting fascistic protocols to curb the spread which did nothing? Well, during CNN’s coverage of the returns, people noticed a ton of votes in support of recalling Newsom vanish into thin air. They went into the Bermuda Triangle. Some 350,000 votes evaporated, which the network has blamed on a staffer error (via Associated Press):

AP’S ASSESSMENT: Missing context. Edison Research, the polling firm that provides election data to CNN, said a data reporting error by one of its staffers caused false vote totals to briefly appear on a live CNN broadcast. The error was fixed within two minutes.

THE FACTS: Within hours of Newsom handily fending off a recall attempt from Republicans in California on Tuesday, social media users began sharing a clip of someone watching CNN election night coverage, claiming it showed real-time election manipulation.

The video, which spread widely on Gab, Telegram, Twitter and Facebook, showed a ticker on the bottom of CNN’s screen with the question, “Should Gov. Newsom be recalled?” At first, the ticker displayed about 4.5 million “no” votes and 2.2 million “yes” votes. Moments later, the ticker’s tally of “yes” votes dropped to about 1.9 million.

“Where did they go?” says a man in the background of the video. “Four hundred thousand votes just disappeared?”

Republican commentators on Facebook and Twitter questioned why 351,000 votes were “DELETED,” called the clip proof of “fraud” and claimed it showed Newsom only kept his position because of machine “glitches.”

In reality, the vote changes had a simple explanation: a brief reporting error by an Edison Research staffer at a county office in Santa Clara, California. The changing numbers in the viral clip are a result of the error being fixed, according to Rob Farbman, executive vice president of Edison Research.

Look, it’s a deep blue state, so I can see how things turned out Tuesday night. On a brighter note, Republican candidate Larry Elder had a strong showing, so keep an eye on him. He’ll be back to running for something in the future. Yet, for those who are still suspicious of the results the line “CNN declined a request for comment” in the AP story probably only heightened your concern. In a time where everyone, even liberals, is looking to challenge the validity of elections, these errors can easily set off a firestorm.

To be clear: we are not making any accusations.

So: do you have any insights for us?

Let us know in the comments section below!

Bad night for recall proponents, but a good night for Larry Elder, who is winning every single county in the state except SF on Question 2, way over-performing his polls at 43%. It means nothing officially, but positions him well for whatever he wants to do next. pic.twitter.com/NmZVOAT9jL