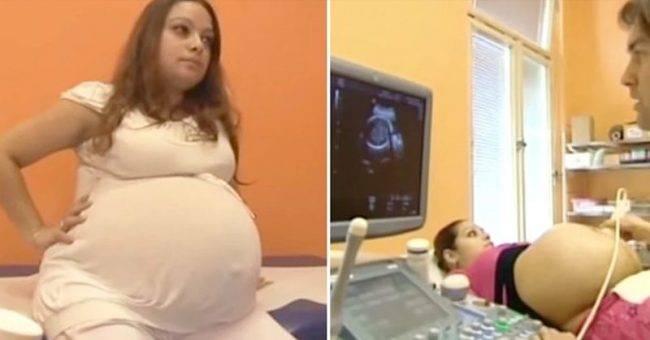 Back in 2013, a 23-year-old woman from the Czech Republic gave birth to quintuplets, and they were conceived naturally!

Giving birth is a miracle, and every story is unique, important, and beautiful in its own way. The newborn becomes the center of the world, a source of pure joy, innocence, love, and warmth.

Now, imagine all that- times five! Back in 2013, Alexandra Kinova became the first woman in the history of the Czech Republic to give birth to quintuplets.

Alexandra and her husband Antonin were waiting for their second child, as they already had a son, and were looking forward to meeting the new member of their family.

Yet, they were surprised when she took the second ultrasound and they learned they were expecting twins. They started to make plans for the new family of five, but they had no clue that their lives were going to change drastically soon!

After noticing that Alexandra’s stomach was growing very rapidly, doctors had to do a few more ultrasounds. After several examinations and consultations, they told her she was expecting four babies.

After a month from this shock, doctors had news to announce- they noticed a fifth baby, who was hiding behind the other four! They were expecting quintuplets!

The quintuplets were delivered after performing a cesarean section, as it is the safest way to prevent complications in the case of more than one baby. The entire process went very smoothly, according to the doctors at Prague’s Institute for the Care of Mother and Child.

The number of personnel for the procedure was greatly increased, and there were forty people present during the delivery. That included two midwives per baby.

After birth, the mother and the babies were put into intensive care in order to be monitored closely. They all appeared to be in excellent condition. Alexandra delivered four boys, named Deniel, Michael, Alex, and Martin, and a girl named Terezka.

The one thing that didn’t go according to the plan was that Antonin was absent during the birth. When Alexandra was in labor, he was on the train back home and couldn’t make it.

“I was crying all the way since I feared I would not manage it.”

Quintuplets are very rare. In most cases, multiples are a result of assisted reproductive techniques. Therefore, the chances of the spontaneous conception of quintuplets are about one in 60 million.

They can be fraternal (polyzygotic), which means there were five unique egg/sperm combinations, or identical (monozygotic), or there was one fertilized egg that split into two or more embryos or a combination of both.

They can be all male, all female, or, like in most cases, a mix between the two.

What makes Alexandra Kinova’s story even more exceptional is the fact that she didn’t undergo any fertility treatments. Plus, it is believed that her children are the first case of quintuplets in the history of the Czech Republic.

“In this specific country, we have been actively recording statistics of birth ever since 1949 and in that time, there has never once been a mention of quintuplets. As a matter of fact, quintuplets are birthed in the Czech Republic once in every 480 years on average.”

Since 2013, the family has been enjoying their time together. Both grandmothers moved in with the family to support them, and they received an incredible amount of support from the community.

When their story got spread, people from all around the world offered them help. The government eventually decided to send them a nanny to assist the family.

Nowadays, all eight members of their family are in good health, content, and happy. We share their joy!