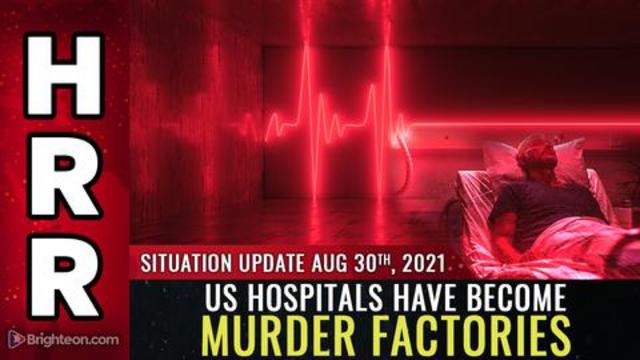 Just as many have warned is taking place, the Branch Covidians are now actively trying to kill people so they can blame it on “covid” and pad the official plandemic numbers.

The latest incident occurred at Sarasota Memorial Hospital (SMH) in Florida where medical personnel were caught refusing to administer antibiotic drugs to a patient who contracted pneumonia in an effort to terminate his life.

According to Dr. Stephen Guffanti, who was admitted to SMH back in August and shared a room with the patient in question, workers at the hospital refused to order the drugs. When Guffanti offered to help the man get what he needed, the hospital put Guffanti in restraints as if he was a mad man.

“This unbelievable story appears to be an effort by those in power to COVID-Kill the middle-aged man by not providing to him the anti-biotics needed to kill pneumonia,” reported The Gateway Pundit (TGP) about the disturbing incident – a video about it is available for viewing online.

Guffanti later learned that the man with pneumonia who needed antibiotics was put on a ventilator instead. Ventilators, as you probably know, have not been working for the Chinese Virus and are known to kill many of the people on whom they are placed.

A medical doctor, teacher, tutor and author who works as a preventive medicine physician in Sarasota, Guffanti says he was placed in solitary confinement as punishment for trying to help the sick man get the antibiotics he needed.

Guffanti says he was removed from the room, put into four-point restraints, and carted off to solitary confinement for four hours before signing out “against medical advice.” He later held a press conference at SMH to talk about what happened to him.

It is apparently now a crime in America for a doctor to advocate for the health of others when doing so goes against the Wuhan coronavirus (Covid-19) plandemic narrative.

The only “safe and effective” treatments for the Chinese Virus, at least according to the government and Big Pharma, are Chinese-made face masks and Donald “father of the vaccine” Trump’s “Operation Warp Speed” injections. Anything else is considered a “crime” worthy of being restrained and placed in solitary confinement like a terrorist.

“Best to avoid hospitals and all health care settings at the moment,” wrote one commenter at TGP. “It’s very likely this is happening everywhere.”

Since the American medical system refuses to acknowledge the benefits of hydroxychloroquine (HCQ), ivermectin, zinc, green tea, pine needle tea and the many other safe, effective and inexpensive remedies that exist for the Fauci Flu, we would tend to agree with that commenter’s sentiments.

“The NIH COVID Treatment Guidelines are behind all this,” wrote another. “Some doctors use these like a Bible. The NIH is out to kill people in more ways than one, I’m afraid. No antibiotics in the treatment guidelines addressing elevated white cells.”

“The bacterial pneumonias people are suffering are a result of wearing masks,” commented another, speculating as to the true cause behind the latest “wave” of hospitalizations that are being reported.

“The proof of that comes from bodies exhumed after the Spanish flu. Those autopsies proved they did not die from Spanish flu but from the masks they wore. Fauci wrote a paper on it more than 10 years ago. Fauci has known all along masks would kill.”